Life has a way of evening out things. It keeps you humble but later will lift you up. And, fly fishing is just one stage of many where that happens to me.

After a lights-out session a few weeks ago during a Top 10 Day when I could do nothing wrong, life stepped in and tipped the scales. Last week, I hit the usual runs with the usual flies that had previously crushed it. I was hoping to repeat that “magical moment” of 18+ fish eager for homemade flies.

It was humbling. I worked hard for hours, skipped lunch to keep focused, and finally called it quits. I had only one take from a six-inch parr, which was a great way to work off the skunk but still left me befuddled. To be fair to me, there had been a cold snap the night before. To be fair to the river, I gave it everything I had and it won, fair and square.

So, when @wrongfly (Bill Hager) reached out to see if I wanted to fish with him, it was a great opportunity to hang out with him and to see if I could get a better hand from the dealer this time.

I didn’t, at least for a long time.

Bill was a phenomenal tight-liner, an aggressive wader, and clearly had incredible instincts. He landed fish after fish, while I tried my best and was skunked. After quite a few hours, I did manage to dupe a (you guessed it) six-inch parr.

Bill and I bounced from spot to spot, and he showed me a new stretch of water. It was nice to fish a new area, but that too was futile for me. Bill meanwhile continued to have incredible mojo.

“Only caught a few there,” he said humbly as we walked back to our cars.

To be honest, I wasn’t feeling that great about things at that point. A few hundred casts in, I felt like a rookie again. But I’ve had days like that. Statisticians talk about “regressing to the mean.” You may have an incredible outing one day, but the next one is a bit meh. Or, you may be skunked one time only to return another day to find eager trout. If you have an outlier day, you’ll eventually experience the opposite, which will get you back to the statistical average. There’s a Life Lesson there somewhere: a string of bad days will eventually end. 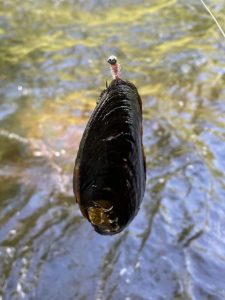 I didn’t raise the topic of lunch with Bill and nor did he. I ate some snacks and was feverish about continuing to fish to somehow tip the scales back in my favor. Bill continued to smoke the fish and at one point a really big one broke off. He generously walked away after getting more takes and said: “You fish it.” I declined and protested but he already was a bunch of steps up river and likely pretended that he didn’t hear me.

I eagerly drifted some flies, promptly got snagged, and snapped my Euro sighter. It just wasn’t my day! But I did see a mollusk. And it was nice to be outside. So I focused on being grateful for that and, honestly, I then felt pretty OK about things. It was a beautiful day. Sunny but not too hot or humid. It was a Top 10 Summer Day.

Thankfully, I had spare sighter material in my fishing bag and was able to re-rig. We moved spots. Bill was immediately onto fish. I switched to an old Stonefly pattern of mine and teamed it up with a size 20 Midge emerger. Two drifts in, this showed up.

It’s trite but true: when I felt a thump on my line and set the hook, nothing happened, and I thought I was snagged. Then, the snag started to move. The trout’s first instinct was to burrow deep among structure. It felt very heavy and strong, and I couldn’t lead it away. So I tightened up and just held on, hoping I could lift it off the bottom slightly.

Eventually, the fish panicked and surged to the other bank. I felt some monstrous head shakes and powerful tail swipes. The Thomas and Thomas Contact 2 had an incredible ability to absorb such acts and protect light tippet. At one point, it felt like I had a foul-hooked fish, unfortunately. After some back and forth, I caught a glimpse of the fish and realized that it was fair-hooked. And it was huge. Incredible surges and energy.

It was a wily fish, and at one point it seemed to rub me off on some structure. I was stuck on something, that something wasn’t moving, and so I yanked the rod with great sadness. But, I then felt more movement.

Eventually, I landed the fish and felt great relief. I saw the size 20 fly in its upper jaw. The Stonefly had broken off at the dropper knot, and I realized just how lucky I was on 6x fluorocarbon.

Bill cheered from the other side of the river, and it did feel great to see such a beast of the fish. It was a stocked fish, but I didn’t mind. It taped at 19.5″ and was a real fighter. 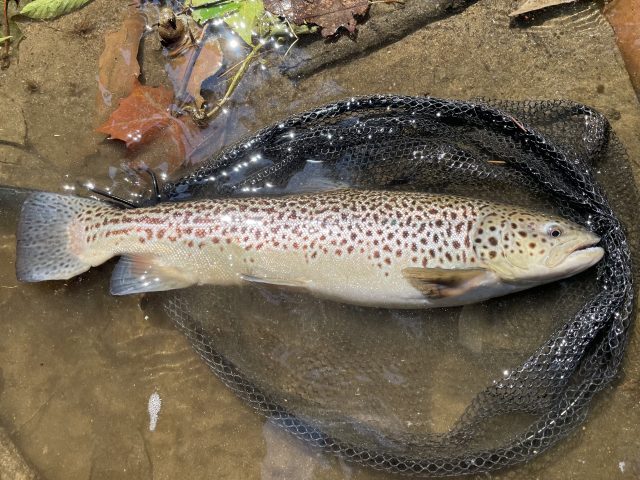 After that, it wasn’t like the switch flipped or anything. I fished some more and had only one stockie ‘bow to show for it. Eventually, the hunger got to me, and I called it quits at 5 pm.

Such a curious day. Fly fishing is and always will be mysterious. Some days are great, some are challenging, and most are in-between and hover around the mean.

I love it, though. It is a challenge nearly all the time and worth the effort all the time.