Most years I do take a bit of a break from fly fishing.  This normally happens around late December or early January.  It’s just the natural flow of life and seasons, and I kind of enjoy a short mental break from the weekly schedule jenga required to sneak in some time on a river.  As Jo explained, life has a way of evening things out, and I can think about fishing all through the winter.

Thus I found myself on a disorienting midsummer fishing hiatus.  I could make any kind of excuses from the personal to the local to the global level.  Some recent health issues had slowed me down.  The unsettling haze that settled over New England’s rain soaked soil, borne of the extensive wildfires blown over from rain-starved forests in Oregon and Canada was enough to bum out anyone who uses the outdoors as an escape.  There were also the humility lessons dished out to humanity by the nearly inanimate COVID-19 virus particles.

I figured I would be fishing again at some point, and that it would make me happy when I did.  But in truth in the back of my mind I was a bit nervous: what if “it” didn’t come back?  I shuddered as I had a nagging thought: what if I had matured into a normal, non-angling adult that would get all my work done around the house while only fishing occasionally?

My lovely wife had set us up for a few days off at the family camp on a pond in NH (more here in a previous post from 2018) and a night without the kids. True to old habits we planned the time off in advance around the late-summer full moon (for the after-dark top-water bass bite). After we arrived and unpacked, we ended up drinking tea on the couch and falling asleep to the Red Sox on the radio.  The long work week had slyly drawn a dark curtain over any night-fishing antics.

The next morning my fishless thoughts were putting down roots after we squandered an ideal full moon fishing opportunity.  My wife advocated for a late-morning fishing trip, and we had a nice cruise around the pond.  We landed nine largemouth bass between us, but my brain was still gnawing at me: I had caught my bass on rubber worms!  No one type of fishing is superior to another, but I’ve considered myself a flies-first-and-foremost fisherman for quite a while.  Maybe my fly-fishing card had expired!? 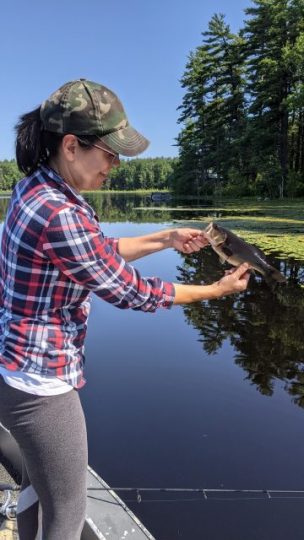 During that week I had received a much awaited delivery of a repair on a bamboo rod I had sent off last August.  I had brought it with me and took it out, admiring the handiwork of the maker/repairer.  I had forgotten how beautiful the flamed bamboo was, and the newly replaced ferrules glowed a golden bronze that complemented the hand split cane.  The kids had arrived by this point, and my son Wynn asked if I wanted to take the boat out on the pond.

Wynn insisted I take the front of the boat, and handed me some small double-barrel popper flies that we (mostly he) had tied over the winter.  I strung up that bamboo rod and started laying out line and hitting crevices between lily pads, feeling the strength and smooth power of the rod.  The popper called in some small feisty largemouth bass for some vicious attacks on the fly.

Before I knew it I was having a ball, systematically plotting my next cast and using the fine casting tool to execute.  It all came together, a nice summer day being guided onto fish and onto fishing by my son.  We begrudgingly headed in when we were called in for dinner.

After a campfire guided us past sundown, my son, my wife, and I rallied to head out in the dark on the starlit pond. We spied a deep-red moon rising through the trees, a unique debut on account of the imported wildfire smoke.  Once again I was in the front of the boat, casting and probing the near dark with splashes and pops of top-water lures.  We heard my jitterbug bubbling along, only to be interrupted by a flushing sound.  A nice four-pound bass took to the air.  We peered at the wide-shouldered fish next to the boat, illuminated by our headlamps.  As it turned and cruised back to the depths of the pond like a ghost, its departure signaled a return of my fishing passion. 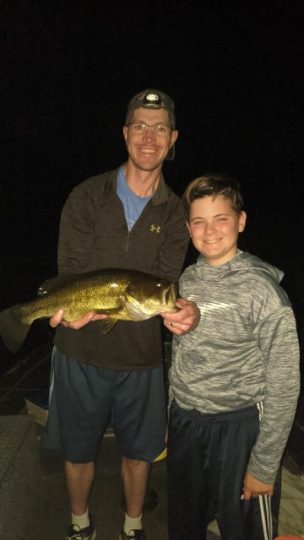 My son stirred me at five am the next morning, convincing me with little effort to forsake my warm bed for the cool air over the pond.  This was a bit of an upset as, after having gotten off the water after midnight, I assumed he would sleep in.  This time I made sure he was in the bow, and he put his poppers to good use on his fly rod and nailed several plucky bass.  We had a ball, and eventually he asked me to switch back to the front.  I landed some nice fish.

When we returned about three hours later, my wife wished me a happy birthday.  My son sheepishly did the same, and I laughed and told him not to worry as I admitted I had forgotten the date myself. I was too distracted by my passion for fishing.  I can’t think of a better birthday gift, and I’ll be back on track to be behind on all my yard work! 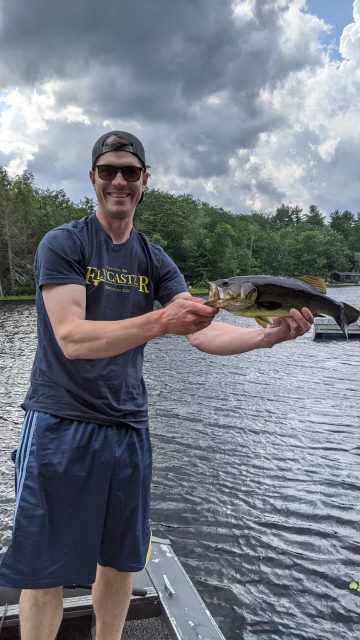