My family is lucky that we have a place in New Hampshire located on a warm water pond.  It’s the type of place that oozes character and family history.  It was built by hand by my father’s uncle and his family in the 1950s.  There was no access to electricity at that time, and more than 60 years later, there still isn’t.

To access our camp, one must traverse more than a mile of progressively smaller and rutted dirt road by “bearing right at the big rock” and correctly interpreting other equally dubious landmarks.

The pond has remained mercifully undeveloped, with only one year-round home and about a dozen other “camps” of varying sizes and shapes, with a few in various states of decay.  I have been fishing the pond since before it was sold to my father in 1989.

Legend has it that the Carr forefathers would go fishing in the evenings on other ponds and bring back the biggest largemouth bass to populate our pond.   Seventy years ago this was not considered environmentally unfriendly or illegal; it was simply standard practice.

The result is that today there is a healthy population of bucket-mouths and chain pickerel.  Almost every bass caught is fat enough that you are thankful it decided to cram in your fly on top of whatever else is bulging in its belly.  There are a few that grow quite large, and I have had nights where I can focus on large fish only and catch close to 30 pounds of bass on top water.  Unsurprisingly, it’s one of my favorite places to fish!

After graduating from worms and bobbers used as a grade school boy, I spin-fished the pond with plastic worms, Rapalas, and hard top-water lures like jitterbugs and hula poppers.  Once I learned to fly fish after college, I took plenty of fish fly fishing with mice, hard-bodied pencil poppers, and deer-hair poppers as well.

But to catch the biggest fish, I typically fished solo well after sunset.  Managing the canoe, fly line, and tangling with thick tailed bruisers in the dark was a bit much, and I usually ended up spin-fishing with big hula poppers and jitterbugs and picking a few spots to fly fish. However, after my parents and I bought an old bass boat last year, I had high hopes that would make it more doable for working big flies under the full moon.

All of this is my long winded intro to one of my tying projects for this year:

The double barrel popper from fly fishing caught my eye, as it looked like a way to recreate the deep “pop” of a hula popper in a fly-friendly format.   And, it is.  (YouTube tying tutorial.)  I tried it out by ordering medium, large and XL heads.  I was pretty excited when even the first few attempts I made caught fish when just “testing” them out during the day on local ponds, with medium-sized bass nailing even the size large popper in broad daylight.

I was pretty amped to throw them at the camp last week.  I’ve got an older Sage RPL 8 weight that throws the XL popper well, and after hearing the deep gulpof a hefty bass taking the black XL popper I had tied, that rod was bent over right to the cork by a solid four-pounder.

There’s nothing quite like the thrill of a largemouth digging for the weeds with the power of a fish several times its size.  Once that doesn’t work, they take to the air and puncture the quiet of the night with huge splashes.  It’s typically a short, intense battle (as long as the line and knots hold).  I had a nice 20-minute run where I landed two bass over four pounds in succession, and then had a few hours of quiet casting with only smaller fish landed. I did not see any of the real behemoths that can push up to the six- and seven-pound mark on this trip.  But, proving the poppers can work and spending some time on the water goes down as a victory for me.

Another highlight was watching my son land his biggest bass to date, a nice four-pound fish that he played and landed quickly.  He was pumped, and since the whole family can fit on the bass boat, we were all there to witness it.  I am proud to say that he also went on to fish the pants off of me on the final day, landing eight bass and two pickerel to my single bass.

More important was that he did it entirely on his own by tying his own knots and picking his own fly or lure. When he started laughing at my small 12-inch fish as I lifted it from the water, I swung it across and smacked him with it, leaving a wet mark in the shape of a bass on his leg. There is only so much boasting even a proud papa can bear! 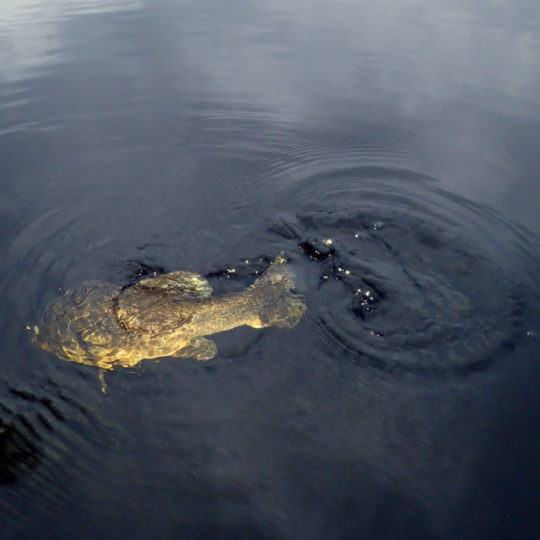