I forced myself not to sleep through the 3:30 am alarm yesterday and dragged my sorry butt into the car for a ride to the river. I had met up with an old friend Friday night, and some could say that we were a little aggressive on the drink ordering at the bar. But I’m good with all that, as we in New England can now actually meet up with friends indoors and share some beverages. What a transformation it has been!

I worked through the fatigue and cotton mouth, slid into the car seat, picked up some coffee at the Golden Arches, and made a game plan as I drove. Streamers in the morning, I thought. It should be about streamers.

When rain is afoot and the sky is grey, I’m a big fan of throwing flies that fish can see and sense on their lateral lines. For a while, I used to throw really big articulated streamers, which was fun to do, tough on the shoulder, and brought some hogs to the net. But these days, I’m throwing small ones of the #8 and #10 persuasion. Something big enough to warrant a gulp but not so big that it looks unnatural.

And streamers delivered. The water was up and stained. In one 20″ x 40″ stretch, it was fish after fish, and who knows why they were there and why they were eating. A second run also yielded its goods. This brown taped at 16″ and fought like it was bigger. When fish eat a streamer, there is no doubt about those strong takes. They mean business.

At mid-morning, the streamer bite stopped and it didn’t matter what I threw or how I manipulated the fly: the fish were done.

I bounced around, threw some wets and then dries for chuckles (was blanked), and resigned myself to nymphing. I threw the bobber occasionally, but it was mostly a tightlining game in the afternoon. I started with natural-looking nymphs, moved to attractor patterns, and finally decided to give up and threw junk, which was what the fish really wanted. You really cannot stop the Mop, and you have to affirm the Squirm(y). This 17″ brown wanted weird-looking protein, and I was happy to oblige. It was an absolute tank, and I’m so grateful my knots held. It could have gone either way.

The fish seemed clever. A few dashed for rocks and broke me off. One guy rubbed me off on a branch and somehow did a Houdini, leaving my fly wedged on the debris. After giving my leader a workout all day (and all spring), I snapped my sighter when trying to retrieve a stuck fly. And that seemed like a sign not to do another 14-hour outing. After 10 hours on the water, it was time to refuel at Subway and head home.

Honestly I would prefer a sunny July 4th weekend, where everyone is outside, grilling, and drinking some cold suds. But we take what life gives us. For me, a good day of fishing was a fine Plan B. Fly fishing is always better when it’s raining and today was no exception. Some good lemonade from the lemons at hand.

A happy 4th of July weekend to all…. 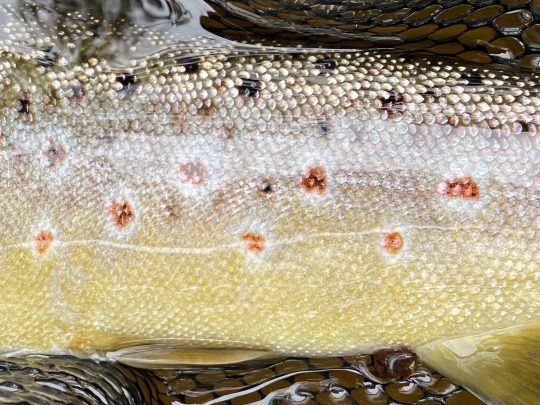 3 thoughts on “Those Strong Takes”