As the sky darkened and the gentle rain became a legit downpour, it seemed like an exciting way to kick off Sunday’s blog team gathering: it was time for Drakefest. Joe Drake sadly is moving down to Virginia for a new gig, and we thought it would be awesome to gather in the woods and have a cookout.

Jamie Carr kindly hosted us, and we were an eager crowd. I arrived before our set time to gather but was nearly the last car at the camp site. Jamie and Joe already had a roaring fire going, and we were determined to cook dinner over a wood fire and coals. Gas-grilling is always a great option, but the chance to unleash our inner pyromaniacs should always be heeded IMO.

Everyone contributed, from grilling hardware to garlic bread to salad to Jan’s famous hashbrown casserole to watermelon to beer. Jamie, Dave Hyde, and Bill Hager made sure of all that. I brought some strip streaks, and Joe provided a venison backstrap and a tenderloin. If you know Joe, you’ll know that he’s a great angler and a gifted hunter, and we were beneficiaries of two deer, one harvested locally and a second from Indiana.

Joe also already has lived a full life: research in Scotland, firefighting in the back country, late-night driving in the Arizona desert, an adventure in Micronesia, and living out of his truck for three years as he did both research and government work. He tells the best stories!

As the rain continued, we switched into our waders, which I think is the best rain gear there is. As the coals developed, we got to work grilling the meat and some vegetables. 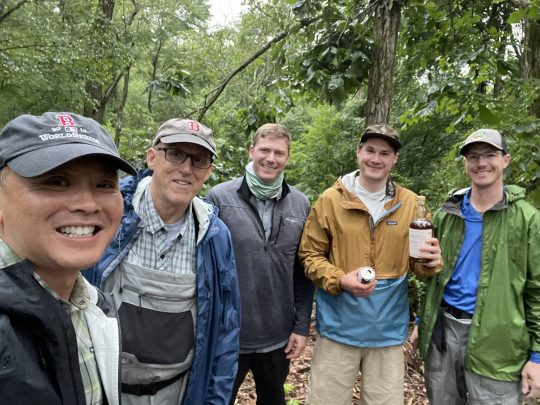 Ashu Rao called in from Maryland to say hello, and we gave Joe some Balvenie 12-Year to say farewell (on a side note, we also had an event when Ashu moved–‘Shu Fest–last February in 14 °F weather). The good news is that we now have two blog team members in the Mid-Atlantic region, and I have a feeling that blog team reunions in Maine will lure Ashu and J.D. back! Our team are suckers for wild fish.

I’ve spent good time on the water with Joe, but here is my favorite photo of him. It’s not a fish pic. 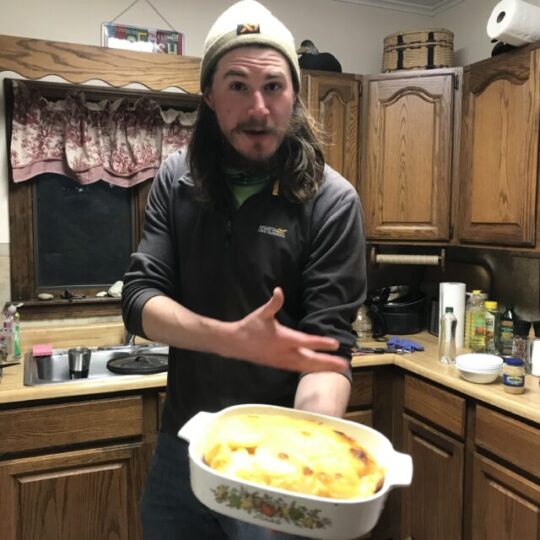 We were up in Maine for a blog team weekend, and Joe cooked us a pineapple upside down cake in a Dutch oven nestled among some hot coals. The gas grill didn’t work well at the house we were renting, and so, Joe nonchalantly built a fire and cooked venison burgers and dessert outside. We call him our Renaissance Man, and he truly is a man who does all things well.

J.D., we’ll miss you. Have a safe move, and we look forward to fishing with you again when you’re back to visit! BlogFlyFish.com friendships live forever.

7 thoughts on “The Great Drake”