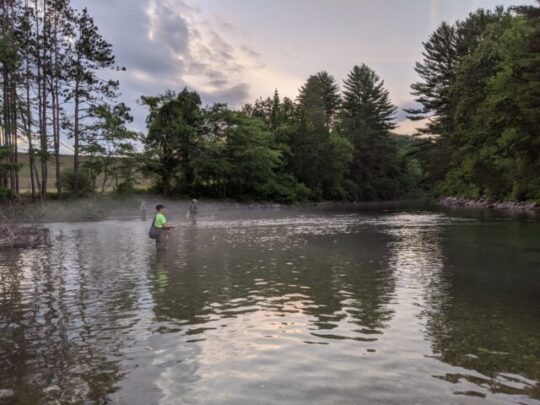 The Swift River’s trout have a well-deserved reputation.  On the average day, the angler can expect to encounter trout that have variously been described as discerning, persnickety, stubborn, educated, rude, aggravating, spiteful, picky, frustrating and uncooperative.

Of course there are periodic breaks when MassWildlife brings in fresh blood, but the truth is that even the new-and-naive fish do not stay that way for very long, as the anglers start giving them their classes on artificial-fly identification as soon as they hit the river.  Get one question wrong, and you get caught.

When I first returned home to Massachusetts after learning to fly fish in Pennsylvania, I was making weekly trips to the Swift.  I was getting my own education from the trout, as the clear water and high density of fish allow you to get instant feedback on how the fish are reacting to your flies.  I felt that all of the near-constant rejection really helped me with my early learning curve.

This river presents a unique opportunity to learn fast from fish feedback, and with persistence I did start to catch fish consistently.  I thought it would be entertaining to cover all the various forms of refusals I have seen on the Swift, from the common to the exotic and head scratching.  The truth is that by watching carefully and studying behavior of the fish, they will tell you a lot about your presentation.

THE COLD SHOULDER
This is probably the most common.  You are excited about your fly selection and you are pretty sure you got a nice drift at the right depth, but the fish shows no visible reaction on multiple drifts.  Believe it or not, it could be worse (see below).

This behavior has been known to make an exasperated angler exclaim “Well, for Chrissake at least look at it!”  What the fish is telling you: most likely this means you are getting a good drift, your tippet is not spooking the fish, but your fly is not triggering any sort of feeding response.  The fish may not be actively feeding; try changing your fly type, fly size, fly color, or moving on to a different fish.  As a way to maintain confidence you could also try convincing yourself that any particular fish may just be blind.

THE SLIDE
As your fly approaches a fish, they calmly slide out of their lane to another position. Often they will slide back to their preferred lie after a few moments.

What the fish is telling you: something about your presentation alerted the fish to danger, most likely an unnatural drift or recognizable tippet.  Try lengthening your leader to keep your fly line farther away from the fish.  Try sizing down your tippet and changing the way you position yourself and manage your drift to present a fly to the next fish you target.

THE GLANCE
As your fly approaches a nice rainbow, the fish moves about two inches towards the fly and quickly reverts to its previous position.  You are left thinking “I think he looked at it.  He might have looked at it. Did he look at it?” Despite the rejection progress has been made!

What the fish is telling you:  your tippet, presentation and drift were pretty good, but although it was initially interested, something about the fly tipped him off right away that it was facsimile food.

Try making multiple drifts, and see if you can get a different type of refusal.  Most likely you should try changing flies.

THE INSPECTOR
After making adjustments to avoid the reactions above, you get to the point where a nice fish moves towards your fly, eyes it warily, gives it a good long look and decides it is not suitable for consumption.  More progress!

What the fish is telling you: Check to see if there is an expiration date on your fly that the fish noticed before you did.  Taking this same setup to another fish might result in success, or try slightly altering just the size or color and making the same type of presentation with a very similar fly.

Important side note here: always be mindful of your approach.  I think a lot of anglers assume that if a fish does not move or swim away, then they do not see you.  The fish CAN see you, it is just not feasible from an energy efficiency standpoint for these pressured fish to flee every angler they see.  A fish that is unaware of your presence will give your fly a much less jaded review.

THE REGRET
After inspection your fly and passing, the fish decides to leave the area.  What the fish is telling you:  we all make bad snacking decisions that taste good but end with regret.  Like the time you ended up eating an entire bag of Wavy Lays potato chips in one sitting….

I swear some of these fish get embarrassed.  The fish acts like it can no longer trust itself around artificial flies that look so tasty, so it decides it is safest to avoid them.  Trust that even though you did not get a take, you are gaining a mental edge and gaining the upper hand!

THE FRENCH KISS
After inspecting your fly and apparently deciding to eat it, the trout positions itself with its lips on the fly.  It assumes a neutral drift and goes along with the fly in such a way that the fly is almost, but not quite in its mouth.

Generally, the angler will pull the fly away too soon, making the (reasonable) assumption that the fish was going to eat the fly.  In that case the fish wins the battle of will.  These standoffs can drag on for several seconds; the end result might be a take, or a refusal.

What the fish is telling you: you are doing a lot right, and possibly nothing wrong. Slow down that trigger finger. Stick with your setup and approach and good things will come.

THE PICKPOCKET
This is effectively the opposite of the French Kiss.  A trout will eat the fly and spit it out faster than you can set the hook. Your indicator will remain blissfully ignorant of this type of take.

What the fish is telling you: speed up that trigger finger!  I have sworn to secrecy two fellow anglers who witnessed a sizeable brown trout “pickpocket” my small nymph four times on four great drifts, with me setting the hook and only hooking the river each time.  Swift River brook trout actually go through performance checkpoints where they must pass a pickpocket test before they continue moving upriver.

THE BOMB SCARE
This is perhaps the most surprising reaction.  After a fish carefully inspects your fly, and rejects it outright, it swims away at maximum speed without stopping until it has reached another section of river without you in it.   To quote my son Wynn: “That fish acted like your fly was a bomb!”

What is the fish telling you?  Well, this happened when our friend Steve gave us a fly that he had taken several nice fish on earlier that day.  Although not difficult to interpret, the cause is not clear.  Our working hypothesis is that Steve had already caught and landed that fish on that same pattern earlier in the day, producing a strong negative reaction from the fish.

THE FICKLE FISH
After inspecting your fly and rejecting it, the trout begins to have second thoughts.  As long as the drift continues, it returns to inspect the fly again.   This process can repeat three or four times, or for as long as you can maintain a drag free drift. Sometimes the end result is an attempt to take the fly, usually just as you give up on the drift.

What the fish is telling you: the internal conflict is palpable.  Your fly and presentation equal food, but something is making it hard for the fish to commit.  Try changing your brand of hand sanitizer.

THE BUFFET LINE
This ignominious honor is bestowed upon an angler when four or more fish reject your fly on a single cast.  What the fish is telling you:  your drift is true, your presentation is spot on, your depth is correct.  There is an almost unanimous consensus that your fly is almost good enough to eat.

THE NOSE
Now I am certain many would not believe me on this one, but I swear I have looked through the calm glassy surface of the Y-pool and seen trout cautiously approach my dry fly.  As they hover just beneath it, they lift up and touch the bottom of the minuscule fly with the top of their nose as a way of inspecting it.  What the fish is telling you: tip your hat, pick a different fish.

THE NATURAL
In this case the fish refuses a real, actual live bug.  There is no hook in it, no line attached, no thing that can give it away as a fake.  I have seen this several times on the Swift.

What the fish is telling you: don’t give up on your presentation when you are getting rejections.  Not every choice to turn down your fly is due to something that you can control.  You can’t make your fly look more life-like than a real fly!  This is the one refusal that may instill a private contentment in the angler.

Want to improve your odds? Find one fish that is actively feeding; I would rather target one actively feeding fish than 20 you can see but do not appear to be feeding.  If you can find two feeding fish, and make a stealthy presentation, you can overcome a lot of issues with fly selection, fly size and even tippet. Easier said than done, of course.

THE TAKE
A nice trout eats your fly with a sense of purpose and commitment.  (As long as the take did not happen when your fly was dangling unattended in the current), that fish is telling you: you did it! You cracked the code!  Your success as a predator has been validated!  This means you learned from all of the refusals above, and you are ready to go catch every fish in the river.  Unless you lose that one lucky fly of course, or you see all of the behaviors above from the subsequent fish…whichever comes first. 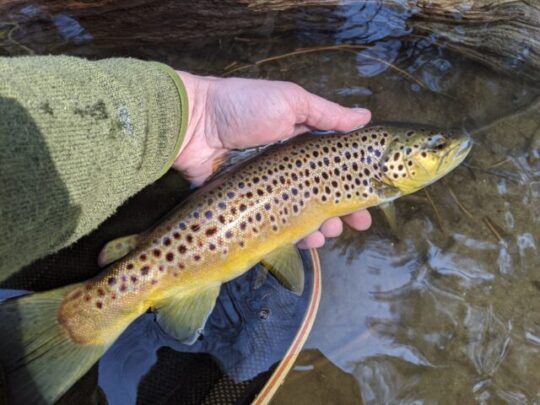 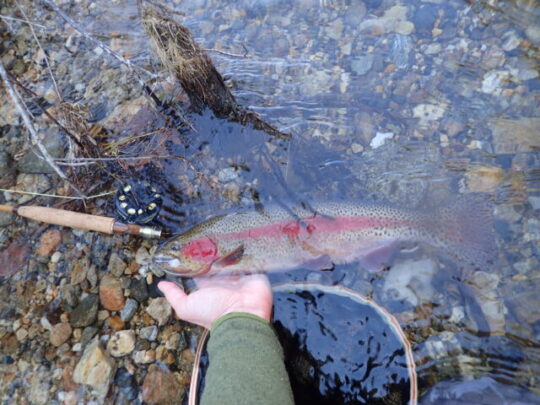 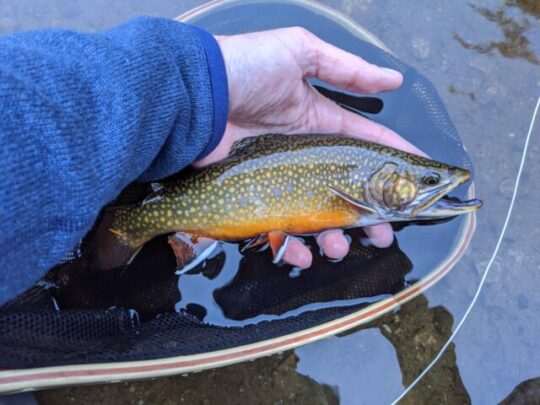 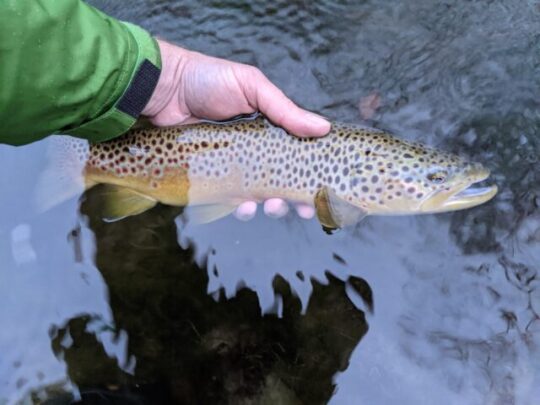 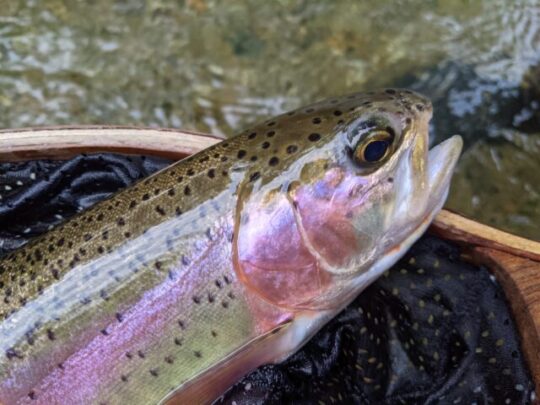 10 thoughts on “What to Make of a Swift Rejection”