January can be a cruel month for fly fishing. Yet, fellow blog team member, Ashu Rao, and I decided to roll the dice.

With drizzly rain and clouds all around, it seemed like an OK time to throw big bugs. The streamer game is a low-percentage technique, usually, but what’s the use of having some homemade ones if you don’t fish ’em? (And, if you can’t fish, making six-inch articulated streamers is a great way to kill time while you sit next to the fireplace and play old tunes.)

I hit a favorite stretch and found nary a bump. So, I switched streamer colors and doubled back to hit the run again. That’s when the luck of 2021 struck. I connected with a nice brown that was directly below me. I strip set, tightened the line, the fish rolled up top and the barbless hook popped off after a mean-looking kype burst through the surface to give me the stink-eye.

I’ll be back for that one.

With water high, it was easy to see the dark and quiet seams where trout may hold. Plus, I’m not a fan of the bobber unless I can help it, and so, I kept throwing big streamers both out of curiosity and to keep warm.

I walked to a different spot where I’ve had previous luck and found no takers. Ashu and I chatted as we fished and worked our way down river. It’s good to fish with an old friend.

There’s a particular tail-out that always looks so fishy but leaves me empty-handed. But, this time, I felt a thump at the slow-moving-and-bubbly water. A very strong fish pulled and pulled. Surprisingly, it was a chunky rainbow hanging out at a stretch that is far, far away from where rainbows are normally stocked. A journeyman.

The seven-weight did its job, and I was absolutely thrilled to see a dazzling fish aggressively nosing the net and eager to be free. 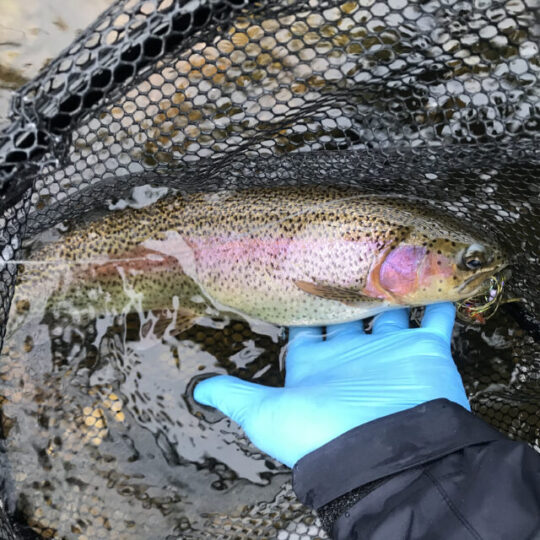 Ashu and I hit some more spots, and it was very slow-going. At one point, I switched to a Euro rod. A fish gently sipped a slowly moving CDC soft hackle pattern (I was “floating the sighter“). I saw a very large brown trout rise, shake its head, ponder its situation and then go bat-s**t crazy. This was the Fish of the Day for me, I thought.

After some back and forth, I started to gain line and thought I might have the upper hand. The fish, of course, presciently predicted something else. It suddenly tore towards the middle of the river and broke my 6x on a rock-and-timber pile at which I’ve lost many flies over the years.

Now, that was a wily fish. I’ll be back for that one, too.

Ashu and I kept plugging away, visiting one spot after another. We tightlined and threw the bobber. I mixed it up by swinging wets and throwing the big bugs. After eight hours on the water with almost no breaks, I was pooped. Ashu is a marathon angler, and I did my best to keep up with him.

It was a typical January outing: hopes can be high, and the fish usually have other ideas. But, it was a great time to be outside. And, who knew that big articulated streamers would be the best technique of the day?

Happy New Year, everyone! Great to split water, Ashu! Chester and Preston, it was awesome to finally meet you guys in person!