The one positive aspect of 2020 for me has been the opportunity to fish with good friends.

That’s why when good friends Rob and Carter expressed an interest in fishing, I immediately obliged. Carter goes to school on the other side of the country, and as such we don’t get to see him often. For Rob and me, this trip was less about fishing and more about reconnecting with a good friend.

For convenience sake, we made a trip to the Cocheco rather than one of the popular tailwaters. With the substantial snowstorm last week, I expected the river to be largely frozen over but I was pleasantly surprised to see plenty of fishable water. We started at a fairly popular run, where surprisingly we were the only ones.

Overall, it was a low volume outing. We landed some small rainbows and missed a few more. Takes were incredibly subtle in the cold water and frozen guides made fishing a chore. Persistence won the day, more so than ever.

We moved around a fair bit and even ran into another friend of mine, Greg. Greg was one of my students back in the teaching days at UNH. He is a terrific angler and even guides part time in western Mass. He grew up in the area and as such, knows the river like the back of his hand. At one spot, I saw him expertly pull out three fish in a row within five minutes. He graciously allowed me to fish below him, whereupon I landed another rainbow as a snow squall rolled in.

With that, we decided to call it. All said and done, it was refreshing being able to fish with good friends, old and new. The fish, you could say was the icing on cake. 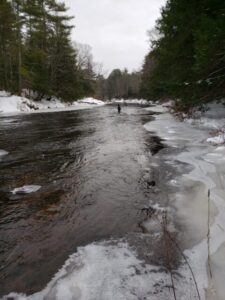 2 thoughts on “A Snowy Outing”

Psyched to test-drive these flies with @fieldbiojo

Tough day, at least for me. Found this chunky stoc