With the next day’s projected temps starting in the 20s and not expected to go above freezing, Alex Bagdonas (good friend, near-neighbor and a blog team alumnus) and I debated if and where we should fish.

He and I decided to go for it and to fish “closer” to home. An overnight cold snap usually portends sluggish fish, and we wanted a better return on our gas mileage.

I fished my all-mono Euro rig, which minimizes icing. I’m not a huge fan of bobbers (and the indicator game is my weakest skill-set) and have been throwing dries and articulated streamers quite a bit this winter. So, the Euro approach seemed like a good way to mix things up.

I tied up some new Euro jig streamers, and Alex and I met up early and drove in separate cars to the river. Alex’s friend Brian Kelly joined us, and our convivial band split water and hit various spots.

It could be angler error, but the winter Euro jig streamer game again didn’t do much for me. So, I switched to “floating the sighter” with tiny flies from the bank. With so much pandemic-induced angling pressure, I’ve found that stealth has been critical since last summer.

For some random reason, at one favorite seam, I set the hook. Atop some slow, bubbly water, the sighter didn’t pause but something just looked off. I was then tight to a good fish.

Good luck led to a nice brown that taped at 17″. Just like last weekend, the winning combo was a size 18 very plain nymph and a size 20 soft hackle.

And for the rest of the day: nothing. That’s never ideal, but my goal in the winter is to have just one good take. I think it’s good to have low expectations.

The winning technique was throwing indicators at long distances to maintain stealth, which Alex did. He had a number of fish in the net, including a stunning 19″ buck brown.

Alex has a very clever indicator rig that gives him tremendous reach to hit choice seams without spooking fish. I’ll let him divulge the details if and when he wants and on his terms. As I’ve written before, he is the best indicator-nymph angler I’ve ever met.

For lunch, we grabbed some hot sandwiches. Alex treated us to a round of Fireball Cinnamon Whiskey (my first) which went down hot and easy. And, we had some good laughs.

Later on, we crossed paths with blog team member Damon Matus. I had not seen him in forever, and we spent an hour at the bank getting caught up.

The wind increased, conditions seemed colder but we kept fishing until dusk. Brian tightlined and had some good fish in the net, and we all were feeling very fortunate to see trout and have fun. It was a quiet day on the river. The sane anglers stayed home, clearly.

It wasn’t an easy day, given the cold and wind. But it was a good day. It was a great way, frankly, to forget the troubles of the day and the issues engulfing our nation. This blog has led to so many lasting friendships, and I’m grateful for it and for all of you.

During another slow moment of fishing, I told Alex: “I’m just here for the company.”

I’m glad we decided to fish. 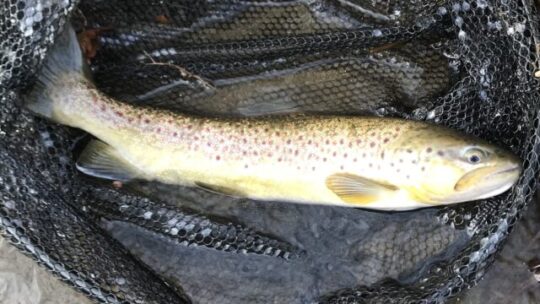