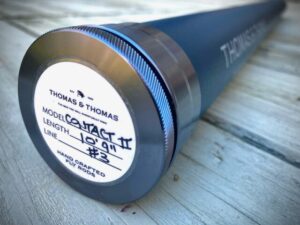 European style nymphing rods have come a long way in the last five years. Manufacturers are keeping up with the sport by creating rods that cover a wider range of presentations with the ability to fish lighter nymphs at greater distances.

Thomas and Thomas remains a solid leader in this corner with a redesign of their popular and successful Contact series.

I’ll admit upfront that I’m partial to the T&T brand; it’s hard not to root for the home team. I like the idea that the rods are built a little more than an hour north of my home, and I’ve spent hundreds of hours on the water with one of the original Contact series rods (the 11’3″ model).  I reviewed that rod on this blog and it was a game changer for me then. So, my bias disclosed,  I now offer an honest assessment from the perspective of a regular guy who fishes regularly.

A few years ago, I began casually looking for a “crossover” rod, something that would allow me to tightline nymph and cast a dry fly reasonably well. Admittedly, you can do that with almost any trout rod, but I wanted something more purpose-built and something in the 10 foot range.  After talking with Grady Allen at UpCountry Sportfishing in New Hartford, CT, I had my eye on the T&T Contact 1003, released last year as part of the “Contact” line, but built on a new blank – the same blank that now makes up the “Contact II” line.

When my good friend and fishing partner broke his nymph rod early this spring, the reality of being without it for a few months spurred a discussion about potential “back-up” rods.  I suggested the Contact 1003 and a call to Grady made sure two of them were set aside for us.

Due to the pandemic, we bought them sight unseen and without so much as a test jiggle at the rod rack – the T&T reputation was enough.  We hit the water with the new 10 footers and compared notes.
Contact/Contact II 10′ Three-Weight (1003) Initial Impression:

The 1003 felt comfortably light in the hand and with an up-locking reel seat, it balanced in the fore grip with a Hatch 4 plus reel (6.6 oz. with line and backing). As a rod builder myself, I scrutinize guide wraps and epoxy finish a bit more than most anglers. The new rod looked good with top of the line cork, REC components, and tasteful, brown/olive thread wraps.

The handwriting on the blank adds a bit of imperfect character that I appreciate. In fact, aesthetics was one reason I chose the T&T over competing rods from Sage and Orvis – the choice of components, thread color, and finish are of the sort that I would choose if building a rod myself.

More importantly, however, the action was crisp with a fast recovery. Less reverberation in the rod tip means a smoother and faster transition to a good drift because with good contact, those rod movements are transmitted to the fly.

Being so accustomed to the 11’3″ rod, the 1004 felt short at first, but the shorter length didn’t keep me from reaching most of my target drifts, especially with a light leader. Landing fish was considerably easier for me with the 10′ rod, as I often found extended lengths to be more of a liability in that department.

One day, I spooled up a three-weight floating line to see how well the 1003 would cast. My expectation was for adequate performance, but I was blown away at how well it cast, particularly in the mid range where most of my fishing occurs.

The summary of the initial impression: the rod was a joy to fish, it checked all of the blocks as a crossover rod, but didn’t quite replace my original 11’3″ Contact – the longer rod had its time and place.

Nevertheless, I suspected that I would choose the 1003 first on most days and as spring gave way to summer, that turned out to be true.

By July, my original Contact 1133 began to accumulate a thin layer of dust.  So I decided to sell it and put the money toward a 10’9″ Contact II when the first batch arrived at UpCountry, just in time for Independence Day.

By the way, the guys there are a wealth of knowledge on all of the T&T Contact rods and shop manager Torrey Collins is a T&T Ambassador. Give them a call, or if you’re fishing the Farmington, a visit to the shop is definitely time well spent.
Contact II 10’9″ Three-Weight (1093) Initial Impression:

Much like the 1003, the 1093 felt light, especially for the length (3.10 oz.) and also had a nice, quick recovery. I have to admit I’m not a fan of down-locking reel seats although they’ve become very popular on European nymphing rods.

I never had a balance issue with the up-locking seats and I like a fighting butt with a little bit of rod length behind the reel; it protects the reel when the rod is propped up on the ground and just looks better to me.

The Contact II series has an up-locking seat available as an option, which I would probably choose if I bought another one.  I also prefer the older reel seat to the matte black version used on the Contact II; the black may be more stealthy, but honestly, if my reel seat is what spooks the fish, then it just wasn’t meant to be.

The guide spacing was redesigned on the Contact II line with a low-rider stripping guide moved closer to the reel in order to avoid line sag which is ultimately transmitted to your flies as drag.  Micro-thin leaders can be a challenge to cast, but the rod handled a 20 to 22 ft. micro leader (six to eight lb. mono tapered to a rod length of 6x tippet) very well.

If you’re not careful, these leaders can easily get fouled on the tip guides, but I found the rod to be very forgiving. With the light leader, I fished farther away with this 10’9″ rod than I was able to with the longer 11’3″ contact. The 1093 also performed beautifully as an overhead dry fly rod and I used it often this summer, especially for delicate presentations with a long (20ft) tapered dry fly leader and a weight-forward floating line. The action of these rods offer superior protection for light tippet.

The summary of my initial impression: the 1093 satisfied my desire for a longer rod while still checking the crossover block with excellent dry fly performance.
Six-Month Impression:

So, after a summer and fall on the water, I remain impressed and satisfied with both the 1003 and 1093.  Versatility is perhaps their greatest attribute.

Case in point, I would frequently begin an outing by tightline nymphing and then with a change of spools, rig up a three-weight floating line to fish single dry fly or a dry and dropper.  Sometimes I would tightline nymph my way upstream and then work back down with a brace of wet flies or a streamer.

I fished “micro” European nymphing leaders much of the time on both the 1003 and 1093, and both rods handled them very well.  You can take almost any rod and Czech nymph a heavy anchor fly but fishing a single, 2.5mm tungsten beaded nymph at long range is a different story and in my opinion, that’s where these rods really shine.  They have the sensitivity you would expect from top-tier nymph rods.

In fact, after landing a fish I often struggle to recall whether I detected the take by sight or feel, a testament not to my foggy memory but to the fact that, properly configured, these rods facilitate a sort of sixth sense of strike detection.

It’s difficult to rate one over the other in terms of overall versatility; perhaps the 1093 gets a slight edge for the added reach but there are many situations where I appreciate the shorter 10 foot length, especially in tight quarters. So far, they both remain free of dust in my quiver.

These are definitely premium rods and the price tag reflects that, but when you factor in the quality of the components and the tremendous versatility, they’re a really good value. If you’re an experienced angler looking to upgrade, or you’re looking for your first European nymphing rod and want one of the best available, a Contact II might become your new favorite. If you’re fortunate enough to have a local fly shop that carries them, please consider giving them your business.

18 thoughts on “Gear Review: The Thomas and Thomas Contact II”