“Dawn patrol” is an apt phrase from fellow blogger David Hyde for when we go out for stripers in the wee hours. He’s been a generous mentor as I try to figure out the salt.

But, Saturday was an opportunity for me to chase salmonids in the sweet water, when I pursued my typical summer schedule: up at 2:30 am to be on the water by civil twilight. It ended up being a tale of two outings, as the day’s first half and second half were entirely different.

I’d say that the fish are entirely jaded at this point, with flows moderate, water clear, and the sun pretty high. Seeing no surface activity or bugs in the morning, I tightlined a number of spots and ran into a pile of ‘bows. The one below was particularly strong and colored-up beautifully. It was in prime position in a prime lie, which made me wonder if the browns were hanging back or had the better DNA to be more choosy.

My new Thomas and Thomas Contact II 1123 continued to perform ably. As Damon Matus has written here, it is an amazing rod. I did a gear review of the Contact I here after it became my favorite fly rod. But the Contact II is now the number one arrow in my quiver. It’s hard to explain, but the rod casts beautifully and it deftly lands fish. The rod is a bit stiffer than the Contact I but it still has plenty of give to protect light tippet when a decent fish is on and is light enough to detect soft takes. Folks, the rumor mill is true: this is the best Euronymphing rod on the market.

At one point, I had a good-sized brown on and decided to put the Contact II to work for fun and giggles. I tightened up and made the rod’s butt end do the heavy lifting. Unfortunately, my 6x fluorocarbon snapped at the last minute, but I was really amazed at how strong the Contact II was. (One lesson learned: when fish are languid, a “shock and awe” offering with a small streamer really got some browns going.)

I switched spots and found some amazing fish on size 16 Sulphur emergers, which was surprising as that hatch supposedly is over. It made me wonder if fish were still looking for some yellow bugs. I was two-for-three with dries, and this clean-looking one was the best of the lot. Catching a pile of stockies is fun, but I’d trade all of them for a few browns on dries any day. 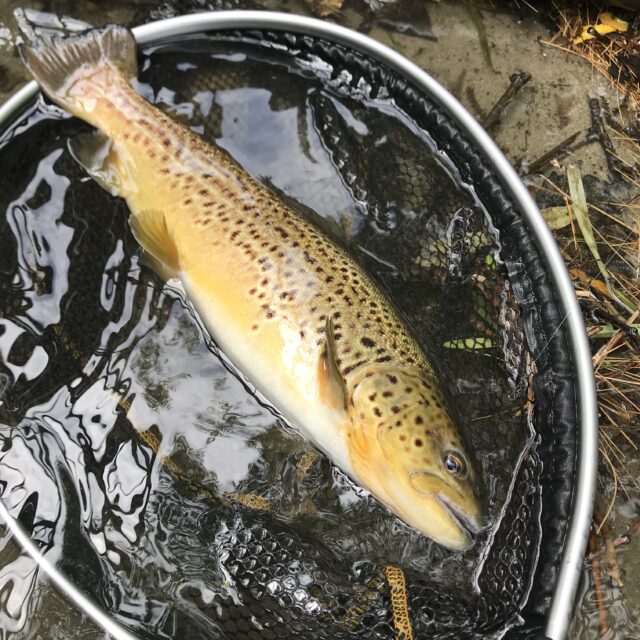 I spent the latter half of my outing focused on dries-or-die. Admittedly, it’s not the best use of time. You sit on the bank and wait for an evening hatch that didn’t really happen on Saturday. The good news is that I split water with a very kind and very experienced dry-fly angler. He landed a few, and the rest of us were blanked. A part of me was jealous, of course, but when you meet someone who has fished a river for decades, you realize that you have years of fun and learning ahead of you. And, somehow, that made me feel better. I love fish and I love learning. Fly fishing stole my heart years ago.

After 14 hours of fishing, I decided to call it quits. It’s a schedule to which even the great Ashu Rao might give a hat tip. Awake at 2:30 am and home at 10 pm, it was definitely a full day. But when you want to fish, nay, need to fish after a funeral in the family, an insane work schedule, and a household that used to be full with children and is much less so now with most in college or beyond, you get the sense that time is fleeting and you must fish while you’re still physically able.

I hope everyone is having a good summer.