There’s a particular slowness to nature at this time of year, where the energy of early summer gives way to the lethargic doldrums of the eighth and ninth months.

It’s been a particularly hot summer in New England, and it may not be prudent to fish some of our waters until a break in the weather brings those cooling temperatures that signal the approach of autumn. But where water temperatures are still safe for trout, there’s plenty of opportunity mixed in with the challenge of low flows and the predominance of micro bugs.

I’m not much of a small fly angler. I don’t even own a spool of 8x tippet. For that matter, a spool of 7x lasts a long time in my inventory. Nevertheless, I admire the skill associated with technical dry fly fishing and those anglers who do it well. For me, small flies are size 20-22, and I do have a few Trico and Needhami imitations down to about a size 26 in my tiny stuff box just in case. But they’re not the subject of this post.

That said, I like to take advantage of the lower flows by fishing water otherwise inaccessible, or by prospecting with dry flies. Now is a great time to get out and explore, and blind-fishing a caddis is a great way to move some very respectable fish if you’re willing to hunt them out, not unlike the concept of covering water with a streamer.

This is how I’ve spent a lot of my time on the water this summer and what I would recommend to anyone looking to beat the doldrums.

Equipment: My focus in this post is more about technique than equipment, but I’ll mention what I’m using for frame of reference. I fish one rod and alternate between a dry line and a level taper nymph line by swapping reels. I fish a 10′ to 11′ European nymphing rod, which performs just as well with an overhead dry fly as it does with tightline nymphing and allows me a degree of versatility I wouldn’t get with my 8’6″ five weight.

Recon by Caddis:  There’s a military tactic known as “recon by fire” whereby “fires” (from a machine gun, tank, rocket, etc.) are directed at likely holding areas in an effort to flush out an enemy.  Now, trout aren’t the “enemy” and we could all use a bit less Rambo in our personae but, similarly, I like to cover water with a bushy Caddis in the hope of triggering a predatory strike. I may only move the fish, but he’s given up his location.

I target water that would be occupied by active fish, so I’m looking for shallower or faster moving water versus a deeper, slower run or pool. That said, I put the fly practically everywhere as I move about. If I can fish from a distance, I’ll use a dry line and a fairly long leader of around 12′ to 20′ feet (shorter if adding a dropper nymph, longer if fishing a single dry fly) because it enables a more delicate presentation.

If fishing from a distance isn’t practical due to conflicting surface currents, such as in pocket water, I’ll fish the dry fly on a European-nymphing rig.

I don’t limit myself to Caddis, either; sometimes I’ll use a large Isonychia or a terrestrial, but in the absence of obvious hatch activity, the Caddis is a good starter.  I like to have patterns that ride low in the film as well as some high riding, hackled versions that I can skitter and twitch. Hotspot attractors also get worked into the rotation.

Variations of two patterns that get a lot of use from me lately are Kelly Galloup’s North Branch Caddis and Devin Olsen’s Front End Loader Caddis. 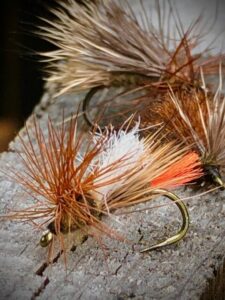 Dry Dropper: I fish dropper nymphs often, mostly size 18to 22 this time of year in a variety of weights. Water types and fish activity determine which line I fish. The versatility of the Euro rig shines in mixed water types (pocket water, for example), because of the control I can maintain at close range by keeping line and leader off of the water and also because I can quickly revert to nymphing by clipping off the dry.

But for single dries or very lightweight droppers on a Euro rig, I’ve found the key is to use a leader with a heavy enough butt section and/or running line with enough mass to cast the dry fly. The thinner formulas don’t handle this task very well. Instead, they rely more on the weight of the nymph to carry the dry dropper rig to the target. Mono rigs using a 20 pound butt section provide a good baseline of versatility because they can be cast reasonably well. The thinner you go from there, the more difficulty you’ll encounter in casting a dry fly.

For a good starting point, consider this Modular Euro Nymphing Leader. I use a level-taper, purpose-built Euro fly line because I prefer its feel in the hand over mono, and it has enough mass to cast a single dry fly. Still, I find a haul on the forward cast really makes a big difference because the rod doesn’t load like it does with a tapered fly line.

The Path Less Traveled: Lower flows make some areas accessible that would otherwise be out of reach for the wading angler. If you have the time to explore some of them, you might encounter some less-pressured fish that don’t know that they’re only supposed to eat tiny flies in August.

However you choose to fish, carry a stream thermometer and call it quits when the mercury approaches 70 degrees. If you can keep your fish wet and forgo the glamour shots, even better. There will always be reasons not to fish, so take advantage of your opportunities and enjoy your time on the water.