Here is another humorous guest post from Bill Hager.

It was the first time I had ever been in a morgue. It was a shock to see my fly fishing buddy stretched out on the table, awaiting identification by a friend or relative. 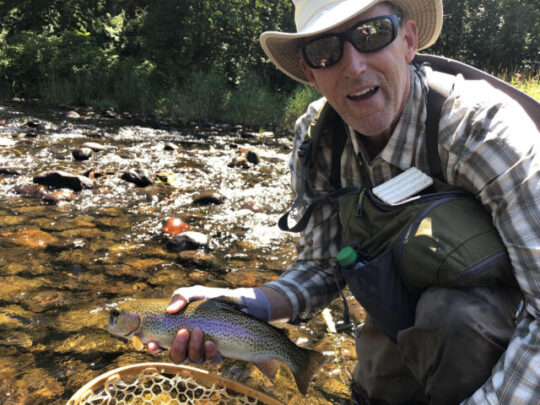 “I didn’t know that a 50-year-old man could die of Sudden Infant Death Syndrome.”

“No, I meant ‘Strike InDicator Surprise.’  You see it in a lot of fly fishermen.  Technically, I guess it’s just a heart attack.  Scares fisherman to death when they are waiting for the strike indicator to go under and a trout busts it out of the water.  I think trout hit those things for the laughs,” the coroner said. “They like to see fishermen jump. There’s no other rational explanation for it.  SIDS is another reason to give up the bobber and start Euronymphing,”

“Oh, those are where he tripped over the wading stick he carries to keep him from falling.”

“I see,” the coroner said slowly.  “And this piercing of his nasal septum?”

“A windy day is to a fly fisherman what a crossed-eyed javelin thrower is to a crowd of spectators.”

“Hmm….,” the doctor murmured. “I took an x-ray of Doover and saw a hook in his small intestine.  Any ideas?”

“When we went fishing yesterday, Doover was exchanging his dry dropper pattern for another one.  He put a size 20 Zebra Midge in his mouth and a size 14 Adams between his lips while he was removing his previous setup.  When he got ready to add the midge as a dropper, he couldn’t find it.  Must have slipped down the gullet.  The cheapskate would be happy to know that he didn’t drop a $2 fly in the river.  I don’t know….  Maybe it was a bad time for me to ask him what he was putting on.  I couldn’t make out what he was saying the first three times I asked because he was mumbling so badly.”

Then, I thought of something. “Hey, Doc.  Before you bag him up could I see his personal effects?”

“I don’t suppose it could hurt.  All his gear is in this canvas bag,” the coroner responded. “I think there might be something alive in the little round can.”

“Dang it!  I knew it, I knew it!  He’s been tipping his wooly buggers with meal worms!  That low-down, bottom-dwelling, bait-chunker!  I suspected him of this ever since that day in June when I saw a large booger crawling across his cheek.”

“Looks like maggots will have the last laugh with Doover,” the coroner darkly joked.

“He must have been afraid of that because he wants to be cremated and have his ashes spread over our honey hole, “ I said.  “I’m the only one who knows where it is so I guess it will be up to me to release ol’ Doover’s ashes there.   It’s weird to think that there might be a little bit of Doover in every fish I catch there.  One thing is for certain. I won’t be eating any of them. That’s just like Doover to ruin my favorite fishing spot.”

“But the truth is, I’m going to miss ol’ Doover,” I said. “A good fishing buddy is harder to find than a banana in a guide boat.  I’ll always remember him for….”

“Wake up!  Wake up!” Doover said as he was kicking my wading boot.  “You must have fallen asleep against this tree while I was finishing up at the honey hole.  I caught four nice browns.  They started biting Woolly Buggers as soon as you left.”

2 thoughts on “Death of a Fisherman”