Fellow blogger Ashu Rao had good advice. He said that we should fish on Sunday with low expectations. The water was low, temps were due to climb to 90 °F, and the trout had been pounded.

We met up early in the morning with the hopes that we could intersect with Tricos, that interminably tiny bug which is the object of many curses and invective.

River traffic was light, as the sane people stayed home. The hatch ended up being also light. There was a decent spinner fall. We caught fish, but had to work like dogs for them.

I’m used to Trico spinner falls during which trout rise ready and steadily. That wasn’t the case on Sunday. Maybe, the fish were that wary after being beaten up during a summer that some think has produced record-breaking pressure. All I know is that it was another hard-work fishing outing for me.

I was grateful to be on the board early. This brown fell victim to a spinner. 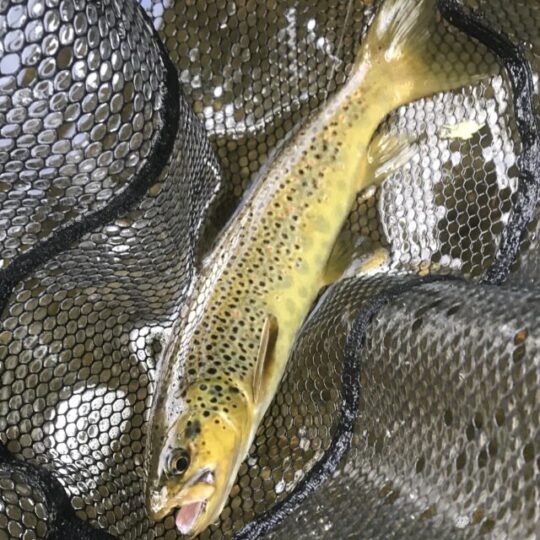 Later, I was chatting with Ashu as we fished some flat water. I saw some gentle rises and thought the pod comprised of smallish fish. I swapped out my #4 and went for the #000, as the pod was in range. And, I was surprised as anything to see a small take.

It ended up being the fish of the day for me: a decent-sized brown that took a size 28 Trico spinner (thanks for the heads-up, Mike Vito!). It gave my #000 a good work out, and I was pumped that the 8x tippet held. It was, maybe, 14″?

In the afternoon, Ashu and I decided to tightline. The sun was high, and the fish were hunkered down.

I had good luck with the Euro Dry-Dropper approach and ran into a good number of fish at a riffle. Then, for fun, I put on a Mop fly, employed a George Daniel technique (I’ll write about it one day), had a gentle take, and a big brown jumped into the white water and took off.

I got it within my net’s range and saw that it was enormous and had a big kype to boot. Unfortunately, it saw me and surged again. After some more rod angles and getting it closer and closer, the brown sadly popped off. But, I now know where it feeds when water is low. I’ll be back, Mr. Brown.

And, that was that. After 10 hours of fishing, we called it. Half of my fish were on dries, and the other half were from tightlining. The former took up 70% of my day.

All in, it was a great day. Ashu and I were each hoping to land just one fish on Tricos, and we did much better than that. We both agreed that we’re ready for fall, however: cool weather, more eager trout, and some beautiful fall foliage.

I hope everyone is hanging in there. We’ve still got miles to go with this pandemic. Let’s hope for a manageable autumn….

3 thoughts on “Ready for Fall”