Temps are staying hot, and pressure on tailwaters is intense in New England right now. Local waters are being hammered because that’s what we can get to with quarantine travel restrictions.

But for those in the area or that meet travel guidelines (at time of press), I have an alternative to beat the crowds and catch some tanks in a river that stays cool enough (in sections) to keep fish safe for play: Otter Creek.

LOCATION
Located in south-central Vermont near Danby, the Otter Creek Trophy section is stocked with 500 each of two-year-old rainbow and brown trout annually. There is plenty of wild brook trout and holdovers from past seasons growing to hog-like proportions.

Much of the trophy section is in the  Otter Creek Wildlife Management Area. It can be reached by foot, but I highly recommend a kayak approach. But be warned: put in and take outs are not well developed and a bit of a hike/climb with a kayak in hand may be needed.

However that can mean is what I experienced on a prime summertime Sunday, when many other rivers are elbow-to-elbow with anglers:, I only saw myself and my friend (at a socially-distant six feet apart, of course) the whole day on the river after put in.

Much of the river after the put in is low gradient, with big bends and deep pools. But, even with some coldwater tributaries and springs and big deep pools, do take care to maintain an eye on the water temp. Not all parts of the river are made equally, so some sections can get dangerously warm.

TACTICS
Morning and evening will still get you the best fishing, but since you will be floating through some big deep pools through midday, some varied flies are suggested. Although small stuff may come off here and there, this isn’t a tailwater. So, big terrestrials and fat junk fly droppers will serve your purpose to get big fish moving for what they think is a calorie-dense meal.

However, to cover the most water, I suggest going with weighted streamers on a floating line to dredge the depths of the pools you will come across. With a heavy streamer and a long enough leader, you can get really deep if you need. With a six- or seven-foot leader and a lightly weighted streamer with a floating line, you can get a bit of a jigging action that can really be strike-inducing.

But be warned. Back-cast space is often limited, and there are plenty of trees to steal your $12 articulated monsters. I suggest simpler single-hook minnow imitations and to bring plenty of them (and tippet). Patterns are open to suggestion, but I had good luck on Conehead Bunny Muddlers, Moto’s Minnows, and Zonkers.

When it’s brighter out, I generally use lighter-colored flies. I didn’t fish anything bigger than four inches long, but at the wee hours, bigger patterns might be better.

Consider this option, though, for fish moving slower: take a hopper or Chernobyl Ant (any terrestrial with lots of foam; heck, even a mouse) and put a dropper on it about 18 to 24 inches long with a two-inch baitfish imitation on it. Use something with fur or lots of marabou so that even small movements make it lifelike. And, never leave home without a couple of beadhead Woolly Buggers.

Also, consider bringing a spare rod, such as a spin rod if you get fed up with unhooking flies from branches from both above and below a river.  I ran into a couple situations where I was lucky that the rod stayed in the branch it got caught in, instead of dropping to the depths after being pulled out of my hands as the current took me down river. 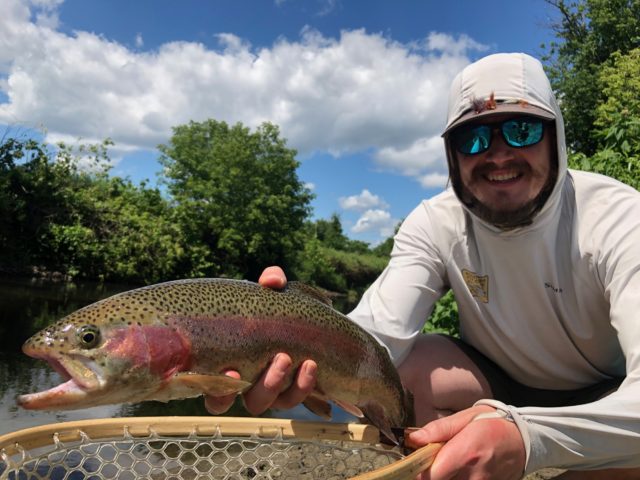 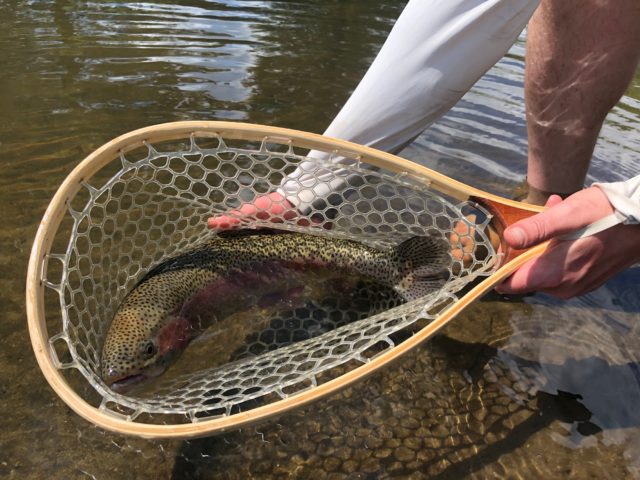 Well, I did all right. I got two beautiful 17″+ bows. I bet the bigger of the two was over 18″, but I have been known to overestimate when measure tape isn’t in hand…. Both were caught on slow-motion retrieves with small baitfish imitations.  I also caught a nice wild brookie or two and some big chubs on smaller minnow imitations, too. Not a bad day at all.

But be warned, if you decide to float one way and have a take-out down river, as in the lower sections there were parts that were difficult to get through. The lower part of Otter Creek was almost a hike as much as a float because of the gradient; and, depending on the water level, you may not be able to get through except by dragging your kayak through some nasty downed trees.

This float trip isn’t for the faint of heart and weak of back. It’s not the worst thing in the world either, but plan for a full day and take a necessary kit and water. And, above all else, please respect state travel guidelines and keep everyone safe. 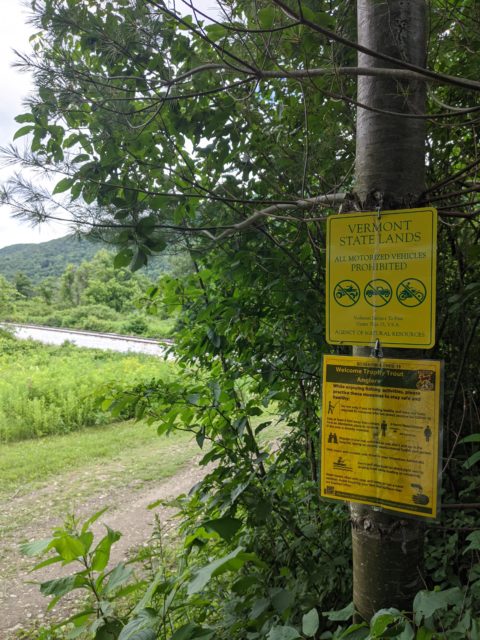