It was a pretty chill outing at the Farmington yesterday. There have been fewer anglers, bugs, rises, and landed trout with each passing week. And, yesterday, that trend continued.

I threw wets (again) to test some new flies and saw a modest volume of fish. I think we’re in the fall “shoulder season,” as most big bug hatches are over and there aren’t yet eggs in the drift. The best fish were a decent brookie and a double of browns.

Friend of the Blog, Damon Matus, saw my parked car and texted me. He and I grabbed lunch with UpCountry’s Torrey Collins, which was fun and educational, as always. Torrey had a lot of insights on techniques and flies. I really think he should write a book! 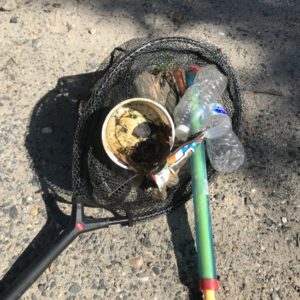 Damon and I fished in the afternoon, worked hard and had a few fish apiece. I saw a bunch of trash and decided to do a good deed. I collected a full net of detritus.

It was still a good day. There’s nothing like being on the water and connecting with friends.

My two cents, and feel free to ignore. If you’re going to head out, make sure you have flies “with a twist.” The fish have seen everything at this point. The flies that worked today all had a slight wrinkle: a stonefly with tinsel, a midge with a tuft of Glamour Madeira, and a spider with red thread.

3 thoughts on “Flies with a Twist”