It was a marathon fishing trip!

Details: 10+ hours of fishing per day, PB&Js for lunch, and oodles of fish on dries and wets. Also: friends, laughs and much gratitude.

A multi-day fishing trip was in order, given that my work slows down during holidays like July 4th, and my family was out of town for college visits.

With temps rising and water flows approaching normalcy, I focused on two tailwaters: the Deerfield and the Farmington. I don’t like to target freestones when water is above 70 °F, and trout are gasping for oxygen. My personal preference.

The Deerfield was its usual beautiful and mysterious self. I found plenty of open water and hit both familiar and new spots. Whether it was timing or random luck, stretches would get active and then inexplicably die down. One spot would produce like mad one day but be dormant the next, even at identical flows. But, that was all fine because there must be something in the water: the fish were incredible fighters.

I threw dries a majority of the time, as I targeted the low-flow periods to avoid the rafts and tubes.  It was great to target fish up top with my #000.

The trout were extremely picky. For me, the best patterns were midge emergers that sat low in the surface film and are featured in Ed Engle’s Tying Small Flies. Full midge dries didn’t work. Caddis and mayfly patterns failed. And, only flies size 20 or smaller produced. Oh, and the fish wanted only patterns that featured shucks or incorporated CDC fibers.

So, yes, they were picky.

Such small flies called for 7x tippet, as 6x generated few hits and 8x led to many takes but break offs. And, I had to get used again to slowing down my hook sets to make sure a fish closed its mouth fully around a fly.

It all paid off, though, as I landed quite a few trout, including my first-ever wild Deerfield brown (many thanks to Mike Vito and Grant Figura for their suggestions)!

The best fish for me was a good-sized brown, which I think was a holdover from 2017 or earlier. The dorsal fin was bent, meaning it had been stocked, but it had an intact adipose fin (per Adam Kautza, MassWildlife started in 2018 to stock Deerfield browns that have had its adipose fins clipped off). It was an excellent fish that jumped a few times, making for a thrilling fight. It looked stunning, too.

I stayed at an AirBNB in North Adams, all the while thinking of that amazing brown before blissfully falling asleep.

At the Farmington, normal flows and bug activity meant that I finally could throw wets, dries and dry-droppers. I love tightline nymphing, and it is deadly. But, it certainly was nice to mix things up.

The H2 #4 did a great job of swinging wets. The #000 was the dry-fly rod of choice for stalking fish at shallow areas. The ultralight fly line, I’m convinced, helped greatly with stealth.

You see, I was running low on small dries. During a phenomenal 12-hour session the prior day with Alex Bagdonas and his spouse, Mikaela, I again found that small flies produced like crazy, so much so that I was running low on inventory. And, there’s nothing worse than not having the right-sized flies when fish are rising.

But, after such a long day, I was too tired to break out the vise. And, after a huge dinner at Bamboo, a comfortable bed at Legends beckoned (I don’t know how Sal does it, but his beds are among the most plush I’ve ever experienced). So, I awoke early the next day to tie flies, get breakfast and hit the Farmington before dawn.

I threw dries for most of the day, and my most rewarding fish of the entire trip appeared. It took three hours of sitting along the bank, waiting for rises and casting with stealth, but I managed to dupe a nice brown. There was a midge hatch, and dries and dry-droppers didn’t work. I saw some bulges but very few outright rises. So, I assumed fish were feeding just below the surface.

I threw a midge soft hackle, counted a few seconds and did a gentle blind hook set before casting again. I worked seams that I knew held fish. Soon, I felt a bump, and a fish bolted for fast water. Side pressure did the trick, and a nice 14″ brown then said hello. 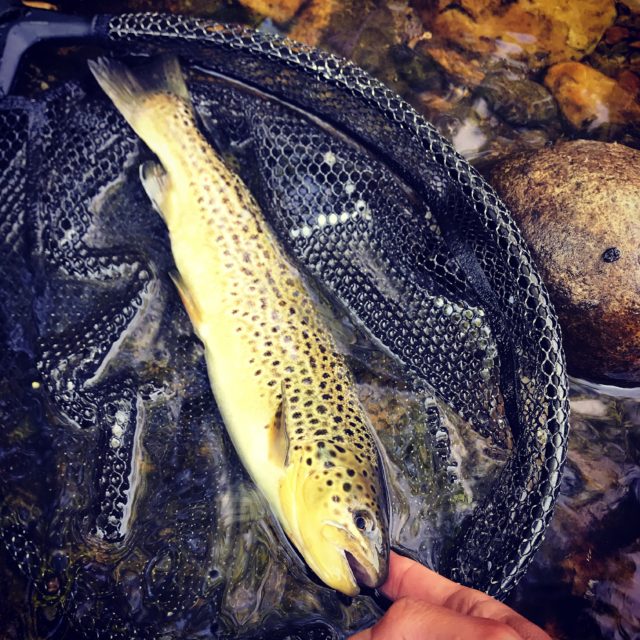 So, all was well. But, I had a few hours left to fish before driving home and wasn’t going to leave that time on the table. It was time to keep fishing.

In the afternoon, I stumbled upon a wet-fly paradise. I found a shaded run and fished a calm tail out. I didn’t think there would be fish there and was killing time as I waited for another angler to move on from the head of the run. I decided to practice my wet-fly techniques amid the placid water. And, lo and behold, that calm tail-out that looked devoid of life was loaded with fish.

It was fun to experiment with different depths and swing rates.  It was enjoyable to find underwater structure and swing flies up, or across, just upstream of it. I found that visualizing the flies’ drift really helped.

To conclude my trip, I sat down on a rock and just tried to absorb it all: the water, the greenery, the trout, my fly-fishing friends, and my gratitude for all of it. I actually said a prayer of thanksgiving, as it had been such an incredible trip, one filled with wonder and grace.

Honestly, the highlight of it all was the chance to fish with Alex and Mikaela. They’re great folks, sincere and a lot of fun.

Another wonderful trip in the bag!

8 thoughts on “A Deerfield and Farmington Trip”