I am learning that stealth matters.

I’ve been experimenting at the Farmington permanent TMA, far away from the newly-stocked areas, and have been visiting the same few stretches to see where the fish are and what they’re willing to take at different flows.

With water still high, I’m finding that fish are close to the bank, less than a rod’s length away, at areas that look “too shallow.”

When I got to one stretch during my last outing, I was second in line, as another angler was already there. He was standing right in the spot where I usually find fish.

So, I stayed quite a distance away and started throwing streamers for fun and to mark time. After a while, he ambled off, and I walked over.

I stayed on the bank and started casting, thinking that the fish would predictably take the usual flies and that I’d take a few photos and move on.

I actually worked that area for hours. Call it a combination of pride, determination and curiosity. Even more puzzling was that bugs were popping everywhere: Midges, Caddis, BWOs, and Hendricksons. Trout just had to be there. I switched flies over and over and tried different techniques over and over. 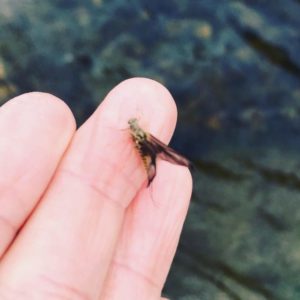 Then, I thought of the Twenty-Minute Rule. @canalflyguy had told me about this. When another angler has walked away from a honey hole, he gives it 20 minutes. He rests the area. He then approaches the water with a low profile and starts to fish while staying on the bank. He casts while kneeling. In other words, stealth.

I walked downstream of the money stretch to throw streamers and rest the run. Then I walked back up, hunched down and slowly crept towards the water, and knelt down. I now was below the fish and started to work a soft slick about three feet from the bank and well above me.

After one cast, I felt a gentle “thump” on my micro-thin Euronymphing leader (side note: with savvy fish, I usually feel the takes rather than see them; a big reason why “thin wins”) and significant weight. Right away, I knew this was a different fish. It just was stronger.

After a bit of a tussle, this clean-looking brown graced the net. 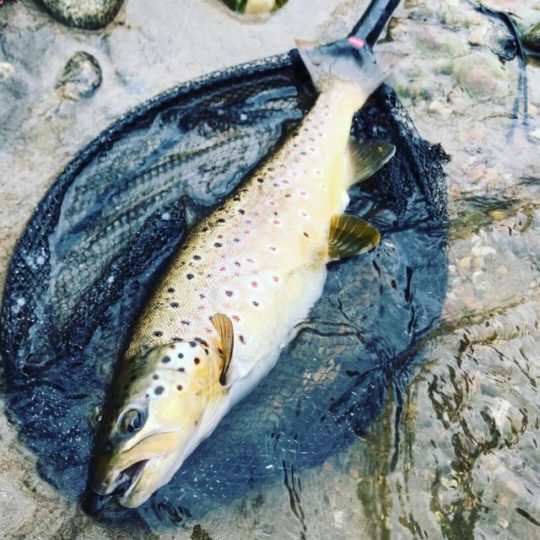 I particularly admired the red spots, intact adipose fin and the full gut. The brown taped at 17″ and had a nearly 10″ girth! It was a special fish, a glorious fish. It called for a celebratory apple fritter from DD.

In retrospect, my lesson learned was obvious: I should have embraced stealth.

While high, the water was clear. Fish were near the bank. I had walked in above the fish, standing upright, and they probably saw me right away.

Another angler had worked that area thoroughly before I got there, and so, fish had probably scattered, or in the very least, were on high alert.

So, stealth matters. Rest the run, enter below the fish, stay out of the water, and keep a low profile. It’s particularly important during high flows, when fish are near the bank. Yes, we’re fishing, but I think we’re hunting, too.

8 thoughts on “The Twenty-Minute Rule”