I woke up on Day 2 of my Farmington trip to reports of very high flows. 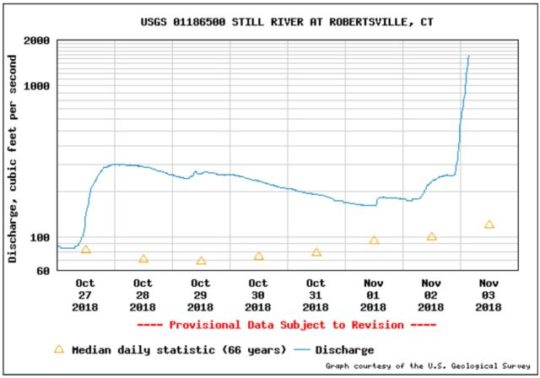 I’ve never fished the river at what ended up being 2,800 cfs. It was tempting to bail and head for the Swift River.

But, I was curious as to what I would find and headed out. I was already there, I figured, and it would be educational. I’ve caught plenty of fish. Why not learn something new?

I targeted the wider pools that feature quiet water at inside bends. The complication? There was almost no bank access. The water was up very high and submerged much of the tall grass along the shore. Take one or two steps into the river, and you could feel some strong current.

So, to reach spots, one option was to bushwhack through the foliage and risk puncturing your waders. I decided for the next option and stepped into the fast-moving water. It was a bit dangerous and not something I’d recommend. But, I poked along, hugging the shore.

The other complication was limited reach. The nice and slow slicks were very far away. And, five feet from shore, I already found myself in deep water.

I tightlined (poorly) and threw indicators (also poorly). I rotated flies and adjusted my tippet length. I saw a rise at a back eddy and blindly threw dries. I chucked streamers, too. I tried everything.

A third complication? Junk in the water. I don’t think I’ve ever seen so many leaves in the water, which meant that I had to remove leaves (or sticks) every few casts.

There also was flotsam of every kind shooting by: plastic bottles, wood planks, black and white Adidas sandals, a volleyball, and chunks of Styrofoam. One of the sandals floated around and around in a giant ellipse, catching a back eddy and then again getting pushed back out to the main current. It repeatedly floated by me, a reminder that we generate a ton of trash. All this meant that I had to time my casts to avoid debris.

I managed one take, but that fished popped off. I had on a very long tippet teamed with an indicator. It was very hard to compensate for slack, sense a take and set the hook at the right time.

Still, I kept at it, visiting various spots along the river. I have many weaknesses but persistence is not one of them. Unfortunately, one road was closed for a while due to a car accident, and so, I detoured around.

After a while, I headed north, above the Still River, hoping for some relief. Flows were lower but still very high. Leaves in the drift were still ubiquitous.

I fished a slick among some white water and managed an eat. I lowered the rod tip to ease the fish above me, but it was tough, given the fast current. Eventually, I got the fish across from me, I saw a trout, and the hook popped out.

Later, I targeted a deep run and landed one. Finally! 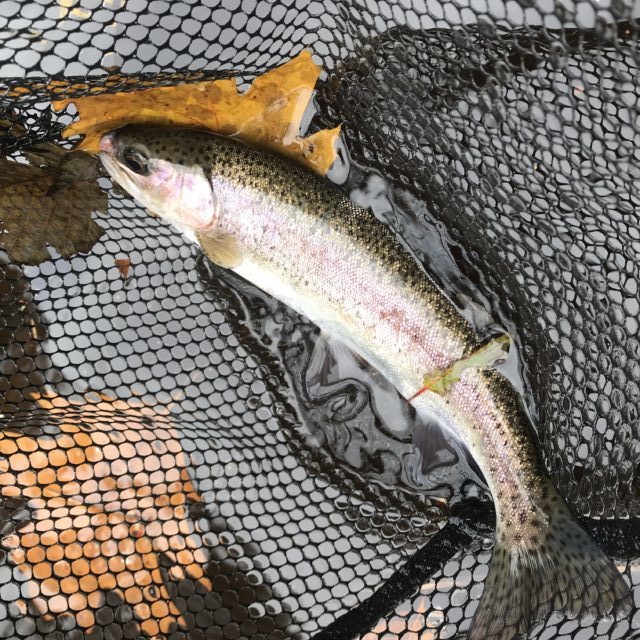 Around noon, a fourth complication arose. The wind really started to blow. The gusts were absolutely ridiculous. More leaves fell into the water, and that was when I decided to head home. I can still have a good outing if I’m facing two complications. Four are too much.

But, it was a great trip overall due to all of the interpersonal interactions. It was a productive day yesterday, along with a fun lunch with Torrey and Damon.

I stayed at a place via Airbnb, and I loved it. Link here. The room was huge, clean and beautiful. Karen and Dave were awesome hosts. Their house is right on the river, too.

I also enjoyed another dinner at Portobello’s and that let me catch up with Sue, who was tending bar. Since starting to fly fish regularly in 2014, that restaurant has been my go-to dinner place for my semi-annual overnight trips to the Farmington. It is nice to eat at a place where they remember your name and you remember theirs.