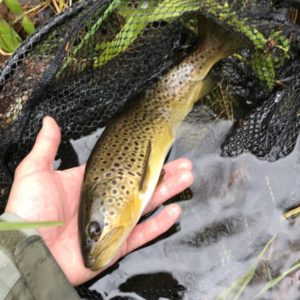 I took the micro-thin Euronymphing leader to the Farmington, and it did well.

I usually do an overnight fishing trip in October, but my work schedule had other ideas. So, I am doing one now in November and took a vacation day from work on Friday.

Thankfully, the forecasted lightning didn’t materialize, and the rain was not too bad. It was cloudy all day, which meant that conditions were good.

The brown trout have moved at one particular stretch. Where I usually catch good-sized browns instead produced small browns and decent rainbows, including this one that taped at 16″.

Later in the day, I fished with Damon Matus. We ran into browns that seemed to be in pre-spawning mode, moving to areas where they can find the right kind of gravel but where we didn’t see yet any obvious redds.

Over lunch, we chatted with Torrey Collins at the Better Half Bistro and talked all things fly fishing. 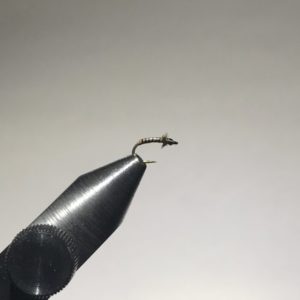 The best fly of the day were variants of size 20 larvae and pupae, ones that also do well for me at the Swift River. One such fly is a simple experimental fly about which I blogged here.

There is something special about small flies. I had worked a run with some larger flies after another angler had nymphed it. Nothing. I then switched to size 20 flies on a drop-shot set-up and soon landed two good fish. Trout can be so discerning!

The best fish of the day wasn’t the biggest, but was a clean-looking brown with red spots.

At dusk, Damon and I saw some rising fish and caught a few on dries.

It was a great day. The weather held, the fish were eager and offered a double-digit outing, and we closed out with dries.

We are getting a deluge of rain, and so, we’ll see what Day 2 of the trip brings.