I realized the other day that it’s been two years since I accepted a job offer and decided to move to Massachusetts. It wasn’t until May of that year that I actually moved here.

I had never been to Massachusetts or anywhere in New England, for that matter. I was a little hesitant about the move. I thought, “What’s the fishing going to be like? Will there be anywhere I can go hunting?”

Looking back on my (almost) two years here, I can honestly say that the fishing in New England has far exceeded my expectations. In my mind, I think the best word to describe the fishing here is “diversity”. No where else that I’ve lived has offered such a diversity of fishing and high-quality angling at that: coldwater, warmwater, and saltwater, an endless variety.

All this being said, as winter drags on and my potential fishing time is being spent doing other things, I’ve found myself daydreaming and feeling a little homesick. I figured it might be fun to write a bit about one of my favorite places to fish for trout (it’s not in New England): the Driftless region of southwestern WI.

It’s entirely overlooked but it’s an amazing area with super fishing. The streams are small- to medium-sized. The riparian landscape ranges from open grassland to hardwood forest. The streams are highly groundwater influenced, spring creeks, deep (often the smalller streams are deeper than they are wide) and mostly low-gradient.

There is far more water than can ever be fully explored. Even in multiple lifetimes. All within a two-ish hour radius. Access is plentiful, and pressure is surprisingly low on most streams. 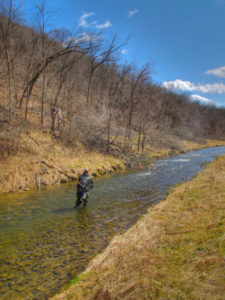 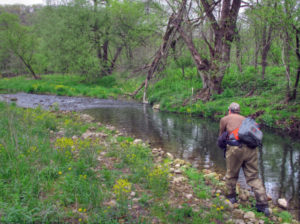 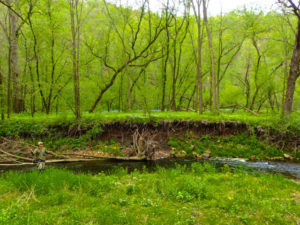 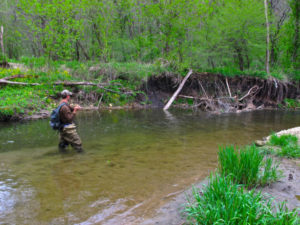 The fish are mostly Brown Trout, all wild, naturally-reproducing. A few streams have native Brook Trout but they are generally the exception in most cases. The streams lend themselves well to teamwork. One person fishes while the other coaches and scouts out the next spot from the bank and nets fish.

After a fish is caught (or hooked and lost), the roles are flipped. The fish are where you expect them and the fishing is fairly straightforward, especially earlier in the season late-April through early-June. 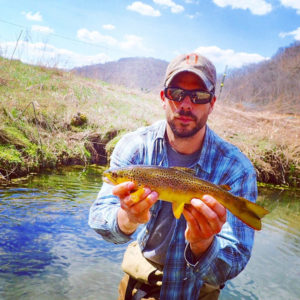 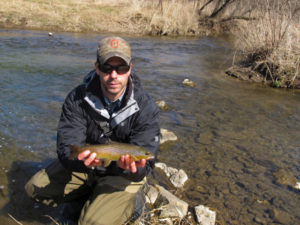 The highly productive streams support huge densities of trout and though the browns generally top out around 12″ to 14″, there is a lot of them. I have caught some much larger fish, but those 20″ and over in the Driftless streams are not common. They really aren’t that common anywhere to be honest, though.

The Driftless region is really unlike anything we have here in New England and truly has to be experienced to be fully appreciated. It’s not just the fishing but the scenery, the quaint historic towns, the supper clubs and taverns tucked away into the steep coulees….

I could go on, but, hopefully, I was able to pique some interest in this unique fishery. I’ve got plans to get back home and fish this area again very soon, probably not this spring, unfortunately, but certainly next year. It’s too good to be away from for long. In the meantime I have all this amazing diversity here in New England to keep me interested!