It’s been a while since I set out with a clear plan to fish streamers.

I had a successful nymphing session on the day before Thanksgiving, highlighted by a stout, multi-year holdover brown. After messaging with Andy Lyons about the likelihood of the fish being a wild specimen, the topic shifted to the movement habits of larger trout and settled on the present situation: The spawn is over and the fish are hungry.

“Now is when you can get them on streamers,” he said.  With a promising forecast, I planned to hit the Farmington in the morning and decided I would start by throwing a streamer.

With a forecast high in the mid 50s and calm conditions, I set out optimistically. I planned to keep moving and cover water quickly with the streamer before changing over to nymphs later in the morning. The thermometer had a long way to go when I suited up that morning. With temps in the 20s and no one in sight, I began working a nice riffle at the head of a pool.

I hooked an average-sized brown right off the bat, which kept me focused in spite of the cold conditions and the ice accumulating on my guides. Another fish and a solid hit confirmed that my plan was sound.

Working my way upstream, I found fish in likely spots, holding near structure in active feeding lies. I worked the fishy spots with short casts first, making progressively longer casts to cover water before moving on.

After a few more 12-14″ fish, I made a quartering upstream cast into a nice pocket and my streamer was crushed. I knew this was a good fish as it revealed itself by coming clear out of the water several times. Keeping the rod tip low to keep its head down and applying side pressure, I brought a beautiful fish to net that taped at 18.”

This fish was a stunner with a full adipose, translucent fins, and a blue cheek dot.  Ice was no longer an issue as the sun rose higher. The bright conditions now allowed me to actually see fish following the streamer as I worked my way through some shallow pocket water. This was water a lot of anglers would have walked through or bypassed altogether.

I found a steady, moderate speed retrieve worked best as I fished a 3″ olive conehead zuddler on a floating line. Working my way through the shallow pockets, I encountered several larger fish, 16-18″. I had a hit fairly close as I lifted the fly out of the water to cast.

I dropped a short cast into the same pocket and let the fly swing when I noticed a nice fish turn, move to intercept, and eat the fly. Pausing a moment to ensure a good hook set, I drove the hook home and watched the fish do a few head shakes before taking me in circles a few times.

I again kept a low rod to keep the fish down in the shallow fast water and was happy to bring a left eye, orange elastomer tag survivor strain male to the net.  According to the Connecticut DEEP website, this tag indicates a fish stocked in either 2014 or 2015.

The good action kept going. It was an absolute blast to watch fish crush my fly in the shallow, clear water.

As I moved to deeper, slower water, the action died off, but, I learned an important lesson. Wading along the shore to exit the river, I stumbled upon a huge brown, well over 20 inches that was just as surprised to see me. Trapped between me and the bank, the fish moved back and forth in a confused manner before darting past me to safety. The markings and coloration on this big fish were stunning. This isn’t the first time this has happened recently. Note to self.

What a great morning it was and a nice change of pace from nymphing.  I got some much-needed casting practice, and it was fun to have a strong hit come to the hand with some real quality fish. Best of all, I had the river to myself.

If you have a chance to get out and target some of the hungry, post-spawn fish before they head to the winter lies, take advantage of the opportunity. Cover water and move quickly, the fish will let you know if they’re home. 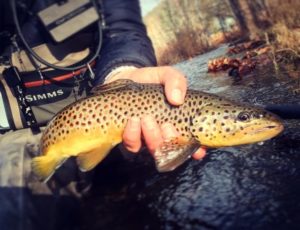 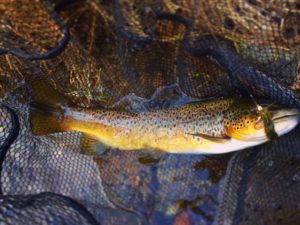 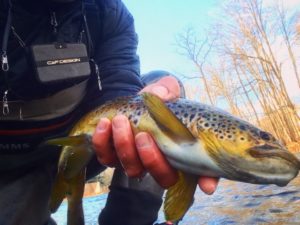