I was down on Cape Cod all this past week for work. Beautiful weather although it was a bit unseasonably hot and humid early in the week. I had plenty of opportunities to fish after work and the fish were cooperative for the most part. This is my second fall in New England and, though I didn’t have chances to do much saltwater fishing last fall, I’ve always heard that the fall is spectacular for stripers all along the Massachusetts coast and bluefish and false albacore mostly along the south Cape Cod shore.

The action did not disappoint. Schoolie stripers were intensively aggressive chasing and crashing on the superabundant bait that saturated the inshore waters – thick schools of peanut bunker, juvenile herring, and silversides were everywhere. Such a prolific season when all the young-of-year bunker and herring begin schooling and moving out into main estuaries, creek mouths, bays, and other nearshore structure.

Myself and a few friends and coworkers hooked up with huge numbers of schoolie stripers at several major creek mouths on the outgoing tide. Swinging flashy herring/bunker patterns brought strong strikes on nearly every cast. Nothing big but a lot of action. I’m still struggling to establish a pattern for bigger stripers from shore on the fly. I have some ideas but I just haven’t put them into action yet. Maybe later this fall but I think for sure next year my saltwater goal will be all about trying to target larger stripers on the fly. 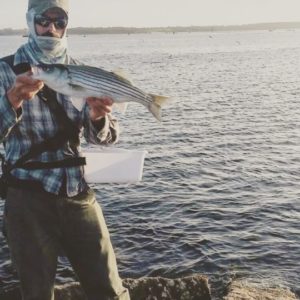 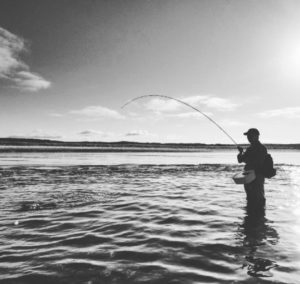 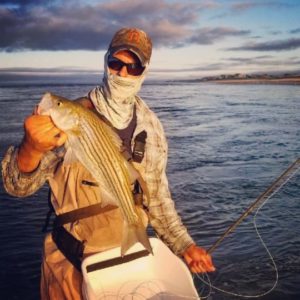 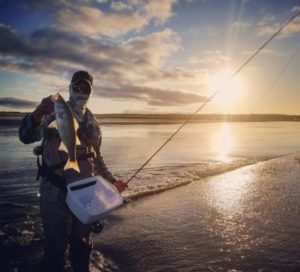 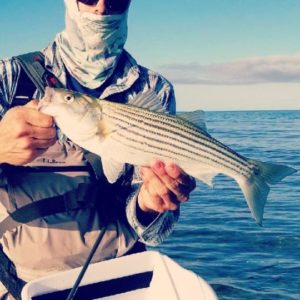 After getting a fill of schoolies we turned our attention to trying to entice false albacore on the fly. These fish are real speedsters and present only a fleeting opportunity to shore-bound fly anglers. Still they do present good chances of hooking up if you are in the right place at the right time. There’s no other fish available to a shore angler in fresh or saltwater in New England that compares to a false albacore. They take your fly at top speed, which is incredibly fast, and just keep on going. I’ve never been into my backing that fast. In fact I don’t think I’ve ever been that far into my backing, ever. It was so cool. They are awesome looking fish. Almost like they are made out of metal. A machine. I’m hooked. 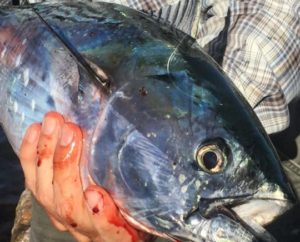 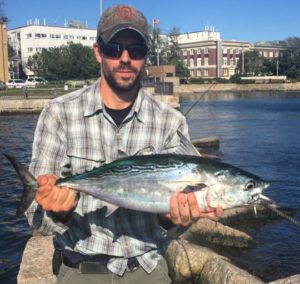 The albies were mixed with schoolie stripers and bluefish along with birds. All feeding on the untold thousands of peanut bunker in the area. The bunker schools were so thick that I hooked several just stripping my fly back. 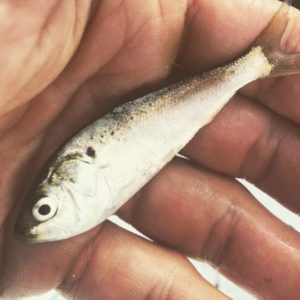 My buddy and I both caught only one albie a piece but it was worth the effort. Hot fly was called a “bonito bunny”. Not much to it but a white rabbit strip. Also caught a few beautiful Cape Cod sunsets to go along with the solid fishing last week. 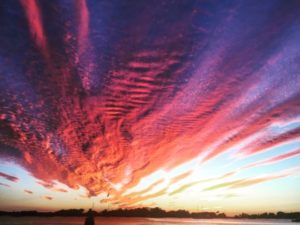 Anybody else do much fall saltwater fishing?