As fishermen, we are all infatuated with the concept of luck, whether we choose to admit it or not.

My luckiest moment was when my colleague introduced me to our clients in Montana. They have offices throughout the entire state, from Billings to Missoula, and many others in the PNW region.

Visiting them twice a year, I finally began packing my 5wt with my suit bag, which is where the story of my most recent trip this past August begins.

This year I integrated an “outdoor meeting” into my interstate travel. We were set to fish the Boulder River early Monday morning, in order to meet my client in Billings on time, I had to fly from Boston on Sunday morning. With some spare time on Sunday afternoon, I made my way to the Stillwater River (about an hour west of Billings) and hit the water ASAP.

It didn’t take long to find a run with fish in it. I landed a slew of trout and whitefish, most averaging around 14″. Mixed into those catches were some behemoths that broke me off 5x in the first seconds of the take. This happened more than three times, costing me multiple rigs (stonefly and caddis nymphs FYI) and shaking up my confidence for the following day.

I woke up early like a kid on Christmas on Monday morning, peeked outside and it was down pouring with no end in sight. My client texted me saying we had lost one angler but that we were definitely still going. I packed all my gear up and ran outside to meet him.

We headed west – this time for over an hour. My client was taking me to his homewaters, the upper stretch of the Boulder River. They had filmed some of A River Runs Through It here and it was obvious to me why.

This stretch is known for its more exclusive private water and healthy Yellowstone Cutthroat population.

We geared up and got in, working very hard for our fish. After the first couple hours,we’d only caught one fingerling rainbow a piece.

Moving further downstream without much more luck, I turned over a rock and saw it littered with cased caddis. Same story upstream, but these were a creamy yellow color as compared to the neon green caddis a mile up.

I immediately switched my rig to match what I’d seen and all of a sudden trout was striking on every drift I made – by far my most Zen moment of fly fishing to date. These were all smaller wild fish, but I was grateful for each of them. 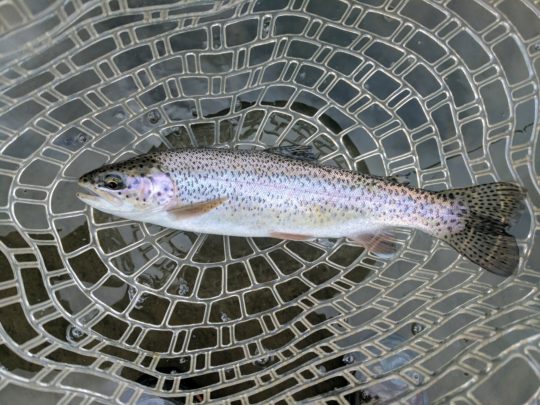 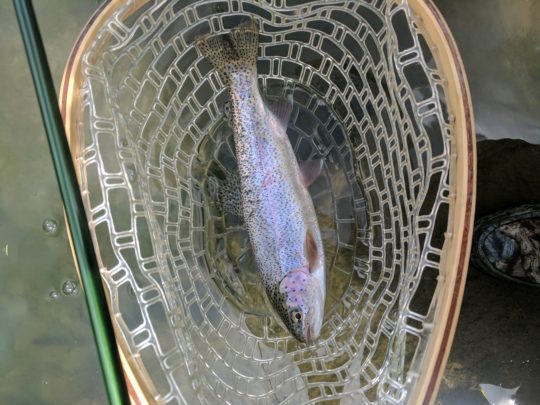 Somehow neither of us caught any Cutties before it was time to call it a day. We packed it in and headed back to Billings.

Before anyone gets too jealous, it’s important to note while this is my favorite business trip of the year, it’s also torturous. I’m grateful for every moment on the water but driving across the state of Montana with stops in Bozeman, Butte, and Helena and no time to fish those areas, is excruciating. I had at least planned my stop in Missoula to allow for a few hours of fishing after meetings.

The forest fires had caused some incredible smoke in the Missoula area, to the extent that my rental had a thin coating of ash every time I left it parked for a few hours. The smoke seemed to keep others off the water but wasn’t enough to deter me.

So I packed the car and drove east, this time to the well renowned Rock Creek. Every single fly I tied on was catching fish, the same mix of whitefish and smaller trout. I worked my way further downstream and found a nice stretch where this happened:

After the release, I noticed the sun disappearing behind the mountains, so I began fishing my way back to the car. There was a heavy caddis hatch going on so I tied on an X-Caddis and trailed a beadhead soft hackle behind it. I must have caught 20 little wild trout on my way back to the car, including my first ever bull trout, albeit on the smaller side:

The same run where I caught my nicest bow, I tried dead drifting a streamer. This time stepping up to 4x as the last minutes of twighlight began to pass me by.

At the end of my drift, something very large attacked my streamer. I kept the fish on for a couple minutes, but it took off downstream and snapped my 4x off.

I can only imagine it was some massive brown trout. It was power and weight that I’d never felt at the end of my 5wt before as it doubled over and shook my rod seemingly effortlessly. It was simultaneously an exciting and heartbreaking way to end my Montana trip before I drove to Coeur d’Alene and Spokane for my last meetings and return flight to Boston.

I can’t wait to get back out there. If you’ve never been, start planning now!

4 thoughts on “Big Sky on the Fly”