Spent a couple days on the Deerfield River this weekend. First time fishing the river and being in that part of the state. It’s pretty cool that one weekend I can be on the flats chasing stripers, keeping an eye out for sharks, and the next weekend be in the “mountains” fishing nymphs during the day and dries during evening hatches for tailwater trout.

I focused my efforts on the section of the Deerfield between Zoar and the Fife dam. There are a number of pull-offs for accessing the river and a huge amount of great water all throughout this section. I want to thank the readers who commented on the Deerfield call for information posted the other day by Jo, the advice from you guys certainly helped me on the river this weekend. I’d especially like to thank Brian who actually met me out at the river and fished with me Saturday evening/night.

I got to the river early enough Friday to get a few hours of fishing in but I got skunked. My initial impressions were very favorable even with the lack of catching. I think part of it was that the hatch that was supposed to happen never really materialized, at least in the area I fished that evening. I fished to a couple risers in a nice flat below a big pool but they weren’t rising steadily and there were few bugs in the air so it was tough. Being the holiday weekend all of the campsites I had checked on were booked up and it seems that camping outside of designated campgrounds is frowned upon here in the East. So that night I drove into North Adams and went with the old standby of sleeping in my car in the Wal-Mart parking lot. For those of you that don’t know, Wal-Mart, while not necessarily encouraging overnight car camping, at least tend to look the other way. I’ve slept in Wal-Mart parking lots all over the country on fishing and hunting trips. It’s free and convenient and almost every small town has one. Don’t get me started on the demise of local businesses because of Wal-Mart but this is one thing I like about the store!

Saturday morning the fishing was solid, not spectacular. I picked up about 10 small-to-medium rainbows on wooly buggers and small, dark nymph patterns. 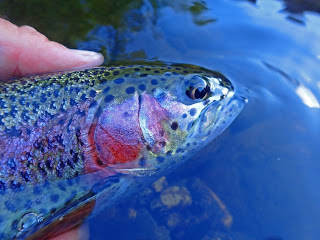 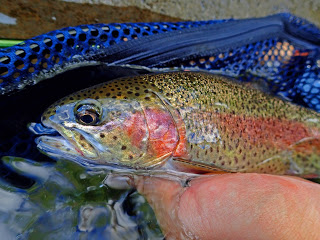 This was an awfully beautiful part of the state and if I squinted hard enough I could almost imagine I was out West. 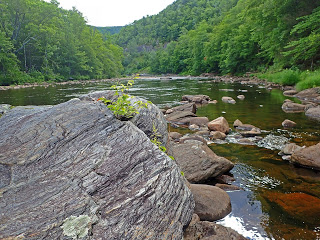 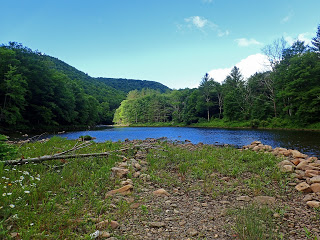 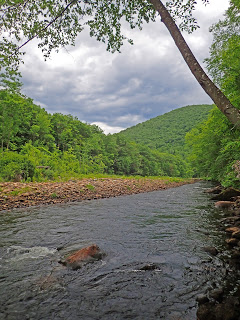 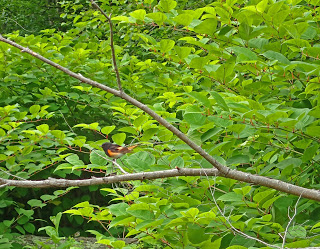 Saturday evening I met up with Brian. He was going to show me around a bit and we’d fish the evening hatch, and even do a little “mousing” after dark in hopes of luring a big brown. Brian is a talented fly angler and really knows the river well so I was glad for his company. We fished just downstream from the Fife dam and right on cue about 8-8:30 the anticipated sulphur hatch got going. To be honest the hatch itself was more of a compound hatch rather than only sulphurs – sulphurs made up the bulk of the bugs but we also saw some large, lumbering mayflies (brown drakes?), little yellow stoneflies, large tan caddis, and smaller, darker, mottled caddis all at the same time. We fished sulphur imitations. Mostly duns and emergers right through the hatch, which went strong until after 9:30. Fish were rising everywhere with regularity. Brian did better than me but I think we both struggled a little bit considering there were so many fish around. Everything I caught was on the emerger. Nothing huge but good fish. There were definitely some larger fish working but we couldn’t tempt any of the real big boys that night. 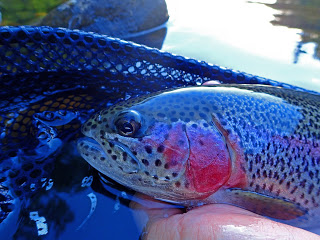 After the hatch petered-out we went downstream to a couple different spots to throw some big topwater mouse patterns in the dark. So much fun! I’ve only done this type of fishing a couple times and it’s exciting when you never know what you’re going to hook. Possibly a huge predatory brown. Right away Brian got a small rainbow that had no business trying to take down a mouse. Following that first fish we didn’t get any more action but fishing at night with big flies like that is boom-or-bust for the most part. I did hook into something that felt pretty substantial at the second spot we tried but after a few headshakes it was off and I never got to see if it was big or not.

Definitely a good trip and I hope to make it back up that way soon to get to know the river better and maybe run into some bigger fish. 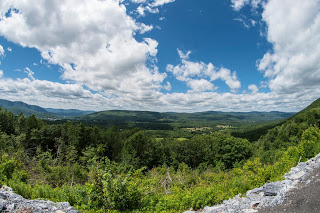 How did everyone else do this weekend?