Headed out to Wachusett for a couple hours this evening after work. A reader of the blog is going to be in town for a few days on business and he was interested in fly fishing for some bass on Wachusett so I needed to do some advance scouting. I haven’t been out to the reservoir in a couple weeks and since the wind finally died down I figured tonight would be a decent chance to get out and scout around. I went to a new spot off of access point 35 and walked the bank looking for fish. It seems that the spawn is over – the few clean beds I saw were abandoned but I’ll check some other areas tomorrow to see if the bass have finished spawning elsewhere in the lake as well. What was curious is that it looked like the bluegills had also moved off their beds, which seems early to me.

The low bank and the angle of the sun made it difficult to spot anything much more than about 20 feet offshore. I had to find a higher vantage point. I ended up coming across a rock outcropping right at the water’s edge. I climbed up, peered over, and found what I was looking for. A small group of nice-size smallmouth were lazily cruising along the rock face. They didn’t seem to be on the hunt though. I tried to flip a crayfish pattern in their pathway a few times but they were disinterested, even a little spooked so I begrudgingly moved on. Just past the outcropping the shore curved around into what was a shallow bay. I tried the crayfish pattern for a bit longer but all I got out of it was a few medium bluegills.

I spotted a few smallish largemouth bass cruising and it looked like they might be actively searching for something to eat. I switched over to a long, skinny popper/slider type fly pattern. It works almost like a mini Zara Spook if you’ve heard of that. Anyway, that shape of popper has always done well for me with bass back home. The largemouth were not interested or they had moved on while I retied. The closer to dusk it got however, the more activity started to occur in this shallow bay I was fishing. I began to see the telltale signs of larger bass chasing prey and slashing at the surface in the skinny water. In short order I had hooked and landed 2 real nice smallmouth who absolutely hammered the popper and fought like crazy, jumping, tail-walking. Very aggressive, strong fish. I can only assume that these guys (or gals) are into their postspawn feeding binge. I’ll probably be out scouting the next couple evenings so I should have more reports for those of you interested. Summer time smallmouth are a blast to catch and fairly simple to pattern as long as the weather doesn’t go crazy. Check out the pictures below (they’re a bit out of focus unfortunately but you get the idea). 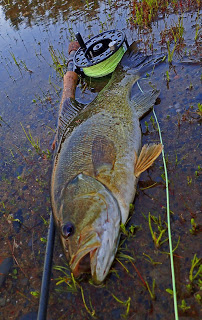 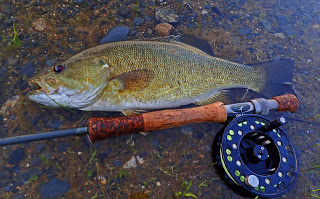