Finally got out after some stripers today. I’ve been wanting to do this the moment I moved to this part of the country. Let me preface by saying that I have very minimal saltwater experience, one afternoon cutting out on a conference and wading for redfish around Jacksonville, FL (got one!) and a combo DIY/guided trip last year to Banana River-Mosquito Lagoon area in east-central FL. That was a great trip. I hooked and landed some real nice redfish and seatrout the two mornings I went out with the guide (by the way if any one is going I have no hesitation recommending Wily Le at Native Fly Charters, great guide, photographer, and a pretty cool dude). I hooked and lost several tarpon while fishing on my own and avoiding alligators in the creeks and marshes in the area.

After talking with some colleagues who fish and researching a bit online I decided to try Barnstable Harbor. I liked that it was very kayak friendly and had extensive hard-bottom flats to wade. I left my apartment about 3 this morning to try to beat the crowds at the kayak launch – turns out I didn’t have to worry too much about that. I launched at the Mass Audubon Long Pasture Wildlife Sanctuary. It’s a carry-in access point with parking along the narrow road and at the Mass Audubon Sanctuary parking lot up the road. The parking situation at the Barnstable Harbor access points can be tricky with some conflicting and incomplete information online. Most information I found provided stern warnings about parking at the launch sites as the spots were reserved for those with “resident” permits. I arrived at the Mass Audubon site just as a local fly angler was gearing up and he gave me a few well-appreciated pointers about the harbor and also eased my mind about the parking situation. He said I could park along the road just fine…I’m not sure why the information on the internet said otherwise but it’s something to look into if you end up going.

It was high tide when I launched so it was a short carry to the water. I’m glad I brought waders though, the water was a chilly 55 degrees. First off I headed east along the shore and checked out the Mill River estuary to see if I could spot any fish cruising around in the flooded grass. Nothing going on but a pretty sweet spot. I’m sure there are fish in there during particular times/tides/etc. I’m still learning. Below are a few pics from the Mill River estuary including a cool crab I found (it was dead, I couldn’t catch any of the live ones!). 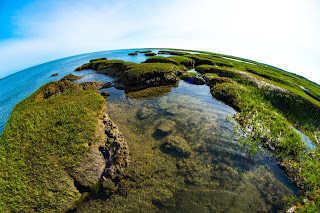 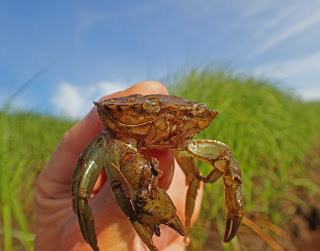 I have become a bit obsessed with doing landscapes with the fisheye lens. I just think it gives such a cool perspective. I’d love to try it out on some fish but it really looks best when I can take the picture when someone else is holding the fish.

After being the estuary and river for a while the tide really started draining out. It’s a pretty cool experience to see how much the water fluctuates right before your eyes. It fell over 9 feet in elevation over the course of just 5-6 hours! I followed the tide out through the mouth and onto the flats that were now becoming wadeable depth. 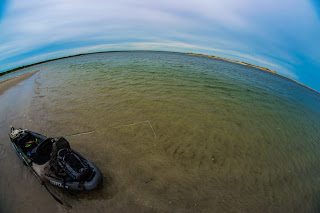 “Flat” is actually a bit of a misnomer. There were small features everywhere cut into the sand – trough, dropoffs, holes, bumps,…all structure that funneled the tidal current and brought bait along with it. Needless to say the structure and current areas was where the predators were going to be found here. Kind of like in a river. I found a really nice trough with a strong current running through it. The type of spot the guy at the kayak launch told me about. I fished it almost like fishing a long run in a river, down and across with an olive and white clouser. The retrieve was quite a bit more aggressive than most trout streamer fishing I tend to do though. The clouser I was using is a decent imitation of a sand eel, a major prey item in this type habitat.

I fished nearly halfway along the length of the trough when I got my first glimpse of stripers crushing bait on the surface. It was only one or two crashing just a couple times but it was violent and they were big. After this display I immediately hooked up with a small striper. My first ever. 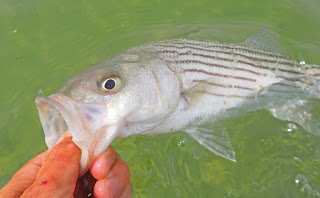 I proceeded to hook and land 2 more a little bigger and almost identical size to each other. I was pumped even if they weren’t big. They fought hard and are cool looking fish. 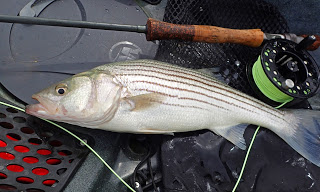 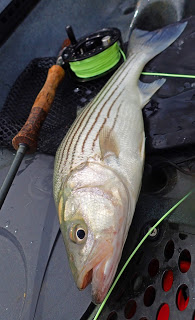 By then the tide was just about slack and starting to slowly turn the other way. I met another guy out on the flats and chatted for a bit about the fishing, turns out he was a guide and had the day off. He gave me some great information. Really nice people out there. I explored around a little bit more but the forecasted thunderstorms started to blow in about 2 so I had to cut the trip short. I did find these guys on my way out. I had to get a quick picture but I don’t think they were too happy with me interrupting. 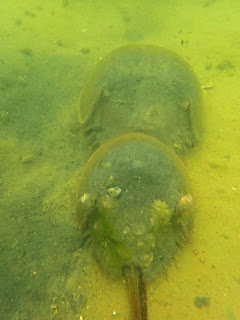 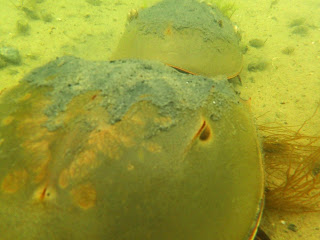 All in all a good first Massachusetts saltwater trip. I’ll be doing this again! How did everyone else do this weekend so far?