It was a bit of a slow day for me fish wise, at least at the first spot I tried. This morning I checked out the lower end of the catch-and-release section of the East Branch Westfield River. I fished and hiked my way upstream for most of the rest of the day. I must’ve gone about 3+ miles. To be honest I was really unimpressed with this particular section. I know it was my first trip here but after reading about the river on this blog and elsewhere I was expecting something different. To be sure, the river and the landscape are both beautiful in this stretch but the trout habitat didn’t seem that great. Long expanses of wide, shallow, rather featureless riffles and runs. Not much nice looking holding water. The decent water I did find I fished the crap out of and came away with only 2 rainbows and a brookie. I tried a number of different nymph rigs. The brookie came on a small black stonefly whereas both the rainbows were on a very tiny (I think #18 or #20) flashback BWO emerger type bug. Unfortunately the fish did not cooperate for the camera (I finally bought a net but it hasn’t come in the mail yet…). With the fishing slow I was able to spot some cool stuff and take a few pictures. 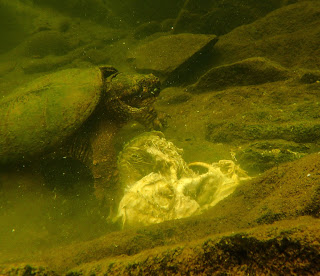 This big guy was going to town on some dead mammal on the bottom of the river – picking up the carcass and shaking it like a dog. 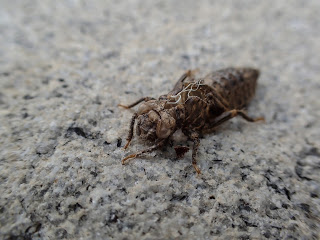 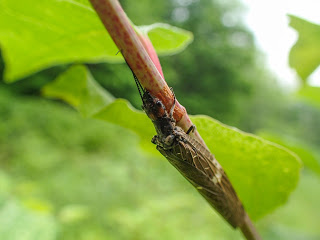 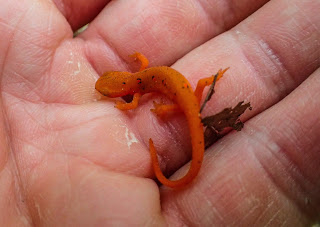 Juvenile Eastern Newt. They’re a little different from most salamanders in that the juvenile stage (here) are terrestrial while the adults are aquatic. 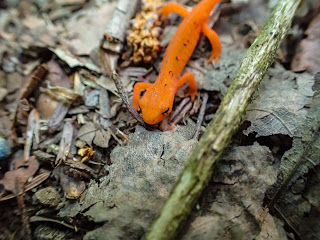 Does anyone out there fish this section of the river? Am I missing something…thoughts, comments, suggestions?

After leaving the lower end of the catch-and-release section I headed upstream to check out the Chesterfield Gorge area. This is where I should have spent the day! Much more in line with what I was expecting. Because I had spent all my time downstream I only was able to fish the gorge area for an hour at the most. It didn’t disappoint. The first deep slot downstream of a plunge pool yielded a nice rainbow on an oversize stonefly nymph. This one actually cooperated for a picture. 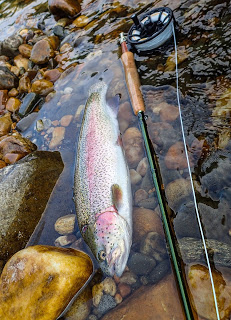 I snagged and lost the nymph so I switched to a cone-head sculpin streamer. In the next few features downstream I had 3 rainbows about the same size absolutely annihilate my streamer – 2 of the 3 I actually got to see shoot out from their lies and crush it on the swing. Pretty fun end to what had been a slow day. I’ll be back here, beautiful section of river. 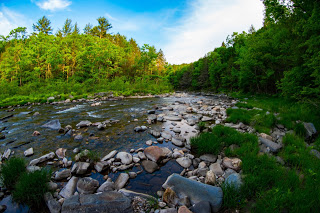 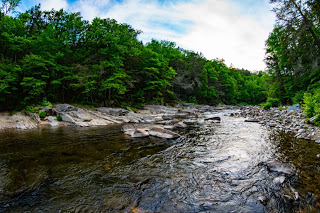 How did everyone else do today?

3 thoughts on “First trip to the East Branch Westfield”