This past week turned out totally different than what I was expecting.

The surprises began on Sunday.  Normally, any thought I would have about fishing on Mother’s Day would be considered for about two seconds and then banished to the sphere of my brain where all ludicrous thoughts are sent.  But this past Mother’s Day, my wife was fighting a cold and just wanted to be by herself.  She only had to suggest once that I go fishing.

After church, Drydan and I rendezvoused in Natick and drove about a half hour down Mass Pike to the Quinebaug River.  At 2 pm, when we arrived at the parking lot by the Westville Recreation Area, I got my second surprise.  The road that allowed fishermen to drive up the river was gated shut.

Bummer! I knew it was closed for the winter, but come on!  This was May: stocking of the rivers had been going on for at least a month.  I totally expected it to be open by Mother’s Day.  But it wasn’t.

Drydan suggested we walk up the road.  Maybe the stocking truck had the key to the gate.  If we couldn’t find any fish, we could walk back to the car and drive 15 miles down I-84 to the Willimantic.  So that became the game plan.

According to the info on the MassWildlife stocking website, the Quinebaug River had been stocked with rainbows on March 31 and stocked with brookies just a few days before Mother’s Day.  But with the gate locked, they probably put them all in by the lower bridge where we parked.  We would have fished there, but there were three bait fisherman that had the water near the bridge occupied. 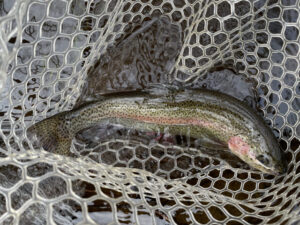 We walked up to an area where we had had some success in previous years.  I was all rigged up so I jumped into a good run while Drydan finished getting his flyrod set up.  About the time he was rigged up, I felt a tap.  Could have been a fall fish.  But not long after, a beautiful rainbow subtly took my pink squirmy.  It wasn’t that big, maybe 12-13”, but it looked healthy and had great colors.

I was delighted and surprised to find a trout, and hoped that there would be more.  A dozen casts thereafter, a twin to the first rainbow took a Higa’s SOS.  Then another one took the Squirmy.  It was a bit lengthier than the first two.

Meanwhile, Drydan was fishing on either side of me and having bad luck with several long distance releases.  Finally, after catching one more, it felt like we had fished that spot dry.  We figured that the rainbows that had been stocked down by the parking lot on March 31 had worked their way up the river and that’s what we were catching. 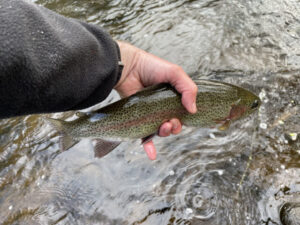 We decided to head back to the car, but stop and fish a place or two along the way.  It was getting late in the afternoon, the wind was considerable, and we didn’t want to take too much advantage of our wives’ kindness to us.

Drydan walked into a really interesting pool, and I walked down about 100 yards further.  About the time I was getting ready to fish a run, Drydan started yelling and signaling for me to come up to where he was.  I figured he had found the motherlode of stockies.

But as I was about to exit the river to walk up to him, I almost stepped on a rainbow.  It was barely alive and struggling to stay upright. While I felt sorry for the trout, it also occurred to me that it might have friends nearby and I shouldn’t leave this pool until I had fished it.

On my second cast, a 16” rainbow slammed my Prince Nymph.  It took me downstream a little ways but eventually I rassled it into my net.  I also caught a 7” stream-bred brookie and had an unseen, long distance release from that same area.  Drydan had caught a nice rainbow, a largemouth, a smallmouth, and some fall fish up where he was fishing.

It was a surprisingly good day for a last-minute jaunt on a Sunday afternoon.

What I was looking forward to most this past week was a four-day trip to a private fly-fishing club in the Catskills.  My host was going to pick me up at 7:45 am Thursday morning.  All week I’d been tying flies, getting my gear in order, and I had bought a NY nonresident fishing license.

Then on Wednesday morning, my wife tested positive for Covid and I knew my fishing trip was doomed.  There was a good chance that I could come down with Covid too, and I couldn’t risk exposing my host and the others members of the club.  It wasn’t a hard decision to call my host and tell him what had happened.  He was very gracious about it. 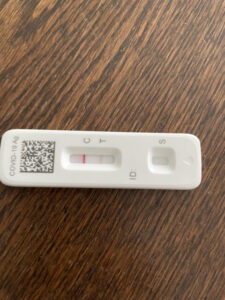 On Friday, today, I tested positive for Covid.  I wasn’t planning on writing a story about my fishing trip on Mother’s Day, but now I have plenty of time on my hands.  So that’s one other thing for which you can blame Covid.

Have you ever noticed how so much of our lives aren’t really under our control?