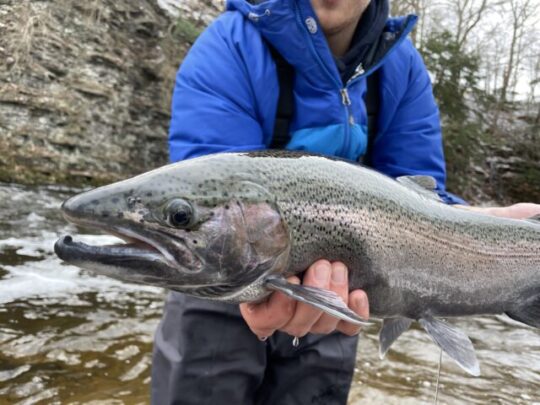 I recently had the opportunity to spend some time on the Salmon River in upstate New York.

This river flows out of Lake Ontario, and is home to some of the most intense freshwater fishing in the Northeast. Because of the sheer size of the Great Lakes, anadromous species like chinook salmon, coho salmon and steelhead thrive and migrate between the lake and its rivers in the same way that Pacific Coast species would in the sea. Every year thousands of anglers chase these monster fish as they make their way from the lake to the Salmon River in the fall through the winter and spring.

My goal for this trip was to target the steelhead, who make their way to the river around October/November and will stay there until they spawn in the spring. I had been out to chase these guys in April before to catch what we call “drop backs.” The fishing in the spring is more productive in a numbers sense, but usually the fish themselves are smaller and skinnier due to the spawn. During the spawn, these anadromous fish stop eating, and focus on reproducing.

Catching these drop back fish is a blast, but you will mostly catch skinny females who have lost a lot of weight during the spawn. Don’t get me wrong, these are an absolute thrill to target, especially on a fly rod. They still fight hard and run you to your backing. However, I was after big winter males.

To make this happen, I booked a guided trip with my friend and local guide Tony Gugino. Tony is a man who knows his fish. He spends half his year guiding in Alaska, and the other half guiding in Pulaski, NY for king salmon and steelhead. He grew up in Pulaski, and has been studying this water since his childhood. Not only is he a knowledgeable guide and angler, but he is also a down to earth, funny and all around enjoyable guy to hang out with.

We started the morning meeting at the guide service around 6 am when it was still dark out. We took a few minutes to drink our coffee, catch up on life since we had last fished together, and assemble our gear. We were targeting these behemoth trout with 7-weight spey/switch rods, using floating lines and egg flies. Tony warned me as we went out that today was all about quality, not quantity. That was fine by me.

In my experience, playing the numbers game is a great way to dampen your day and miss opportunities to be present in the moment, appreciating the beautiful fish you actually do catch. After screwing in a few more studs in my wader boots (the river is notoriously slippery), we were off. We walked the river, waiting for sunrise.

As we waited, Tony showed me some footage from his summer in Alaska, chasing wild, native rainbows with mouse patterns. That was a great way to get amped up for steelhead fishing!

When first light finally appeared we started off in shallow pocket water, fishing from the bank. We fished for a few hours without a single bite. So after moving around a bit, we finally decided to jump in the truck and head downtown, off of the private guide waters, and into the public stretch of the river. Almost immediately, I had a fish on. My heart started racing as the steelhead started taking line. However, as quickly as it began, it did a big head shake and was off. I was encouraged that we had found fish, but every angler knows that heart sinking feeling of losing a big one. Oh well.

We fished this water for a bit with no more action and decided it was time to move. We made our way to another spot on the river with deep pools that tail out and turn into shallow riffles. We changed patterns a few times and finally settled on a peach/pink egg.

As I mended the line going into the tail out, it happened. Indicator down, rod up and fish on! It started off with a few head shakes. I could tell this steelie had some size to it by the shakes alone. Just when I thought I had this guy under control, he ran. Within a few seconds I was into my backing. Tony had to keep reminding me not to palm the reel. With steelhead, a good drag is essential, and having it set at the right amount of resistance is key. We were using 8 pound fluorocarbon, and if you palm the reel when that fish is on a strong run, it’s very easy to snap off.

After about 10 minutes I was finally able to tire him out enough to get him near shore and lift his head up so Tony could net him. When I saw this fish, I was blown away! It measured out over 30 inches and Tony told me it was right around 10 pounds! After a few pictures, we safely released this beautiful fish back into the water, watching it splash as it swam away. We took a few minutes to relish and appreciate the experience. We were soon back on the water throwing flies. 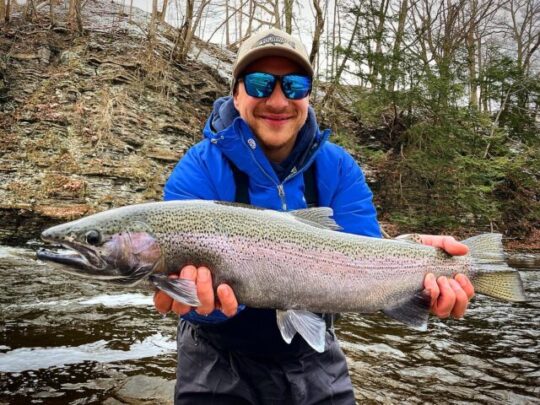 Over the course of the day, we had a few more hookups and managed to land another smaller steelhead, and lost a few big ones. That’s just how it goes. Quality over quantity. I had no complaints. As the sun set, it was time to call it a day.

As I drove home, I reflected on what an amazing adventure it had been altogether. If you ever get the opportunity chase these amazing fish, take it! I promise you will not be disappointed! 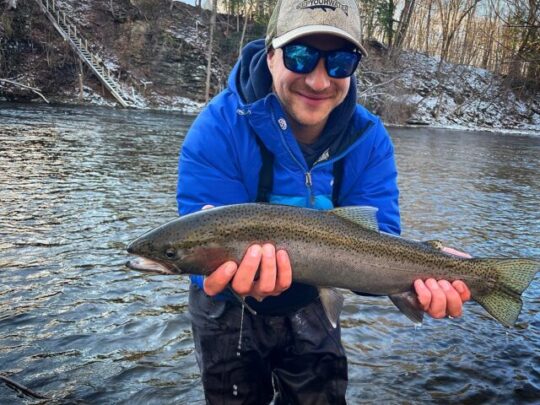