I’m aware of very few professions that are as demanding as being a professor at MIT. Those men and women do their research night and day, weekdays and weekends, year-round.  Furthermore, they do it because they love it.

So when my friend Brent, an MIT prof, said he was free to fish last Saturday, I was going to try my best to make it work out.

But two Saturdays ago was quite the test for wading fishermen.  The rivers in New England were swollen once again by a long, heavy rain on Friday.  The Deerfield was ridiculous.  The Farmington was only for the brave.  The water gauges on the freestone rivers looked like the trajectory of a rocket launch.

I don’t consider myself a good enough fisherman to take on the Swift, nor do I like the crowds, so I avoid it if at all possible.

Even though our prospects didn’t look good, I had my eye on the USGS gauge of a freestone river that went from 70 cfs to 700 cfs on Friday afternoon, but had begun receding by 9 pm Friday evening.

I didn’t know for certain, but I suspected the river would be wadable if it was below 225 cfs. Brent and I decided that if the gauge showed that it was down to 250 cfs at 7 am Saturday morning, that we would give it a try.

We arrived at the river at about 10 am.  The air temperature was 35 degrees, and the water level was higher that I was expecting.  With an extra degree of caution, we carefully crossed the river to get to the side from which it was easiest to fish.

What was normally perfect pocket water was now barely fishable. The “money” spot yielded no bites. I had pretty well given up on us catching anything.  The river had been fished hard all fall, and the high water level was just another strike against us. The air temperature was cold, and maybe that was turning the fish off too. Furthermore, I was beginning to feel the effects of the hole in the bootie of my waders.

We tried some shallower water below the money spot.  On the last cast before we left, Brent hooked into a nice rainbow that was fooled by a Pat’s Rubber Legs.  It’s amazing how one fish can make the whole day seem brighter. 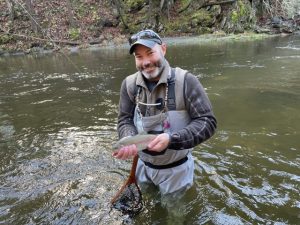 We began fishing the same area with renewed passion.  While I was practicing my top secret technique of letting the fly dangle in the current while I took a few steps downstream, I apparently offended an angry rainbow and he took it out on my fly.  Don’t try to copy that technique; it is for professionals only.

A few minutes of spirited fighting later, the 15-inch rainbow was introduced to my net. I cautioned him about letting his emotions get him into trouble and then set him free.

That was all the action for that pool so we hopped in the SUV and went to another of my favorite spots.  The only action there was a long distance release of a rainbow that was downstream in some very fast water.  I didn’t mind the LDR because I never could have gotten him up to my net anyway.

The last fish of the day came on a 20-incher at the third spot we tried. 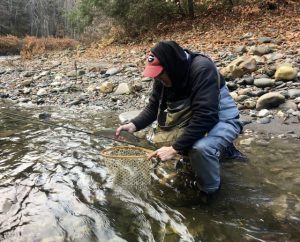 We left the river at 2 pm. All in all, we felt pretty good about hooking four fish on a day when there was not much fishing to be had in New England.  But maybe even better, we had hours of great conversation on the way there and the way back.  Fly fishing is good for friendships.

4 thoughts on “Squeezing It In”