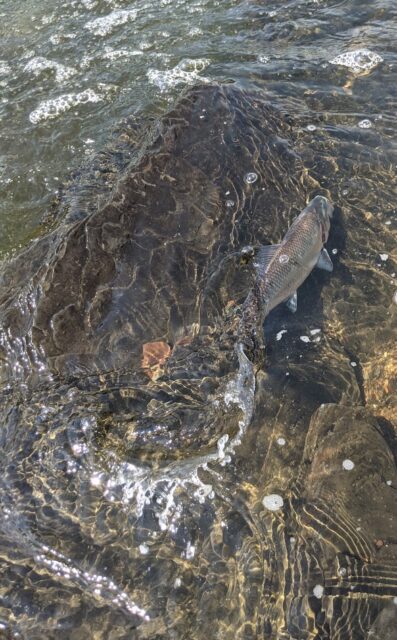 New England, and Massachusetts in particular, is home to an amazing migration of the sea’s bounty to inland. You may be think that it is a hidden salmon run kept secret from the masses by government conspiracy? Well you would be wrong. According to the lowest dam’s fish lift on the Connecticut River, a whopping zero Atlantic Salmon made it up river as of 6/5 this year. Couldn’t find data on last year’s but only three made it up past the fish Holyoke Fish Lift in 2019.

Compare that to the humble American Shad, of which over 225,000 have been counted passing the lift as of 6/5. These amazing fish has had hundreds of thousands of returns every year for years. They seem to be doing all right, which is amazing considering the journey they have to make. These beauties have been described as “freshwater tarpon” for the way they fight and jump and run. They well deserve the title. 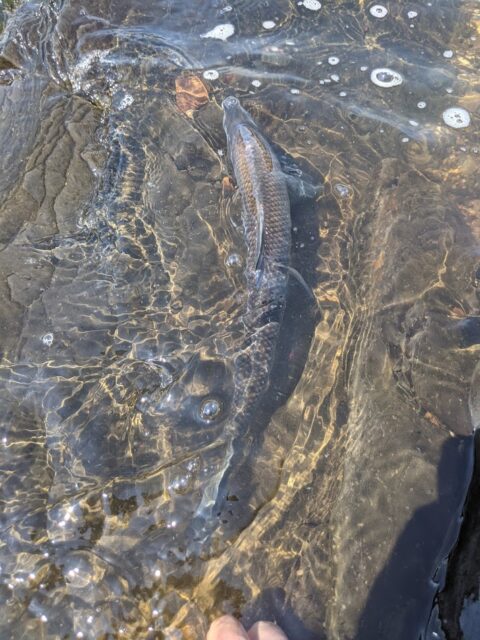 When exploring for shad I almost always start with spin gear (GASP). It helps dial in the bite and keeps you from wasting time untangling line from a wayward backcast.  As they are a migratory fish, you kinda have to keep an eye on the fish ladder counts and when it gets close to that time of year (May to June) you need to go and check your spots.  The further up the Connecticut River you are fishing, the later in the season you can expect to see the majority of fish.

After I find them with a spin rod, I usually switch over to an 8-wt. with intermediate or sinking line. But sometimes floating line is useful too, so don’t leave home without it.  Some might think an 8-wt. is overkill, but considering these fish can get 20+ inches frequently and fight like the dickens, I think you will find that you may be happy for the power an 8-wt. can lend you in keeping these fish on the line in a good current.

I was at my preferred spot last week or so, and I had a lousy Saturday. I saw several hundred fish running past my spot. I couldn’t convince any of them to take. Normally, not too bad a feeling, the bite can turn on and off with these fish. However, the gentleman down stream, using his fly rod was killing it. Saw him land several in an hour.  I left feeling dissatisfied.

But I came back the next day and well, Sunday Fun-day! It took me a while to dial it in, but once I did, it was amazing. I could see thousands running, and I could sight cast to these beauties. I probably had my best shad day ever.  I had been trying to drag the fly through the lower section of the water column, but the fish started splashing at the surface (a sight to see), so I changed the fly weight and let it swing in about 12 to 24 inches of water, just under the surface really. And that changed everything. 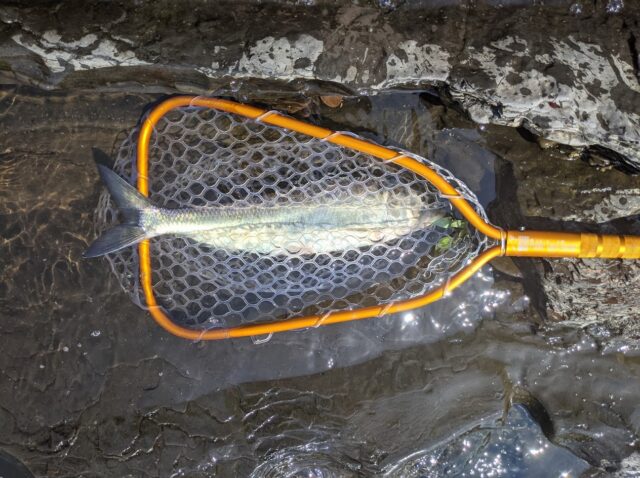 We don’t really know why shad take the fly, as these filter feeders aren’t really feeding on their way up stream to spawn. It is supposed it is some sort of aggressive reaction. I could believe that but who are we to know the motivation of shad? Either way, I started getting hits, but they all didn’t connect. On a hunch, I trimmed my fly up to reduce the tail fibers to only about ¼ to ½ inch instead of the 1 inch they had been.

Now, I was hooking up with shad.  In the picture above it was the central shad fly with it’s tail trimmed that did the best. I netted 15 in two hours. It felt fantastic. I decided to call it after that. I didn’t need to harass them any longer. And the second-to-last fish had been my personal best. It took the reel well into backing. I was feeling satisfied. 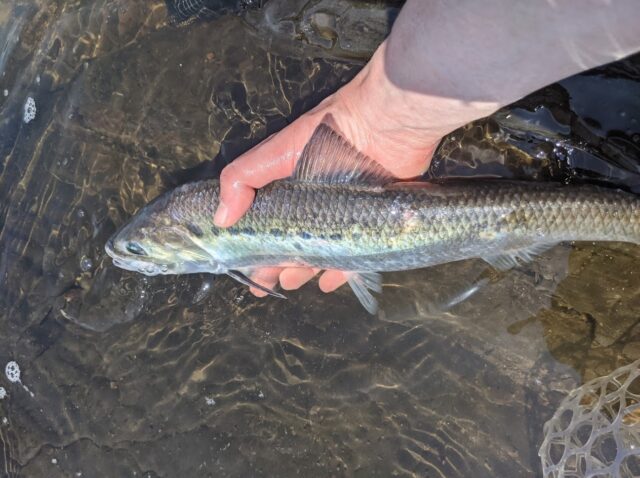 I finished the day with a swim. Which was absolutely necessary after that sunny day on the river. I think, that’s when my rod decided to grow legs and walk away.  IF anyone happened to pick up a TFO 9-ft. 8-wt. off the side of a river recently, I propose two options: if you are a kid for whom this rod will spur you on to a life-long obsession with fishing and conservation, keep it; and, if anything/anyone else, just get a hold of me and I will pay for the shipping to get it back. Bass and pike season are coming and that’s my heaviest rod!

Even with the fly rod wandering off, I have to admit, it was a fantastic weekend of fishing. Shad are underrated, and I think underappreciated. Not too long ago shad runs  (by fish lift count) were less than 50,000 a year. They easily could have disappeared alongside the Atlantic Salmon. Show the shad some love. Fish for ’em, but remember note to take them for granted!

P.S. I know I have recommended this book about shad before, but it’s worth repeating: Founding Fish is a fantastic read.