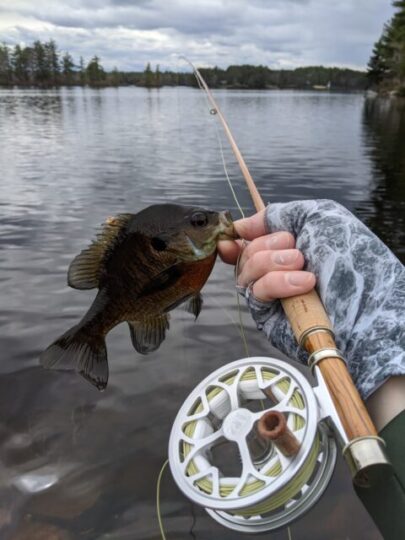 I awoke on Saturday morning to the unsettling lack of sound and a quiet house.  There was a note on the counter in the barely legible print of an 11 year-old boy: “Gone Fishin’ (to the lake).”  Although my first instinct was to hustle downstairs to grab my rod and join my early-rising son and wife, my daughter was still sleeping upstairs so I decided to hang out for a bit.

My wife has gotten the fishing bug a bit lately, which brings me a lot of joy.  I had to grind out work from home the previous day, while she took the kids fishing in my Rav4 with my rod rack and my fishing vest.  Although I was missing out again, I couldn’t help but smile as I fried some eggs.  Upon their return, there was a good helping of gloating from my wife as she caught four fish to my son Wynn’s one (or zero, depending on who was reporting the facts about a purported long release). 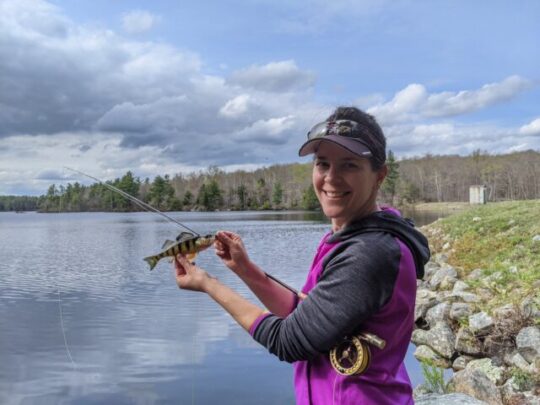 As we debated how to spend our day, my wife, fresh with confidence, championed the idea of a fishing derby in the afternoon.  Everyone bought in, except my daughter Brooke whose fishing interested has waned lately.  We agreed on angler’s choice of fishing method and no tackle restrictions. We hashed out a scoring chart with points awarded as follows:

My wife surprised me by saying, “And, it starts now.” (The lake is about a 0.4 mile walk through the woods from our house.)  Wynn was off like a shot and we heard the door slam as my wife’s declaration still hung in the air.  His parents were left to contemplate if this was the same person we live with during the week, who will start thinking about breakfast five minutes before the designated time to leave for school, only to come back upstairs to grab forgotten books, return once more for a mask, closing with a third and final flourish to go grab a gym uniform.

I rigged up my favorite three-weight bamboo fly rod, and I waited patiently in the driveway for my wife to ready herself as I mulled over my strategy.  At this point I was confident that I could be both chivalrous and victorious and take my time to walk down to the lake with my wife.  Wynn is a very fishy guy, but after his poor performance with his spinning rod that morning, I was even willing to let him use his head start to have his pick of spots.

I decided to stick to my preferred methods and start with a dry fly.  I tied on a small elk hair Caddis fly, with a plan of racking up numbers of sunfish as my strategy.  Wynn had made a beeline for a cove ill suited for the fly rod, as it has a lot of overhanging branches, but he was in position and I noted that he had brought his spinning rod.  I wanted Andrea to take the spot in which she had confidence in the morning, and she quickly began laying out a Woolly Bugger with smooth casts.   I headed for a cove at the opposite end of the dam.  We were all thus positioned within sight of each other and basically within shouting distance. Fish beware, our derby was on.

Brooke’s decision not to fish rendered her the official scorer, and we kept her busy.  I was playing with sunfish on almost every cast, having fun and feeling good about my strategy.  I heard Wynn holler about a big crappie as I released fish after fish.

After about 45 minutes I had hollered out something like 18 sunfish and a yellow perch when I paused to check on the scores.  Brooke reported Wynn had landed 16 crappies, and now I was even more confident that I was going to get smoked in this contest.   I had been catching fish almost non-stop every other minute and I was down by 30 points!

While distracted by the scoring deficit a nice 16″ largemouth put its nose on my fly and then pulled a frozen fish imitation, declining to inhale. I focused on that fish for a while, forgetting about the contest and switching flies but never getting him to eat.  Conceding just was not an option: I don’t have it in me.  I resolved to try to find a school of crappies of my own to try to close the gap and I tied on a small Woolly Bugger.

I landed a few more sunfish, followed by a nice 18″ pickerel that kept me smiling as we did battle on my light rod.  Two more crappies and  a yellow perch to hand made me want to keep putting the pressure on. I decided to get down and dirty and go back to my volume strategy, making my way over to an old beaver lodge and tied on a small bead-head nymph.  By positioning myself next to the abandoned abode, I started picking off little sunfish at the rate of about one per minute, reaching the high 30s with determination.  I hoped to rattle Wynn by calling out numbers constantly.  Just like during the week, he wasn’t listening as the darn kid was in a new spot and still picking off crappies and even a small bass. 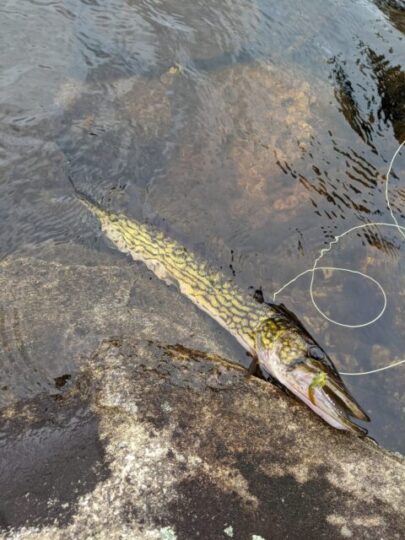 The second scoring update came in: I had closed the deficit to 11 points with 14 minutes left in the derby.  I switched to a little streamer and immediately got a six-inch bass that I could have kissed as I quickly removed the barbless hook.  I nailed a crappie, a perch and then another bass in quick succession to rack up 18 more points, but seemingly every time I released a fish I heard “crappie” get called out from across the lake.  Brooke was struggling to keep up. She could no longer score points as she frantically made scratch marks to record the fish caught.   With only four minutes left, I was four points down.

I had a hit from a yellow perch. Off1  A crappie took the fly and spit it. No dice!  Brooke called out: “The end!” I ultimately came up short with 65 points to Wynn’s 69.   I kept fishing, unable to turn off my competitive juices (and still having fun catching fish) and within four minutes I caught two yellow perch.  I reeled in and wondered whether to blame the loss on my overconfidence, the chivalry, or the vagaries of where schools of pre-spawn black crappies care to take up temporary residence.  Andrea had caught a few fish but ended up enjoying relaxing by the lake and trying to help Brooke track the dueling tallies. I still couldn’t quite grasp that I had landed over 40 fish in two hours and lost!

The truth is I was excited about this contest idea as soon as my wife brought it up.  Although I have always actively avoided counting fish for sport (competitive angling just strikes my relationship to the pastime as an oxymoron), I felt I would be happy no matter the outcome.  We’d be spending time outside together as a family.  If Wynn won, he would be boasting about it all week, and I would grouse externally and be secretly proud inside.   A victory by Andrea would advance the contagion of her fishing itch.  If I won, well, who doesn’t love coming out on top?

This evening I was reading about the somewhat revolting surge in spending on super yachts during the pandemic.  It appears Jeff Bezos’ newly commissioned super-sailing yacht will also be ordered with a support yacht. How else to accommodate the sails and the helipad?  I wondered who he would spend time with on the boat and if someone that rich would have time for spontaneous zero-stakes competitions with family.   I found myself feeling thankful for organically derived wholesome fun, spring days, and little panfish. 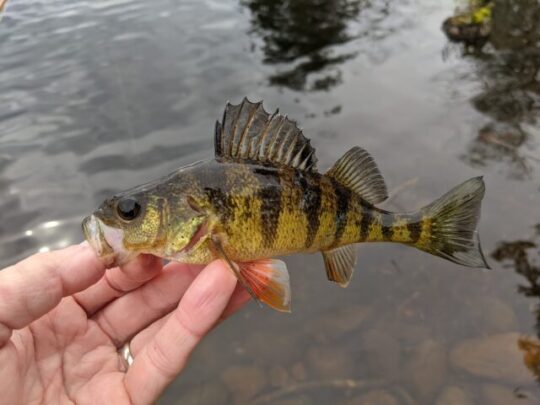