Last month I reconnected with my friend Anna. We were both part of the same lab group in grad school and both enjoyed fly fishing. Besides a couple of small local excursions, we never went on any day-long excursions. That’s why when she expressed interest in meeting up and fishing, I immediately obliged.

Since she moved to the mid-Atlantic a little over a year before I did, Anna knew more about the fishing opportunities. At her suggestion, we fished a delayed-harvest stretch where she’d had success before. It’s a short stretch of river, not more than two miles long and fairly high gradient with a bottom-release dam. At the head of that stretch is an incredibly deep pool. We decided to start there since it was the closest spot and it cried of big-fish potential.

I set her up with a deep nymphing rig and had her work the tailout. After a few drifts, it was apparent that her fly wasn’t getting deep enough so I added an 18-inch dropper off the bend of the point fly. Almost as soon as her drift began, Anna’s indicator dove for the bottom and a feisty rainbow trout soon flopped into the net. After releasing her fish, Anna suggested that I get on the board and I happily agreed. I crossed over to the other side and quickly got on the board. 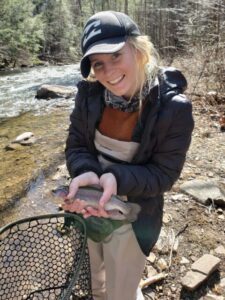 After catching a few smaller rainbows, the bite slowed down at the first pool and we decided to explore further downstream. We continued having success, catching rainbows while tightlining and indicator nymphing.

At one bend pool, we caught fish almost every other drift while floating the ol’ bobber. The water was so clear there that we saw many takes before the indicator even moved. At one point, we traded off after each fish. During one of my turns, I hooked something big. After a spirited fight, I admired a beautiful holdover ‘bow in all its glory. 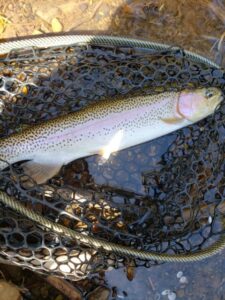 Not long after landing that fish, we decided to call it in favor of some lunch and cold brews.

There are some days you can just rack up the numbers, and that was one of those days. But sometimes, just sharing some moments with a good friend is enough. Anna hadn’t fished for six months and I hadn’t fished with anyone since my move. As far as I cared, it wouldn’t have made a difference whether we caught 40 fish or just four.

That’s what it’s all about, isn’t it?

2 thoughts on “A Long Time Coming”