This at times bizarre 1973 film is referenced in “Lords of the Fly” by Monte Burke, released in 2020.

“As the tarpon neared, he made one long, slow strip of the line. The fish veered toward the fly, engulfed it, and leapt, its body lurching completely out of the water, before crashing back in. It was, as Huff would later recall, as if someone had dropped a Steinway piano into the ocean from a helicopter.” Burke, Monte. Lords of the Fly: Madness, Obsession and the Hunt for the World-Record Tarpon. Pegasus Books, 2020. 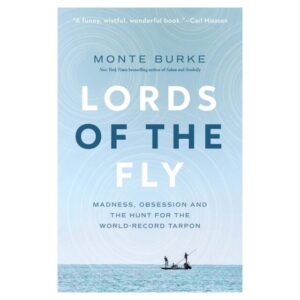 You may have already heard about the recently released book, “Lords of the Fly: Madness, Obsession and the Hunt for the World-Record Tarpon” by Monte Burke.

It was featured on a September 2020 Orvis podcast, a Sports Illustrated Daily Cover throwback (below), and in the book review section of The Wall Street Journal.

While plenty of fly fishing books are released every year, few if any receive mainstream coverage from the likes of SI and WSJ. If you haven’t picked up your virtual copy from the library or a glossy new hardcover edition, this review may spur you into action.

Monte Burke has written two other books on fishing, one of which is also a book about chasing records (largemouth bass). “Lords of the Fly” is ultimately about establishing new records and beating existing records in the world of tarpon fishing.

The primary setting is Homosassa, north of Tampa, as well as the Florida Keys. The key characters are client Tom Evans and guide Steve Huff; however, numerous (mostly) men come and go over the course of the story, including many saltwater fly fishing legends.

I’ve screen-shot the current male and female records below, and you can access details and history at IGFA.org. Little did I know that there are separate records for 2 lb., 4 lb., and 6 lb. tippet strengths.

If you want to hear a thoughtful interview with Nathaniel Linville of The Angling Company and learn how the heck he landed a 140-lb. fish on 6 lb. test last year, check out Mill House podcast. Read his blog post of the record catch here.

Back to the book – I’d rather not ruin the story for you, as each reader will take something different from the 274 pages of this book. I will say that it is superlative in its research, interviews, and writing. By reading it, you will become versed in the nuances of IGFA standards and certifications as well as the changing ecology of Florida, not to mention the history of sport-fishing for “the silver king.”

I learned about the special leader formulas for IGFA records, Homosassa watercolors by Winslow Homer, and the collateral damage that can result from becoming hellbent on beating sport-fishing records.

A few themes that I’ll touch on – the transition from 12 lb. to 16 lb. tippet, Ted Williams, and Tibor reels:

After putting down this book, I flip-flopped between an accelerated desire to challenge myself in the high stakes game of targeting giant tarpon and an aversion to the hyper competitive crowded scene of Florida Keys flats fishing.

I also struggled with the simultaneous urges of conservation and recreation as Megalops atlanticus is officially labeled as a “vulnerable” species with a decreasing population by the International Union for Conservation of Nature and Natural Resources.

Regardless, I’ve certainly become more conscious of what it means to contribute to the increased pressuring of Atlantic tarpon, but am optimistic that informed decisions by anglers and support from organizations like Bonefish & Tarpon Trust will help.

In fact, there’s only one legal way in Florida to kill a tarpon or take a tarpon over 40 inches out of the water – by purchasing a “Tarpon Tag” for $51.50. This enables you to bring the fish into your vessel so that it is thus “retained for potential IGFA record” (sourced from the Florida Saltwater Recreational Fishing Regulations). Clearly, Florida recognizes that the tarpon must be conserved, but that there are still those among us on the quest to get their names atop the leader board.

It’s going to be a while before another fly fishing book enters the mainstream like “Lords of the Fly” has. I encourage you to experience it and let me know what your thoughts are.