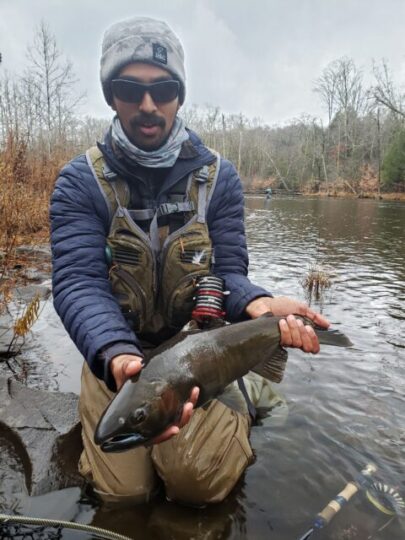 Three-and-a-half days, 1000+ casts, a handful of hookups, and some truly big fish brought to the net.

That is the epitome of steelhead fishing for many who venture to the Salmon River. For years, I had been avoiding the long drive. However, with a nascent interest in big fish, the siren call was unavoidable.

I felt fortunate to join my friends Rob, Phil, and Griff from Trout Unlimited’s Youth Trout Camp. 2020 gave me an opportunity to reconnect with these great friends and it felt fitting to share this experience with them. Plus, Phil and Griff had some prior experience at the Salmon while Rob and I were complete neophytes.

The first two days of the trip went exactly as expected. I cast many times, changed flies frequently, and of course lost some flies. I felt myself losing steam and my sanity dwindling. However, I learned a lot and after sticking with the program, I was soon rewarded with some nice fish including my first ever Coho.

Here are some lessons I learned.

Fish where the fish are
Okay, this sounds almost too obvious, but I feel like it’s worth mentioning. One of the biggest lessons I learned early on is that steelhead are not like trout. They enter the river in the fall to feed on eggs and flesh and then to spawn. While they will move through a lot of the shallow “B” water, they will usually hold and rest in “A” water. This ranges from the more popular pools to slower, deeper pockets in the middle of long, white water stretches. This is where you’ll find the most fish, and as a result have a better chance at a hookup.

Trust your fly
One of the biggest mistakes that I made early on is that I rotated flies way too often. That is often par for the course when I don’t know a fishery and thus have no confidence in a particular pattern. However, I found that flies that I discounted early often produced for my other friends. An experienced steelheader with whom I spoke at the Upper Fly Zone told me that he fishes a fly for at least 20 minutes before switching. I tried that approach for a while at a spot he told me held many fish before hooking my first steelhead. Presentation beats pattern like a rock beats scissors.

Fishing is best when fish are moving
It’s no happy accident that the best days of steelhead fishing happen on the worst fishing days. A sudden rise in flows from heavy rain or a dam release drives up fresh fish from the lake, which in turn increases the probability that you’ll hook fish. 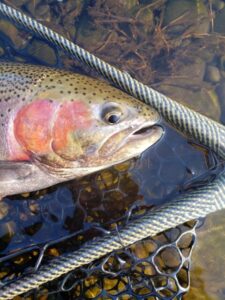 I was fishing a narrow, deep section of rapids between two major pools during a downpour. Not even five minutes after I arrived, I landed a small brown trout. In a span of 20 minutes, I went two-for-three with two steelhead hooked. I also saw two spin fishermen across from me hook multiple fish.

Add more weight
Again, another obvious but overlooked tidbit. The old adage of what separates a good from a great nymph fisherman applies to steelhead, more so than for trout. At one spot, for example, I knew the fish were there. However, drift after drift produced nothing. I felt the sighter straighten after each tuck cast drove the flies into the water but I felt each drift going by quicker than anticipated. I decided then to add split shot off a tag in my leader. Two casts later, I hooked and landed a beautiful chrome steelie. It’s the little things, they say.

Once I learned these lessons, I found myself having better success on the Salmon over the last day and a half of my trip. Of course, I have more to learn along the way, but that’s part of the fun. All I know is, I couldn’t have asked for a better welcome to the Salmon River and its world class fishing opportunities. 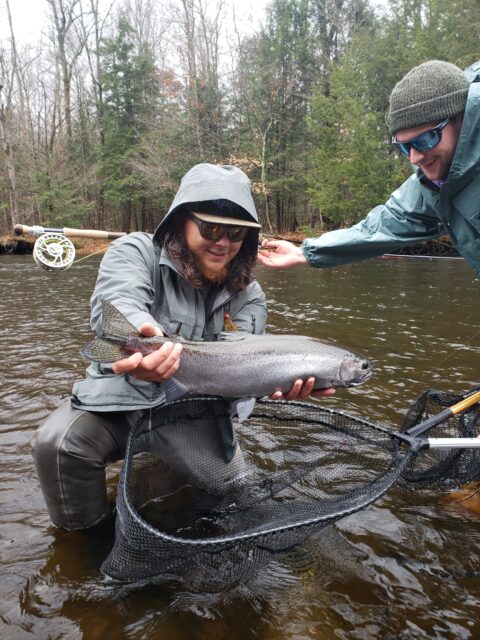