Fellow blog writer Ashu Rao and I had made last minute plans to fish for false albacore in Vineyard Sound out of a boat with a guide. The challenge of hooking finicky “hard tails” like bonito and false albacore that prefer warmer water temperatures than striped bass has led to their being nicknamed “funny fish.” Neither of us had ever fished for, let alone seen, one. I was excited and nervous, knowing this trip wouldn’t be easy and kept my expectations in check.

I pulled into the public parking lot next to the Tides Motel of Falmouth just after 6:30 am. It was the first Saturday in October, with calm seas, light winds, sunny, and temperatures in the 50s. I drank the rest of a caffeinated soda to wake me up and put on all the clothing I had, knowing it would be chilly in the boat.

I leaned the rods against the car with my Sportsman Bumper,  a critical piece of gear for easing transitions in and out of vehicles. Any angler with a driver’s license knows the risk of breaking rods in car doors, windows, and lift gates. This magnetized rubber makes the experience worry free. It’s my top must-have gear recommendation.

For tackle, I brought a made-in-the-USA St. Croix Imperial Salt #9. If you’re looking for a USA saltwater fly rod, this is an outstanding choice at a great price point. I had borrowed an Orvis Battenkill IV reel with new-generation Orvis Depth Charge 300-gram sinking line on it.

Thankfully, I had tested out this setup the night before on grass. Sure enough, the welded loop had failed. I had clipped off the frayed end and tied a new Perfection Loop, shuddering to think about the fish I may have lost if I hadn’t tested out the gear the night before. My terminal tackle was four feet of straight 16-lb. fluorocarbon with another perfection loop. The fly was an Albie Whore tied with a clinch knot that I had purchased at Concord Outfitters and never had the chance to use.

Soon enough, Captain John Schillinger of Little Tunny Charters pulled up to the dock. We motored out past the jetty and headed southwest towards the Elizabeth Islands. Just off Woods Hole, we saw something strange in the water. Getting closer, we were shocked to see a gargantuan deceased leatherback sea turtle. It floated on the surface with a yellow tag by its head. I later learned that the leatherback is the largest turtle on earth weighing anywhere from 500 to 1500 pounds. I had brought my point-and-shoot and took some photos. The image I’ll share, while not gory, may be upsetting to some, so I’ve chosen to host it externally. If you would like to see it, you can click here.

At the northeastern tip of Naushon Island, 10 motorboats and a few intrepid kayakers bobbed around, hunting for albies. John, a resident of Martha’s Vineyard for more than three decades, didn’t find the spot enticing enough, and we kept moving. Soon enough, we saw periodic splashes of false albacore, also known as albies or little tunny.

Another group of more than a dozen powerboats tracked a large school making its way down the coast. John estimated that a third of these boats were competing in the annual Martha’s Vineyard Striped Bass and Bluefish Derby. Due to new slot limits this year, striped bass were not included in the competition.

I had early shots at single fish, but it was not easy to cast 50 to 60 feet of sinking line at a moment’s notice and immediately begin stripping, especially with a hampered stripping arm. All of a sudden, the larger school we had been tracking arrived on the port side, and John positioned me so that I could make a 10 o’clock cast into the splashing frenzy. I made my best long cast, and the line mercifully laid out straight. Rather than putting the rod under my arm for a two handed strip, which would have delayed the movement of the fly by a few seconds, I immediately stripped with my left hand and got a fish on.

The 15 minute fight was the longest I’ve ever had; the tuna took me into my backing twice, something I’d never experienced. At one point the fish was directly below the boat in 80 feet of water. The Orvis reel was not a large arbor reel, which didn’t help me out when it came time to take in line.

But I kept my cool and never yanked on the fish and the fly held. We landed it, took some photos, then launched it back into the water. John estimated it at 26 inches and 8.5 pounds, slightly above average size. This was the most satisfying fish of my life, and I elbow bumped John and thanked him. I halfheartedly made some other casts, as by this time my arm was hurting and I didn’t have the burning desire to hook up again. The only other boat we saw get tight was a fly angler who was by himself and blindcasting.

On the way back, John took us to a secret spot where captains have historically had good luck blind casting even though there were no telltale splashes around. Sure enough, we got another fish, and Ashu landed his first albie. This made for a joyous cruise back to the dock. I called it a day and headed home, but Ashu kept fishing from shore and did well, hooking another false albacore as well as other species.

I was surprised at how difficult it was to catch an albie when tracking a moving school: the challenge of having the boat driver get you in line, then making an accurate long cast with sinking line, and getting immediate action on the fly. I can’t wait to do it again, though. Here’s the contact information for John, call him up and he’ll set you up for success. 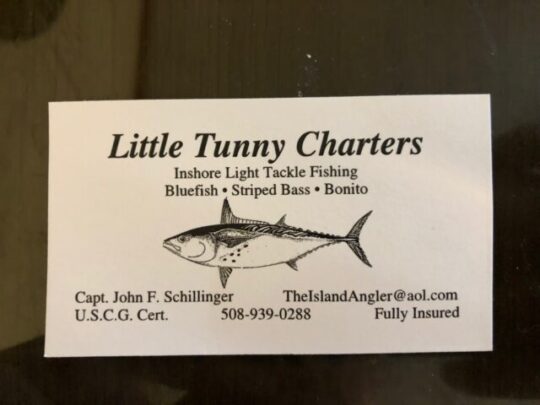