We had a short camping and fishing trip planned for this fall.  This one was special as it would be the first time my newly nine-year-old daughter Brooke and I would be out on our own together for a few days.

We are lucky to have a great family unit, but I feel that one-on-one time with a child is important in helping them show their true personality. The daily tide of a family is a pretty big wave that easily washes over a nine year-old’s desires and feelings.  Making time to be together also strengthens the bond in a peer-to-peer way that is difficult to do within the parent-child relationship that dominates at home. 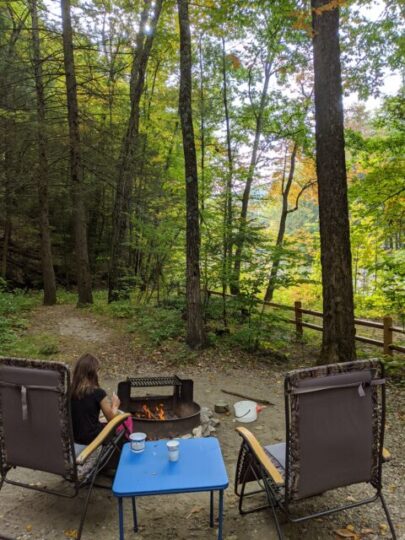 We notified Brooke’s teacher that her remote work for the next two days would be delayed and finished loading up the car.  As we were heading out during an extended dry period lacking rain, we were not sure what would await us, and I was making backup plans that it would be a camping and hiking trip as opposed to camping and fishing.  Brooke kept a running count of how many times I said something to the effect of “Wow, that looks really low” (13 occasions).

We developed a sort of grey ethical judgement for eyeballing a stream where we may have caught fish but wouldn’t feel good about giving them another obstacle to their survival.  We skipped places that looked like the flow was too low and fish might be stressed.  After having a fish eke out a living over the dry summer we would not have felt good about it.  We avoided many of the smaller tributaries we normally haunt, so there will be fish there next year.  We also found a few streams with good-sized watersheds that were flowing clear and cold and had a good amount of water. 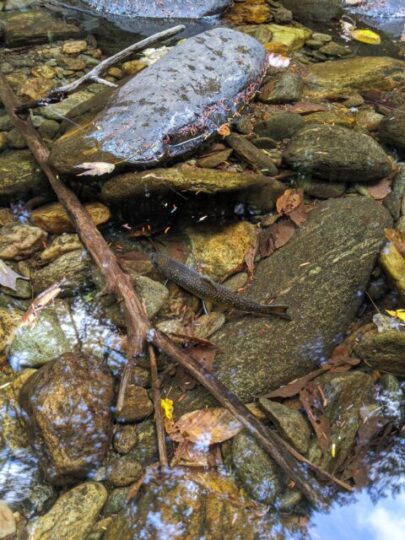 We spent a few pleasant afternoons hiking into forest tracts to explore high-gradient boulder gardens hiding deep shady pools.  It was amusing that we would almost always choose a different way to navigate the rocks.  My long legs would go one direction while her agility and energy led her to climb right over many car-sized boulders. 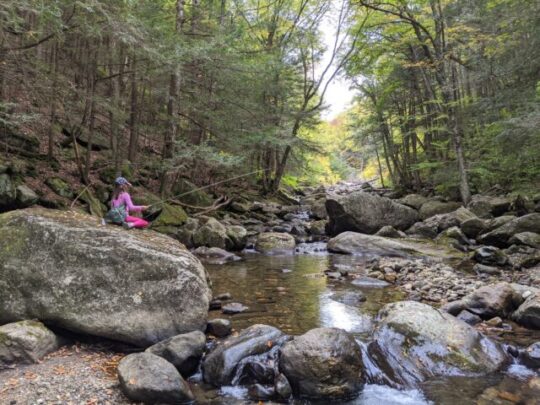 We spent one afternoon at Fife Brook Dam on the Deerfield River; the low flows made it an area we could fish safely.  We talked to three anglers who had not seemed to have any success so our expectations were low.  We spotted a few sporadic rises tight to the bank, and Brooke crept into position, her small profile hidden easily by the bank-side grass.  She worked her line out and laid out a nice upstream cast.

A very large head broke the surface to inhale her small Caddis dry, the tail of the fish showing about a foot and half behind the head.  I gasped.  Brooke set the hook but came up empty. 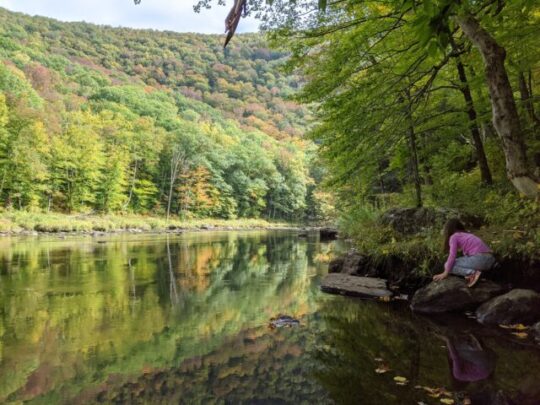 We sat down and made sandwiches on the riverbank.  I eventually hooked a big rainbow that turned and leapt from the water, heading downstream and making my reel scream.  It’s remarkable how you can fish for an hour and then get a take, only to blow the whole thing in the first few seconds of the fight when a fish takes you by surprise.  The strength of the river pushed on the fly line and broke the fine tippet.  I reeled up the fly-less line, and we headed out. 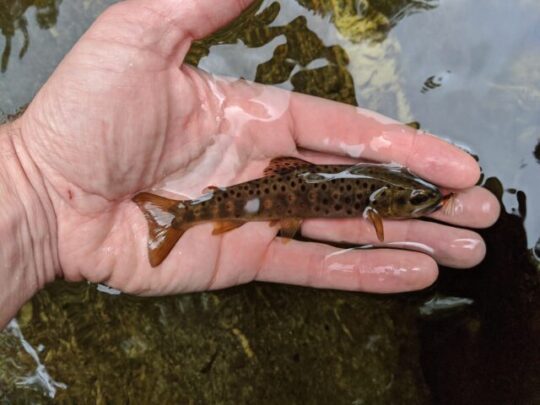 The cool fall air would lead us to linger in the mornings, holding the idyll of vacation as closely as the warmth in our sleeping bags.  While chatting, we discovered that dad had dreamed of a jumping rainbow trout while daughter had dreamed of jumping horses.  Although we have many differences, our shared time restored our faith that we can definitely have a lot of fun together.  I think time spent in nature helps the positive mood thrive.

I asked Brooke what she liked most about the trip, and here are her thoughts:  “I liked making fires.  I liked sitting by the fire and eating steak.  I thought we would argue more.  Another thing I liked was adventuring on big rocks. I enjoyed catching the biggest brook trout on the trip, bigger even than my Dad’s biggest fish. I like eating beef jerky with daddy too, at least when I shared some with him…. It was FUN!!!” 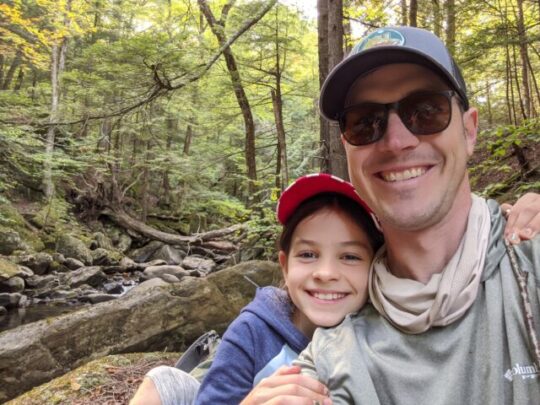