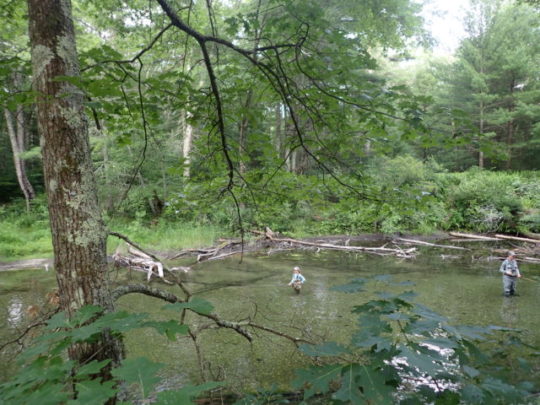 My wife was spending Saturday on her own with some well-deserved time at the beach.  Having recently done well fishing in the evening at the Swift River, I decided to give in to the kids’ demands for an evening trip to the Swift.

I usually don’t take both of them on my own.  There are many reasons, one of which is safety, and the other is sanity.  But, my daughter Brooke is eight and my son Wynn is now pretty independent and a fishy 11.

So, I said: “Sure, why not?”  This would be the first time taking both kids to the “Big League” water upstream of Route 9 near the Y Pool.

We tied some flies and notched plenty of screen time during the heat of the day.  I came up with a dad-ly dinner of pasta and sauce while the kids made fluffernutter sandwiches for them and a PB&J for me for the ride home (fun fact: peanut butter and marshmallow fluff is actually healthier than PB&J!).

We arrived in the evening and found a fishy spot in between the moderate crowds.  Easing into the cold water we were greeted by a few trout sipping on Sulphurs.  These trout proved tricky for Brooke and me, as they would lazily refuse our Caddis and Sulphur patterns.  It made for entertaining but frustrating fishing.

Wynn was throwing a large foam creation he had tied earlier in the day.  Instructions for it would not be found in any magazine.  I try to encourage their creative fly tying, but I had several suggestions for improvements on his new foam friend.

I recall reading an article a long while back that one way to increase your catch rate was to make sure that you are not “borin’ ’em” by showing fish flies they have seen many times before (if anyone has an insight as to whom I can credit that, please let me know).  Whereas these Swift River inhabitants would have seen plenty of Sulphurs and Caddis dries and nymphs, we can say with certainty that Wynn’s fly would not be “borin’ ’em.”

Friendly anglers walking the trail seemed to appreciate the kids’ efforts, and many gave them encouragement.  I proudly reported that the kids were getting as many refusals as I was, when Wynn cracked up a passerby by bragging back “Oh no, I’ve gotten more refusals!”

As it happens, he backed it up and struck first.  He landed a hefty rainbow that was unnaturally thick and deep bodied.  Wynn curled my waders a bit by reporting that it swam up and over a log to slurp in his fly! 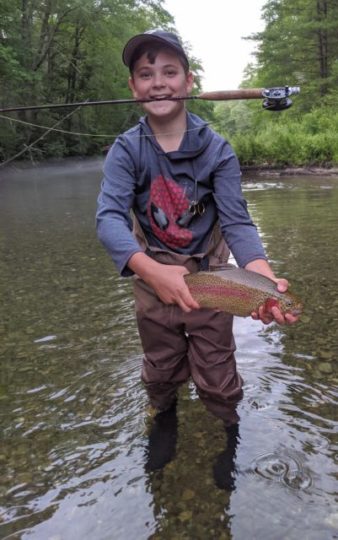 We got a report that they Y Pool was wide open, and, so, we headed up to try our luck there.  It turned out that one of the anglers up at the Y was Joe Drake, fellow blog team member, live in the flesh.

I was slightly embarrassed that I hadn’t recognized him as a friendly angler that had kindly pointed out a big rainbow for Wynn to cast to.  In a dose of the real world on the river, we hadn’t seen each other in over a year.  I had grown out my attempt at a beard during the pandemic, while Joe had done the opposite and traded in his facial hair for what his wife calls his “baby face.”

Wynn waltzed up to the Y Pool and took a nice rainbow on his first cast.  He even declined the net and the paparazzi, as I made a mental note to stop giving him any tips.  Brooke stuck with me as I tried to catch up a little with Joe and keep an eye on the kids.  I managed to land a fish or two myself.  Brooke was pleased to serve as a personal photographer with her new hand-me-down digital camera.   “Did you get me in any of the pictures?,” I asked her.  “Not really,” she replied.


As it started to get dark, we focused on getting Brooke a fish.  The Y Pool rainbows had recently been gobbling the Sulphur comparaduns I had refined for just this set of circumstances.  Brooke stuck a nice fish after a good drift, but it promptly broke off the 7x tippet when she “buttoned down” in her excitement and didn’t give it any line.

I tied on another fly, and, a few casts later, she had another fish on, bringing it in while I nervously made sure to net it on the first try.  We whooped, and I tried to take a picture in the near dark, while Brooke let the fish go quickly.  “I don’t think I got a picture of you with the fish,” I said in what was probably a slightly deflated voice.  Brooke flipped the parent-child dynamic by replying, “Well, it still doesn’t change the accomplishment.”  Yes, dear. 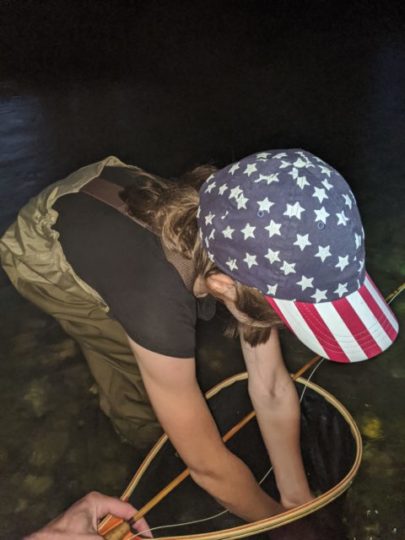 The friendly crowd at the Y Pool cheered her on and boosted her confidence as my pride swelled. We heard one say, “I know a lot of guys that can’t say they caught one at the Y Pool.”  She took a few more casts and missed a take or two. It was hard to tell in the fading light.

We headed out after dark and talked fishing as our headlamps illuminated the path back towards the car.   The sandwiches were warm and hit the spot on the drive home.

BACK AGAIN ON SUNDAY
Wouldn’t you know,  we found ourselves back at the river again the next day on Sunday evening, this time as a family of four acceding to the requests from the kids.  In a scene that would prove telling for our efforts, on the walk in, we observed a rainbow trout tip up to take a natural sulphur on the water.  Too timid with his take, the mayfly actually bounced off and fluttered along downstream.  Many other fish would pretty much do the same with our artificial Sulphur patterns.


Wynn had tied up a few more of his “Indomitable Stoneflies” (family tradition holds that once you catch fish on a fly you created you get to name the pattern). To my eye, the hooks were too large, and the foam was not enough to float the hook.  Flies are not judged by other anglers though, they are judged by fish.

The fish once again were not bored with Wynn’s fly.  He got more takes than the rest of us put together and landed two more fat rainbows while the rest of us were devoid of photo ops.  Brooke continued to make use of her camera. 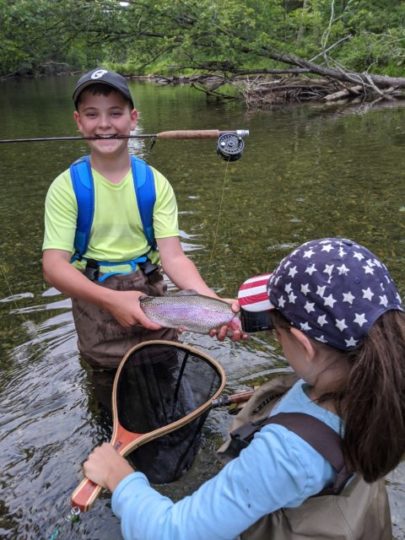 My wife likes to fish, but I refer to her as a normal person, who also fishes.  By that, I mean she gets hungry on the river, takes breaks to enjoy the scenery, and does not get obsessed by the pursuit like my son and I do.

She observes anglers and makes funny comments about who seems to be there for fashion and who “has a dry net on their back.” She made some good drifts but also walked around and was entertained by our efforts.

I think I was more proud of Brooke on Sunday than Saturday, as she cast well and fished earnestly the entire time, pausing only to film a family of ducks feeding in the river that came in close range.  When I waded over to her in the dark and told her it was time to wrap up, she made me smile when she complained about leaving.

I think we might be getting Brooke over to our side.