We live in a hyper-sensitive world, or so it seems.  And, so, a bit of careful thought about word choice can make all the difference between connecting in a meaningful way or shutting down conversation altogether.

Furthermore, some time spent considering a different perspective or point of view is always beneficial for testing and evaluating your own position.  I see it so often on the modern stage; passionate people who demand agreement and get frustrated when their audience doesn’t “buy it now.” I am reminded of a quote that I find particularly relevant today:

Once you’ve cut off a person’s nose, there’s no point in giving him a rose to smell,” Ravi Zacharias

By this point, you may have identified the fishing nexus: we make the same mistakes as anglers. We present ourselves as clumsy intruders to the trout’s world without considering the trout’s perspective. We fire off fly patterns at them and expect them to eat. When it it doesn’t work, we blame the fly. I am reminded of another quote….

It’s not the fly, you suck,” Author unknown,  seen on a decal on the back of George Daniel’s truck 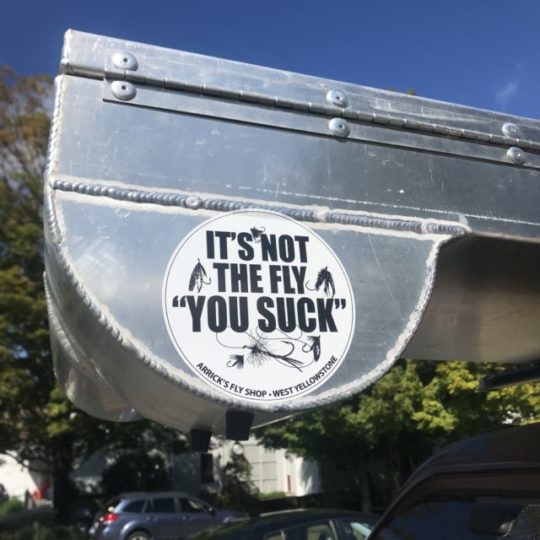 We can get away with sloppy or forceful approaches at times on the water, and I enjoy catching fish, but I find more satisfaction in tackling situations that require a bit more thought and planning.

I consider approach from two angles: my physical approach to the fish and the presentation of the fly.

There’s a wealth of good information available in published books, videos and web content. So, rather than reiterating the common basics of approach (wear drab colors, move carefully, fish longer/lighter, etc.), I’d rather focus on how I put them together to work for me on my home water, which normally experiences a lot of angling pressure. The fish there become accustomed to the presence of anglers, but the real quarry (the larger, wild fish) keeps me humble.

PHYSICAL APPROACH
The most basic and the most important improvement I made was the easiest.  Herons are everywhere on my home water, and they’re a constant reminder of how to approach effectively. Wade slowly and step carefully, so as not to lose balance, stumble, and cause commotion.

Keep a low profile. Who knows how many fish we spook while moving into position and what domino effect that may have on other fish in the area? So many times, when prospecting new areas, I’ve found myself standing in the water I should have been casting into, whether it be a depression or bit of deeper water that wasn’t initially noticed.

This is generally the result of wandering about too quickly without a clear plan. One doesn’t need intimate knowledge of a river to take a moment, observe, and think about what one sees.

Recently, while I was suiting up in a small parking area, another angler pulled in and parked right next to me.  A bit close, I thought, especially given the circumstances of the pandemic, but by now I’ve accepted the reality of the crowded river.

I’m not thrilled about the crowds per se, but the added pressure no doubt forces me to be a better angler, and that’s a good thing.  We soon struck up a pleasant conversation during which I shared some info and determined we wouldn’t be competing for the same water. I’ve been the appreciative beneficiary of helpful advice in the past, so I’m glad to do the same when the opportunity arises.

Since I arrived first, he graciously let me head down the path to the water first. I suggested we walk in together, but, the next time I saw him, he crossed the river upstream of me and trampled through the riffle I intended to fish with all the grace of a herd of buffalo. Oh, well, it happens. There’s no point in letting it bother you, but it’s a reminder to spend a moment on the bank, surveying the water, and planning your route.

I use a particular stretch of confidence water as a training ground because it has a variety of water types that present different challenges. It’s taken a few years and a lot of trial and error to learn the ins-and-outs of a spot like this: the buckets and depressions, the feeding lies that will produce fish consistently.  Accordingly, it’s a great spot for me to validate technique. Yet, as familiar as I am, there’s always more to learn. The goal is not to just fish this one stretch more effectively, but to apply those lessons to fish the entire river more effectively.

PRESENTATION
This season, I’ve applied “crossover” techniques with good success. Essentially, I use one rod but carry different line and leader options allowing me to vary the range of my presentation from the rod tip out to about 75 feet. I could bring two rods, maybe a nymph rod and a dry fly rod, but that requires more movement, and more opportunities to spook fish.

If I can re-rig quickly and painlessly on the water, that’s the best and most practical scenario. For the sake of brevity, I won’t go into detail as to how I change rigs or leader composition, etc., other than to say that an efficient system is critical to bridging the gap between the theory of having options and actually employing them.

I work solutions to these problems out on my training ground water as well. One general rule I follow is that I don’t like to give up ground that I’ve gained. Often, it takes me a bit of time to wade into position carefully, so the idea of wading to shore and then walking a 100 yards to get my spare rod becomes less appealing. It’s really nice to have options and it’s even better to use them.

That said, all of the effort taken to maneuver into position is for naught if you can’t deliver the fly effectively.  I’ll occasionally do a backyard casting session but there’s no substitute for casting on the water, especially with light nymphing leaders that require a water haul to load the rod. Even lousy golfers go to the driving range (I speak from experience).

There’s no substitute for a good first impression and the same principle holds true on the water.  I’ll usually warm-up a bit before moving into position to fish. If I’m nymphing, I want to check my drift as well, so I put the warm-up casts in similar current to my target. I’ll sometimes conclude a trip to the river with a bit of casting practice to work on accuracy. Sometimes I spend hours doing this. At least, that’s what I tell everyone when I don’t catch anything….

POWER OF OBSERVATION AND A FISH STORY
When I’m focused solely on nymphing, I’ve noticed how my situational awareness can suffer to the point of tunnel vision. I stare intently at my sighter on drift after drift to the point that it’s easy to miss the rise forms that signal a change in the feeding pattern of the fish, or, even better, signal the feeding lie of a large trout.

Avoid tunnel vision by taking a moment to observe now and again and then make adjustments based on what you see. You might try a simple adjustment like letting your flies swing at the end of the drift, or you may choose to re-rig completely.

I recently spotted a large brown feeding on emergers downstream of me on two separate occasions while nymphing.  The fish was “off the beaten path,” so to speak, in water that I don’t typically drift a nymph through. Rather than move down past the fish and attempt to get within tightline nymphing range, I opted to change my rig to allow for a long downstream presentation. I wasn’t able to get the fish to eat, but I became familiar with the lie and the associated currents by watching the drift of my fly.

On my third trip, I targeted the area deliberately with a nymph. Not seeing any indication of surface feeding, I approached from downstream, rigged with a micro-thin European nymphing leader. On the business end I attached a single, size 18 perdigon with 2.5 mm tungsten bead on a long 6x tippet.

The fly is one of my confidence patterns and, without the influence of a dropper, I knew I would get the best drift possible in the relatively shallow water– the best of physical and psychology advantages, I thought.

A few drifts later, I set the hook on a subtle take. As often happens, I couldn’t tell you whether I saw the take or felt it, but I was tight to a good fish. After a bit of maneuvering to keep the fish above me, I soon slid a big, presumably wild brown into the net. Disclaimer: declaring a fish wild can sometimes cause debate. I’m no marine biologist, but I once removed a Titleist from the blow hole of a beached whale.

Finally, a note on camouflage because there’s a lot of camo clothing marketed to anglers, and it’s relevant to the discussion of stealth in the approach.  When Simms released their River Camo a few years ago, I chuckled at the idea of fishing for trout while dressed up like the Spetsnaz.

I wore camouflage almost daily for 25 years professionally, and, so, the idea of wearing it for leisure activities didn’t have quite the appeal for me that Simms likely intended.

However, I do understand how camouflage works, and, it’s not so much that it blends in with the surroundings, as much as it breaks up your silhouette. There are no horizontal straight lines in nature and few vertical straight lines. If you look around in the forest or at the river, look for a horizontal straight line and if you find one, it’s probably man-made and not natural. Either way, your eye is sure to pick it out quickly.

If camo works better than plain drab clothing, it’s likely for this reason, and I’m sure it offers an edge at times. But, in order to catch fish, you have to get everything else right; getting into position and presenting the fly.

Now is a great time to get out on our New England streams and work on refining your approach. For waters with safe temperatures, the fish are spread out everywhere and present an opportunity to catch them at some less conspicuous lies or with a variety of methods. You can target them either in new water or on a confidence stretch as I have described.

And, here’s a final thought: couldn’t the most vocal in our society stand to learn a few lessons on the water?

8 thoughts on “Consider Your Approach”