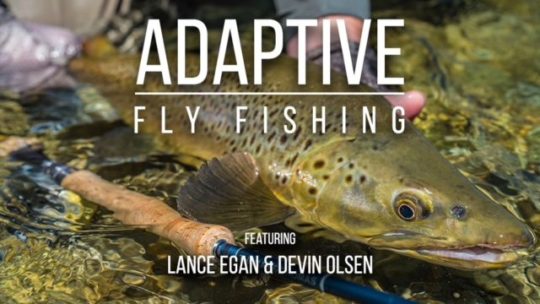 We’re very happy to welcome back to the team Damon Matus, who had to focus on an important family matter. Great to see you again, Big D!

Their original film, Modern Nymphing, focused on European-nymphing techniques. I considered it invaluable in providing a visual demonstration to accompany the volumes of written instruction available on the subject.  In fact, I considered it so valuable, that when taking a good friend out nymphing for the first time, I had him watch the film on the way to the river, a move which shortened the learning curve considerably.

Inspired by their background as competition anglers, Devin and Lance discuss techniques, from single dry flies to nymphs and streamers, as well as deploying a combination of methods to get the most of out of each water-type and situational variable.

The case studies demonstrate the versatility of European-inspired leaders and while it’s not a dedicated nymphing tutorial, it provides great examples of how variations of the long “Euro” leader can adapt to a wide array of situations and water types.

I’ve made this sort of adaptability my personal goal for development as an angler for a variety of reasons: it keeps the sport interesting by raising the bar, opens the door to opportunities for more and better fish, and helps make the most out of a stretch of water.

My home river is highly pressured and, lately, I don’t have the luxury of unlimited time on the water. Therefore, getting the most out of a few hours of fishing, defined in terms of catch quality or lessons learned, becomes my paramount goal.

To that end, I found the film to be an insightful motivation to cover water more thoroughly and effectively with several noteworthy take-aways that I’ve applied successfully over the last few months.

I think it’s safe to say the film has something to offer anglers of all skill levels. For the inexperienced, the case studies can help identify and understand water types, while experienced anglers will likely pick up something to help them refine or rethink their approach and in turn, as the title suggests, be more adaptive.