This winter has been unusual to say the least. Over the last week or so, it has felt more like spring than mid-winter. Although I could always count on the rare warm winter day every year, it seems to be more commonplace nowadays. The fact that Connecticut already started stocking fish seems to confirm something is out of the ordinary.

My most recent outing was entirely unplanned. I was sick as a dog for much of last week and confined to the house on Saturday. Luckily, my cold somewhat subsided by Sunday and decided I needed some air. Never one to let an opportunity pass, I visited a local spot I fished last fall. 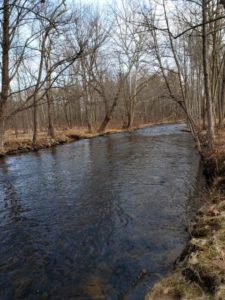 There was barely any shelf ice remaining from early winter and the water was low and clear. I started at the tail-out of a productive run that I know to hold fish. To my surprise, I actually spotted a pod of browns and ‘bows feeding semi-actively.

Carefully, I crept into casting position and made some drifts over them. Fortunately, it didn’t take long before I was tight on a fish. I went three-of-four before the the action stopped. I half-heartedly fished a few more spots without much success before calling it a day.

Overall, It was a bit of a bittersweet moment. As much as I enjoy opportunities to fish during the winter, I found asking: at what cost? The increasingly unpredictable weather and frequent warm spells can’t be good for the fish. Trout are cold water fish after all. Without a snow pack, it seems like it may be another tough summer for them. Let’s hope that things turn around soon.