I have been fly fishing for nearly 20 years and, until recently, I had never cast a bamboo rod.  This is intentional, and there’s a distinct reason.

I was fully expecting that once I did so, the percentage play was that I would be fully engaged from that point forward.  Bamboo was simply was not a good fit for my wallet or the clambering kids that I usually have with me.  Recently the dam broke, saddling me with a case of “bamboo fever.”

This is something that has been percolating for a long time.  John Gierach’s anecdotes served as regular inoculations about the beauty and character of his bamboo rods.  I’ve always felt connected to my fly rods, appreciating the form and function of the graphite and how it helped me to catch fish in an enjoyable way.  Bamboo feels like it has the potential to add on to all the great things about fly fishing.

I found myself at Rick Taupier’s Swift River Fly Fishing shop in New Salem, MA, on a recent Saturday morning.  Rick has a neat outbuilding on his property that smells of new wood and old varnish.  After retiring from teaching at UMass and a career in environmental policy, this shop arose as a natural outlet to help finance his bamboo rod collection and fishing adventures.  Right away,

I could tell that we were going to have a lot to talk about.  I am sure that our meandering fishing conversation was one of many that had echoed off the handmade wooden canoes, nets, and bamboo rods in the shop.

I had been doing my homework for the past several months, having read some helpful books such as George Black’s Casting a Spell, John Gierach’s Fishing with Bamboo, and Ed Engle’s Splitting Cane.

Each evening, I would peruse online rod listings and descriptions, learning about makers, tapers, ferrules and varnish.  I had bid on and missed out on several rods, making sure to bid on the conservative side to try and avoid an early misstep as I gained knowledge. I kept revisiting one rod in particular on Rick’s website: a two-piece 7’6” four-weight rod made by Gene Edwards with the singular and unexplained inscription “Rainbow.”

The Edwards family are main characters in the narrative of bamboo rod making history, which finds its roots in American ingenuity and persistence.  Eustis Edwards worked with the early rod building pioneer Hiram Leonard, founder of The Leonard Rod Company.

Edwards has ties to many innovations that would define what was to become the modern fly rod.  Eustis eventually struck out on his own, eventually mentoring his two sons, Bill and Eugene, who shared their father’s talent for fine workmanship.

Bill would go on to develop a four-sided “Quadrate” bamboo rod, a powerful casting tool that is still highly sought after.  Gene’s early work is nearly indistinguishable from his more famous father, and he continued to turn out high quality rods from the 1930s through the 1950s.

I felt nervous and a little giddy when Rick handed me a bamboo rod signed in neat yellow cursive script by Gene Edwards in the 1940s.  I was a bit scared to even assemble the rod.  Rick kindly helped me out, and I was impressed with the delicacy and feel of the rod in my hand.  “Want to give it a few casts?” Rick asked, to which I hastily replied that I did.

We continued talking about fishing trips and rods, and I found myself laying out line in smooth, even strokes.  I can best describe the feeling of the rod as “pleasant”: a solid and sensitive feel in the hand but ready and willing to send the line as far as I liked.  I tested two more rods for comparison, a three-piece Gene Edwards model and a rod by a newer maker, Mark Ruhe.

The three piece Edwards felt heavy out beyond the handle, and threw line obligingly but without the smooth feel of the two piece.  The Ruhe rod, also a 7’6” 4 weight, startled me by briskly tossing tight loops right to any target I picked out in the yard.  Rick told me that a rod like that is meant for customers crossing over from graphite, and I felt it stood up well.  It was extremely light with a fast action.  However, I did not seem to connect with the feel of that rod like I did with the first one.

I pulled out of Rick’s place and continued south on Route 202 towards the Swift River.  The Gene Edwards Rainbow rod was safely in its rod tube in the back seat.  I had bought the first bamboo rod I had cast, something I had suspected might happen.  My wonderful wife had kicked me out of the house for the day with instructions to “go fishing,” so I headed onward to explore the cold waters of February.

I arrived at the Swift River, unsure whether I should test the bamboo in sub-optimal conditions.  Cold temperatures and cold hands might make for a poor outcome.  But, I could not resist.  I strung up the rod, and, at first, I was nervous that, while walking through the woods, I would trip and reveal myself as the clumsiest owner of the rod in the past eight decades.

I stepped over the ice on the margin of the river and started flinging a dry fly wherever I pleased.  Excitement quickly replaced any thoughts of anxiousness.  The smooth feel of the rod was a pleasure to cast and the idea that this rod was an “antique” quickly receded; it was a wonderful fishing tool.

I figured, even in February, I had a chance to scare up a brookie or two on a Caddis dry fly.  However, I failed to notice any insect life, and nothing was moving.  After about an hour of frolicking I found a pod of three rainbows in a deep run.  An egg pattern hung off of the back of the dry got a few looks but no takes.  I switched the dropper to a small rainbow scud pattern, and, to my surprise, on the first drift I was tight to a nice fish.

I happily played the fish, its crimson sides flashing, the cold water seeming to temper the usual tenacity of the fight.  As I slid the net under it, it struck me that as a self-professed brook trout nut I had just bought a rod inscribed “Rainbow,” and the first fish I had taken on the rod was a handsome ‘bow.  The fact that the fish swallowed a rainbow scud to initiate my bamboo kismet made me shake my head. 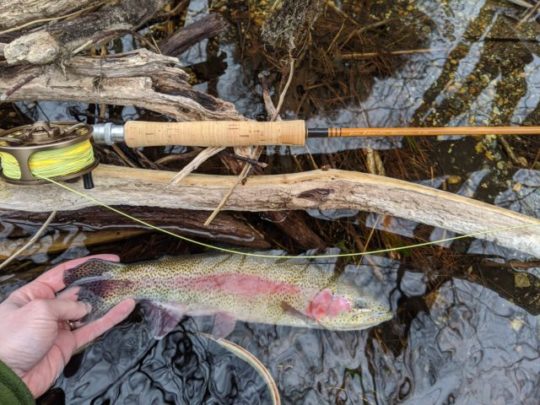 I have written earnestly about my attachment and appreciation for graphite rods; I am learning that many of the preconceived notions I had about bamboo were wrong.  Bamboo rods are not fragile, thick, heavy, slow, or even overly costly.  When you add the craftmanship and connection to the rod maker that created the rod by hand, it only adds to my enjoyment in using it.

It takes a bit of earnest thought to wrap your mind around the fact that a hand-made rod of natural materials can stand up to the latest man-made aligned fibers, ultra modulus blends, nano-particle resins, and taper technologies promoted by the advertising campaigns for the latest and greatest rods.

I am just beginning to discover bamboo rods myself, but bamboo rod makers have been refining their craft for over 200 years.  Catching and releasing that rainbow trout made me happy in that winter moment, with the long-term implication that I myself became hooked on bamboo.  I don’t want to be released any time soon. 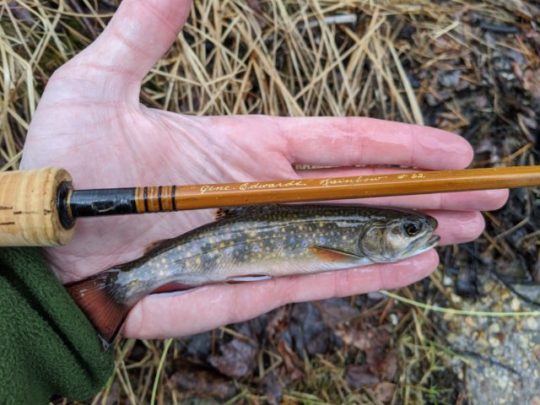