It wasn’t all wine and roses for my fishing outing at the Farmington. Shelf ice, one slip, cold water, and even colder rain made for an adventure. But, the bonus was that hardly anyone was out.

I started off at dawn chucking big streamers. It was a quintessential roll of the dice on a winter morning. I had tied up some Double Deceivers and wanted to see how they behaved. Steve Dally recommended the pattern.

Well, they were very well behaved, in fact, but drew no strikes. I threw other articulated bugs, too, ones that worked well in the fall, and they also weren’t touched.

At that point, Dave Machowski, the well-known Housatonic guide and all-around great guy, came up. We split water, and he proceeded to land fish after fish with his indicator set-up. That motivated me to switch rods and poorly begin to chuck the bobber.

I’m not a great indicator angler. Shortly after starting to fly fish regularly, I moved over to Euronymphing and went deep down that hole for a few years. Line control? Very little for me. A clean drift for many yards with an indicator? Not I.

Dave was very kind. He gave me one of his special flies and showed me a cool technique to extend my drifts. It was an impromptu clinic, and I’m very grateful for him. Soon thereafter, I landed two fish. That man is a miracle worker! He also had some great streamer-fishing advice.

After landing a pile of fish, Dave decided to move to a new spot. We shook hands, and I thanked him profusely. I offered to him one of my streamers, which he refused to take, and he was all generous and modest as always.

Soon, the rain started to come down, and I went back to streamer fishing. Might as well end the way I began, I thought.

I worked various edge seams and dark water. Low and slow, I thought, and retrieved the streamer with some very short and erratic strips. This went on for quite a while.

Periodically, I looked at my watch. I had to be back on the road by 1 pm in order to cook some mac ‘n cheese, which we were bringing to a couples’ potluck dinner. It is never a good feeling when you sense the clock ticking while you fish.

I rotated through various articulated streamers and then came upon the first streamer I had used that morning: an olive-and-yellow Double Deceiver with an orange throat made from Senyo’s Laser Dub (a tip from a Rich Strolis video). When wet, this streamer looks just like a six-inch brown trout. And, it really does look downright sexy when moving in the water.

A few casts in, I felt a grab. Miraculously, I strip-set correctly, felt movement, and had a fish on. I was all smiles. The Orvis Helios 3D seven-weight made for quick work, but I didn’t care. I actually got an eat on a low-probability technique on a cold day. 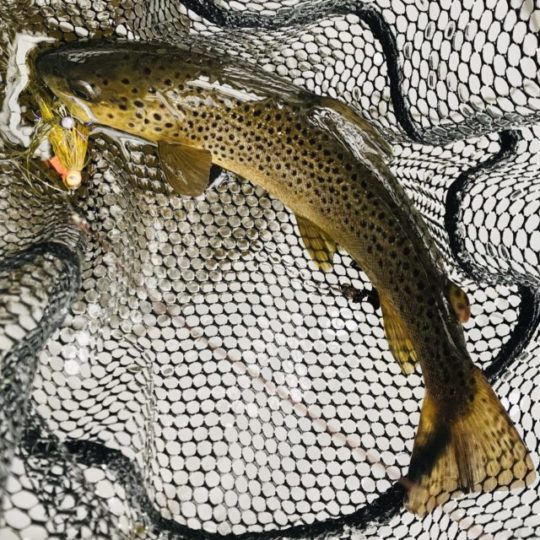 It was a clean-looking brown trout and of a decent size. Deceived by the Double Deceiver. Victory, at last!

I gunned it back, slid safely home, and started to cook. The mac ‘n cheese turned out great. It included cheddar, Gruyère, and Parmigiano-Reggiano, as well as panko crumbs. It’s about 700 calories a serving, but who’s counting?

The Double Deceiver worked, and I am so looking forward to my February trip to Arkansas’ White River. I hope to see a monster brown while there…. 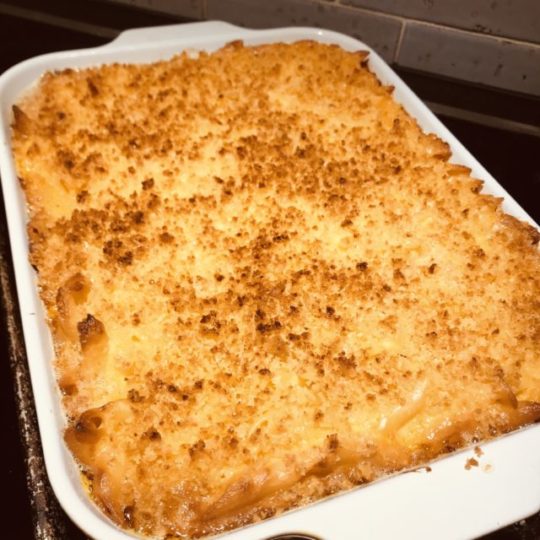 5 thoughts on “To Deceive”