South Carolina was a blast!

I went down to visit my close friend Colby, who like me, is a madman when it comes to fly fishing. We fished a couple spots hard last year and landed some nice fish, but we barely scratched the surface.

The plan this time was to explore new spots and fish harder. Due to the hectic nature of my vacation, I couldn’t write posts for each fishing day. But a three-hour layover is better time that any to give my synopsis.

DAY 1
On Friday, we fished the delayed harvest section of the Chattooga (last year’s post here). This stretch of river is ideal trout water, with deep pools, fast runs, and long glides. Plus, it is PACKED with fish.

The fishing started off a little slow, but ramped up quickly around lunch time. We caught fish on nymphs and streamers early on, but found some risers later in the afternoon. Unable to resist the urge to throw dries in January, I took off my fast-sink poly leader and replaced it with a tapered leader. All sorts of bugs were popping off, including stoneflies, caddis, blue winged olives, and midges.

Luckily, the fish weren’t too selective, and we caught oodles of fish on different flies. Once the fish got wise to us, we worked our way back downstream. For kicks, I decided to swing streamers through some of the likely spots I skipped earlier. Fortunately, it worked and I caught a few more bows before calling it.

DAY 2
The next day, Colby took me to a favorite wild trout stream of his. He hadn’t fished it since the summer, but I was insistent. 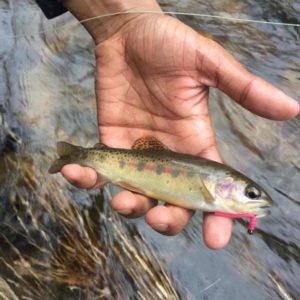 The stretch we fished was a typical high-gradient southern-Appalachian trout stream with rhododendron-choked banks.

It lacks a sizeable fish population due to the presence of impassable natural barriers upstream and downstream, but it makes up for it with larger-than-average fish. That said, the fish can be quite selective due to lack of competition. 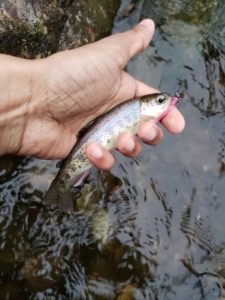 Fortunately, we both landed a couple fish early on.

Overall, the fishing was tough. We fished hard at all the likely spots, but only a few spots produced.

The fish we caught were quite beautiful, though, and some of the browns were surprisingly large. There was a steady, heavy rain all day and the river was rising. Larger, brighter patterns like Squirmies and Mops produced best.

Eventually, the rain got to us by lunchtime, and we called it in favor of Five Guys and dry clothes.

DAY 3
Today, we fished a couple spots early, so that I could catch my evening flight home. The first stop was a small brook trout stream that shall not be named. The previous day’s rain raised the stream quite a bit, but the water was surprisingly clear and somewhat fish-able. However, the higher water made accessing some spots all but impossible and we could only fish a couple spots. Luckily, we both hooked one fish each and I landed my first southern Appalachian brook trout.

The next stop was a nearby stocked trout stream. With a little more than an hour left, we fished an easy-access spot. I caught a few small fish early on before Colby wanted to try tightlining. So, after a quick lesson in casting and reading the sighter, I let him fish as I sat back and coached.

Luckily, he was a really quick learner, and he tied into a few in short order. On the way out, we spotted a few large fish feeding in a shallow tail-out. Tempted, we both took turns casting to them.

They behaved just like Swift River fish; they would turn to our flies and refuse last second. After multiple fly changes, we finally got some takes. There is no better way to end a great trip than by sight fishing to massive trout, IMO.