As you may recall, I started fly fishing more regularly in 2014 and fished the Swift to cut my teeth. After learning both indicator nymphing and “dries or die,” I eventually succumbed, like some do, to Swift River Burn Out and started heading elsewhere, where I could find bigger wild fish.

But, with a dinner tonight, I didn’t have the usual schedule flexibility and thought the Swift would be a great option and, also, let me reminisce about my rookie days. Many people have helped me progress along in my fly-fishing journey, and I’m very grateful to them.

Last, I wanted to see if the flies that, years ago, reliably produced would still work today. 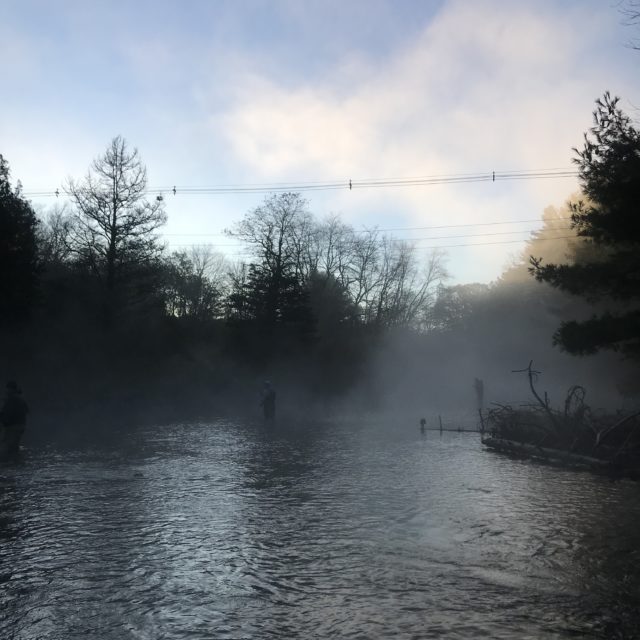 I arrived at the Y Pool (a prior post on “lessons learned” here) extremely early. It was beautiful and foggy.

I doggedly stuck to my wet-fly game (am not a personal fan of bobbers), even though it was 36 °F and there were no bugs. I spied some fish lined up near a trench and positioned myself above them. At the Swift, I think less is more, and so, I opted for a single-fly approach.

After many casts and some fly changes, a big fish splashed, my rod bent, and a large rainbow took off and jumped. After a bit of drama on the fish’s part, a beautiful rainbow showed itself. It took a size 22 CDC soft hackle, one of my go-to flies at all rivers. 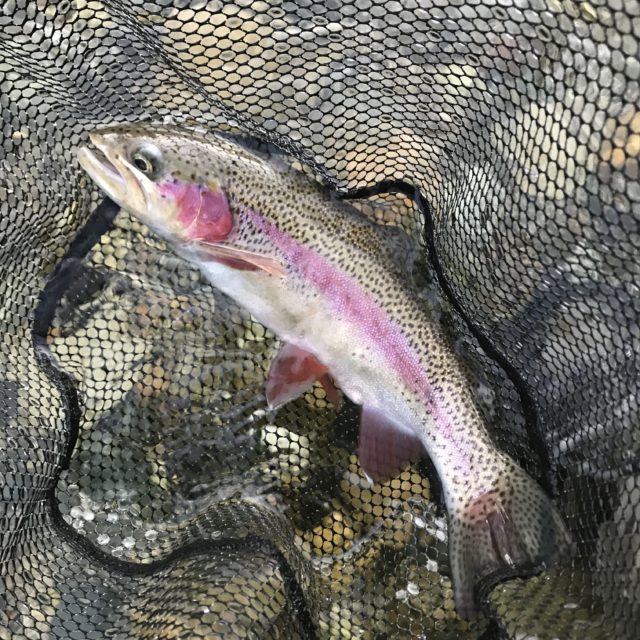 I was quickly shoe-horned into one lane, as more and more anglers showed up. So, once the wet-fly approach stopped working, I reluctantly put on a bobber and floated small flies. Thankfully, that soon ended when I spotted a few rises and quickly switched to dries, pricking some fish and landing others with a size 30 Midge Emerger on the totally kick-ass Gamakatsu “Big Eye” C12-BM hook.

After that, I put on a poly-leader and chucked streamers, just for kicks. After a drought, I decided to “naked nymph”: one fly, no weight, and no bobber. I took a few fish, including some brookies and a big brown trout that taped at 17″. That was The Fish of The Day. It fought hard and dove for the weeds repeatedly.

Once the action died down, I decided to head down to The Pipe Area (our free guide here). I’m not sure what the hatchery was releasing, but it smelled quite a bit on occasion. Some of the hatchery folks call that area “The Toilet Bowl.” I think they’re on to something!

The midge pupae and larvae patterns that worked well a few years ago continued to work well today, and I saw quite a few good-sized rainbows. Then, I reeled up to start to head home.

At the dirt parking lot, I ran into some first-time Swift anglers from Albany, NY, who were really nice and asked for advice.  I gave them some of my go-to flies, and we chatted a bit about steelhead fishing, of which they do a great deal. It was nice to meet such thoughtful and polite folks.

I gunned it home to shower, eat a 4:30 pm lunch (I hadn’t planned on staying so long, but the fishing was good), and ready for a dinner gathering.

It was a fun “back to basics” outing. There are much better fisheries elsewhere, IMO, but it was nice to go back to the Swift. I also crossed paths with two of the “regulars,” too, Bill R. and Dan Trela. It was great to see them.

I hope you’re all having a great weekend….