I rarely fish on Sundays but was able to fulfill my personal and family obligations yesterday, and so, headed to the Farmington early to be on the water by dawn. I entertained thoughts of going to the Swift, but Alex Bagdonas was there yesterday and kindly told me that it was a zoo…on a hurricane-passing-by day. 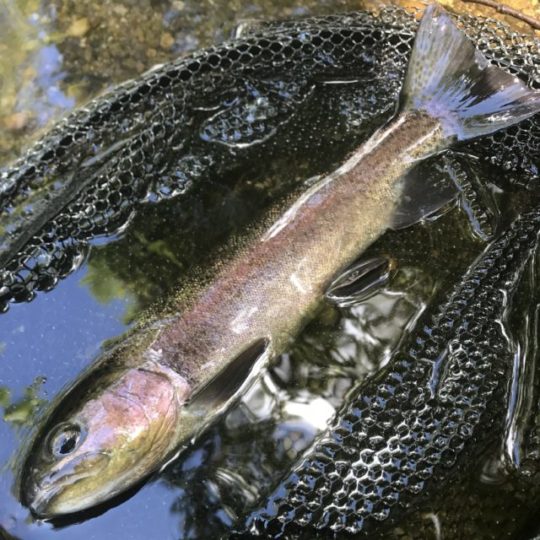 At the first spot, I left the Euronymphing rod in the car. 2019 has been a “project year” focused on streamers and wet flies, and so, I brought my trusty H2 #4 for that mission. I also carried with me my #000, as it’s always good to have on hand a dry-fly rod and perpetuate “hopes and dreams.” Plus, the flows were very low, a positive omen in my book.

First up, wet flies continued to rock. Whether it was slow water or faster water, swinging three #20 to #24 small soft hackles and/or midge pupae today did very well. At one stretch, I had a take every cast or two until the fish wizened up. I’ve really enjoyed throwing wets this year and have learned much. I only wish I had learned to do it correctly years ago.

As at Pittsburg, NH, last week, small flies with a touch of red did very well for some reason. And, midge patterns with a small tuft of Glamour Madeira No. 8, denoting an emerging bud of wings, also duped more trout than usual.

Now, to the Trico action.

As I was swinging wets, I looked downriver and happened to see from afar a curious site: some trout gulping bugs. For me, that’s a tell-tale sign of Trico spinners on the water. I first saw this phenomenon while fishing in Montana one hot August as a relatively new fly angler and have never forgotten it. You know when you put food in an aquarium and the goldfish go the top and just greedily gulp over and over? That’s what it looks like.

So, eyes bugging out of my head, I hustled downstream, switched rods, and tied on a Trico spinner dry. When that didn’t work, I put on Ed Engle’s Sunken Trico Spinner and added a little bit of floatant to it. This fly does well for me during Trico spinner falls, as it did three weeks ago. In fact, one hot morning a few years ago, that pattern landed over 20 trout for me in just a few hours.

I cast and cast. This was the most technical fishing I’ve done in a while:

It was tough! But, I love throwing the small stuff. It wasn’t a huge spinner fall, but it was enough to get fish moving.

With the bright sun, I could clearly see the trout cruise around, react to my fly and periodically eat a spinner. It was like watching a giant aquarium!

In the end, I duped a few fish but not as much as usual. I recall reading that trout get more fussy as the fairly lengthy and intense Trico hatch season progresses. They learn very quickly what doesn’t look right. Clearly, they’ve learned a lot the past three weeks since I last fished the pattern.

Soon, the spinner fall ended, the trout again hunkered down, and I decided to jump back in the car. I closed the day by tightlining a few runs and landed some good-sized fish, including some very dark rainbows.

No giants today, but a Trico spinner fall is more than enough for me. Christmas in September.

8 thoughts on “The Small Stuff”