T’was a quick session today at the Farmington.

I started off swinging wets and connected right away with some fish. As we head towards the end of meteorological summer, the trout have been more picky. I really had to work for them this morning. And, one trick I learned was to position myself far away. The trout clammed up when I got closer.

No Tricos today, but a few Isos popped early, and there was a significant midge hatch.

At one point, I heard a splash and felt an immediate take after a cast. It was a good-sized fish that pulled hard and made me follow it down river. It ended up being a buttery buck brown with a huge adipose fin. It took a size 16 Mighty Midge. It’s hard to articulate how beautiful a clean-looking fish looks.

With that out of the way, I started to test some new flies and didn’t get any bumps. Worth trying, though.

Once rises started, I switched to dries and caught a few small fish. Dinks on dries, but they sure were pretty, with a brookie and a salmon parr among the browns. The fish were keyed in on spent midges.

After a few hours, I reeled up and went to explore a spot to which I haven’t been in a few years. Was skunked, but that was ok. I was getting very tired and realized that it was past lunch time. The sun was really bright, it got hot, and I didn’t feel motivated to fish more. I suspected the fish would be hunkered down until later in the day as the air temperature approached the 80s. 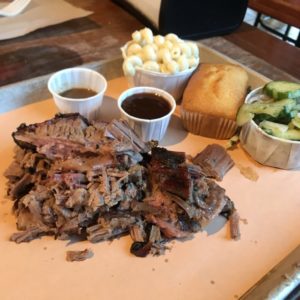 I instead decided to swing by B.T.’s Smokehouse for a late lunch. I mean, how could I not order (for the first time) the succulent brisket, creamy mac ‘n cheese and bracing cucumber salad?

The lot was packed, and the line was very long. And, it took a while to get my food. But, I can think of no better way to commemorate a tough fishing day than with down-home cooking and being enveloped with the scent of smoked meat and spices. It was some of the best brisket I’ve ever had, and I’ve had a lot in my life. Worth the wait.

I hope everyone is having a good weekend. Fish, eat and prosper, my friends.