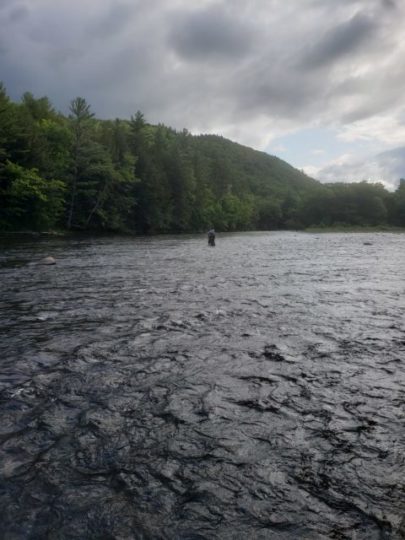 We awoke early the morning of camp to fish before registration at 10:30. Despite only getting five hours of sleep, we were full of energy.

There is something about waking up at first light in the morning that is indescribable. The sights, smells, and feel of the crisp morning air are soul cleansing and almost magical. That, and, of course, the fishing.

Since Robert invited me to camp with him and Griff the night before, I decided to repay the favor and bring them to a favorite spot on the Androscoggin. After a quick stop at Dunkin’, we hightailed it to the river.

The fishing started a little slowly at first but rapidly picked up. We brought to the net a mix of wild and stocked bows and a lone brown on terrestrials, dry-droppers, and nymphs. Almost every spot that looked like it held fish usually did.

I found all my success tightlining, and my few drifts with a dry fly through likely water went unnoticed. A lot of takes were incredibly subtle and felt like hang-ups until I set and all hell broke loose. 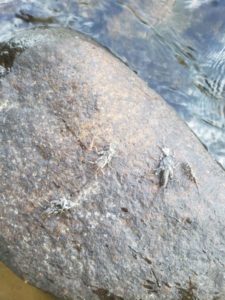 Oddly enough, all takes on my Prince jig ended up fouled on the gill plate or outside of the mouth. I don’t know if fish bumped and rejected it or spit it out right as I felt the take.

It was extremely bizarre.