Well, this has been a very different season than I had hoped, and it’s very clear that the striper population decline is pretty serious.

I have several very competent surf-casting buddies, and our stretch of Massachusetts’s South Shore has been very tough to find fish over 30 inches, let alone fish over 40 inches.  I have learned some new things for sure and will try to convey them in hopes that they’re helpful to you.

The Cape Cod Canal Break Up

I made three trips to the Canal in June after my spring area finally dried up.  I actually caught fish on two out of three trips, but on all three trips I had very overall negative experiences due to my interactions with other anglers. Between seeing/reporting blatant poaching that was not addressed to getting threats of violence over a particular rocky spine I had occupied three hours before a group of six anglers showed up at dawn, I was getting really mad.

A major part of why I go fishing is for stress relief, and it was quickly becoming apparent I needed a change of scenery.  I decided to focus on a four-mile section of coast, including an inlet near my home that I was familiar with, but did not know very well. So, I decided it was time to dial it in.  As with any new area, there was a steep learning curve, but I have found some very interesting and diverse terrain that does produce fish through the summer doldrums.

I decided this season to throw only large flies, ones 10 inches or longer.  The main reasons for this experiment were that I last year finally broke 40 inches, and I caught more fish over 30 inches in a season then I ever had.  Most those fish came from throwing flies in the eight-to-12 inches bracket.  It was my first year using really large flies, and it presented a lot of challenges.  However, there was just too much work to get through and, with only 60 total trips in a typical season, I decided the only way to fix them was to stick with big flies the entire year.

Ultimately at this point, I am well on my way to having the skill sets developed in #1 to #4, and I have pretty much determined that, while you may get hits from smaller fish, certain fly sizes seem to keep you from hooking smaller fish. 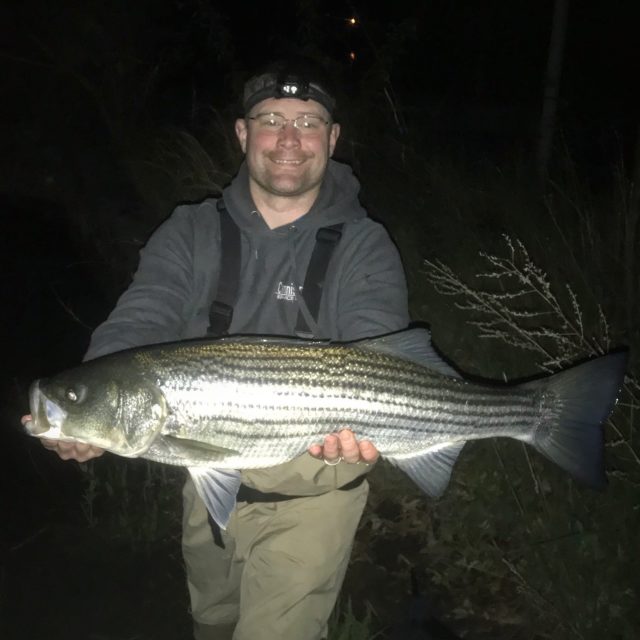 From May 1 to July 31, I have conducted 35 trips between 10 pm to 6 am while fishing huge flies; this has yielded 19 skunked trips, 61 striped bass caught, 18 fish over 28 inches long from that group, no fish under 20 inches caught on big flies, and, last, while I have gotten close, I have yet to break the 40-inch mark this season.  On many of the skunked trips, I did get several strikes but came up empty on the hook sets, and, at this point, I am pretty convinced those were all fish under 30 inches.

Observing fish close in at sunrise revealed that smaller fish tend to chase a fly and attack from the rear; so, a front-hook placement means you do not hook them.  If a 20 to 30 inch bass attacks the fly head on, you will hook them most of the time. This is common when fishing flies on the swing, but during a stripped retrieve, smaller fish tend to attack broadside or from the rear and fail to get hooked.

So, it has been my experience this season that a fish under 30 inches will not get hooked when it strikes a fly that 10 inches or longer.  But, there are always exceptions. I had my most bone jarring hit come from this 22 inch fish, which took a 14 inch Ian Devlin Synthetic Slammer bunker fly head on.

I did conduct four trips separate from the 35 big-fly trips, during which I threw small crab flies, standard clousers, and a small-fly searching rig I will talk more about further down.  On those trips, I caught 72 striped bass, and they ranged from 14 inches to 26 inches long. None was a keeper, and the majority were 14 to 19 inches.

Now, I am not saying that you must throw large flies to catch large fish because you can find big fish feeding on smaller bait, and matching the hatch can be very important.  In fact, for a while, my personal best was a 37 inch bass caught on a sparse four-inch clouser sand-eel imitation.  My point is that if you throw really large flies you will not catch many fish. So, if you choose to go big, understand that you are going to strike out frequently, and you need to be at peace with skunking on those trips.

This year, I ditched intermediate lines for full sink or floating lines.  Switching to the floating line has allowed me to work top-water sliders at a very slow deliberate pace just fast enough to push a small wake.  Because of the ability to really slow down the presentation speed, I have gotten more top-water bites at night then any other season.  I am still working through fly configuration and hook placement to get the strike-to-hook-up conversion rate better, but top-water at night has been a major producer this season for me.

So far the top fly, with the front head on a shank and middle hoop placement has had a much better hookup conversion rate that the flies with the front hook placement.  All the flies are Rich Murphy’s “Quarter Moon Special” fly pattern tied by me with some minor modifications/variations.

One night, the middle fly went 0-for-16, but several times I felt fish pulling on the fly when I set the hook.  What I found was the middle foam section had marks and had been pulled down over the tail section’s swivel.  Hence, I now target hook placement further back in the fly.  I have also added soft Velcro to the flies’ tops, which seems to give you a second or two longer to get that hook set in.  I got the idea from a pro bass fishing frog lure. Just look up “Frog Fur”.

I have now tried swinging crabs on a sinking line, fishing crabs along bottom with a full sinking line in slow current areas, and fishing crabs under glow-in-the dark indicators like large nymphs.  They have caught a lot more fish than I expected at night, and one estimated 37 inch fish.  In particular, one key thing I have found is to always look for molting crabs when wading at night and, when you find them, switching to indicators. Rocky structure or steep sod banks adjacent to where I found the soft crabs has been killer.  Two-inch wide olive Merkin’s crabs under indicators have yielded 27 fish this season in the 20 to 27 inch bracket. My big four-inch wide crab fly got the one big fish and one 27 inch fish. 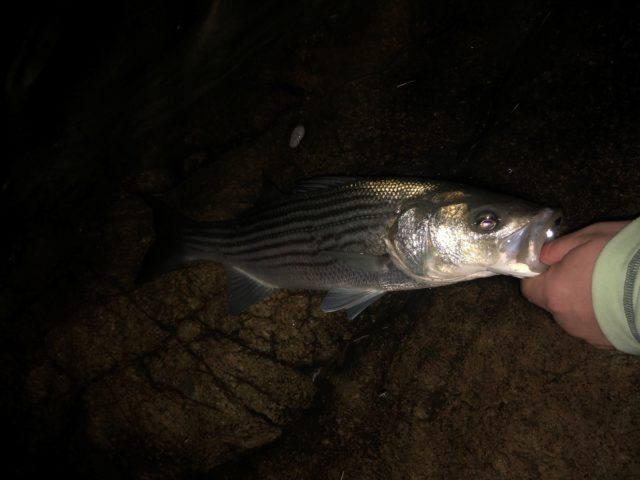 When the molting crabs are not present, fishing a crab fly at night can work, but it does not produce nearly as much action as when you find the soft shelled green crabs.  So, I now carry the indicator gear with me, and, if I fish soft crabs, I make a switch to indicators.  It’s very important to focus on areas with good current for this approach because fast currents can dislodge a soft crab. Also, when the crabs have hard shells, the current will not dislodge them at all.  I have watched them move around the rocks just fine despite the intense current speed so this tactic is not something you can pick a date and go execute.  You need to always be checking for crabs when fishing and be prepared to execute when you find those soft shells.

I use a 10 to 12 foot long straight 25 lb. leader set up with a double surgeons loop at the end.  I clinch knot 20 lb. tippet to the loop and place my size B split shot between knots so they don’t slide.  I will adjust the indicator to 1.5x the water depth, which you have to know in advance at each stage of the tide since at night you cannot see depth well.

Charge the 3/4-inch Thingamabobber indicator with a cheap UV Pet urine flashlight, as it will preserve your night vision and get the indicator glowing well in a few seconds.  I prefer unweighted or very lightly weighted crab flies that tumble in the current along the bottom.

On some nights, over the last four years, I have observed intense night surface feeds during which I was blanked. This year, I decided that when that bite happened again, I would solve it and put big flies aside to do so. 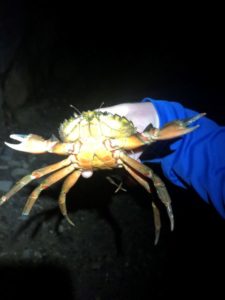 I borrowed a three-fly rig from Steve Culton, who contributes to Stripers Online and has his own blog called CurrentSeams.com, which is excellent.  I fished a silverside imitation, a worm fly, and one-inch shrimp fly.  Much to my surprise, I finally caught fish during this event in 2019, which had thwarted all my efforts in prior years.

Of the three flies, all 14 fish landed took the one0inch shrimp fly in the dark and did not touch the other two flies.  This showed me that a striped bass has no problem finding a small target and being hyper selective to fly size, even at night. There was one larger fish that unfortunately broke me off that I suspect was in the 29 to31 inch size class.  So, while I have been doing this big fly experiment most of the season, next year I am going to also prospect at night while matching the hatch.  This shrimp hatch seems to happen on the waxing quarter moon end of June every year and it was very satisfying to finally solve it.  Thanks once again to Steve for sharing his rig and presentation style with that Stripers Online post!

Tight lines to everyone out there. It has been a tough season for me, but I have learned exponentially this season. So, i’ts all been worth it.